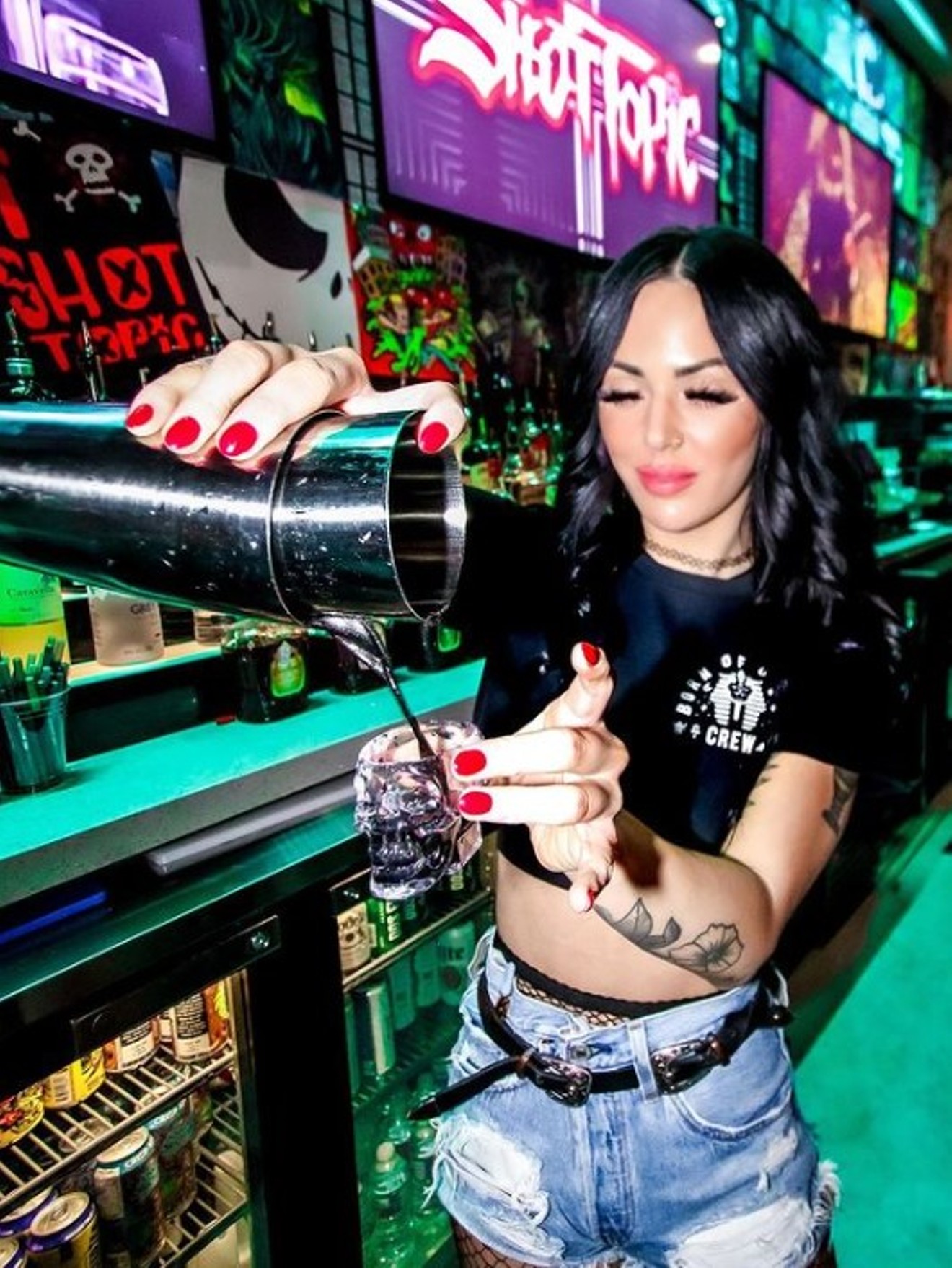 A bartender pours a shot of "The Taste of Ink" at Shop Topic on Crowdus Drive in Deep Ellum. Courtesy of Specialized Collective
Even if some of us long for the past, it's probably a good thing that time travel doesn't exist in this dimension — countless movies have taught us the perils of trying to relive our past by messing with the space time continuum.

There is a safer way for millenials and Gen Xers to relive the raucous, loud, sticker covered days of their youth without causing sudden merges in the multiverse: Shot Topic, a new shot bar on Crowdus Street in Deep Ellum, opened earlier this month. The bar name is a reference to Hot Topic, the retail store favored among Avril Lavigne wannabes and skater boi types, and pays homage to the emo rock wave of the late '90s and early 2000s.

Corey Good, the co-owner and creator of Shot Topic with Danny Wilson, Jacob Cox and Colton Kirby, says the concept started with the idea of a shot bar in Deep Ellum when the perfect name landed in their brains.

"We originally played it as a different concept with the name and brand," Good says. "My business partners were playing with the idea of the named Shot Topic and I was like, that was my whole era. I was on the Warped Tour. I grew up as an emo as a kid."

The theme of Shot Topic, a play on the emo style and pop culture mall apparel store chain Hot Topic, is dripping with emo from its slogan ("It was never a phase!") to décor and ambience. The wall of the main bar area is decorated with band T-shirt displays like you'd see on a Hot Topic store. DJs spin songs and the TV screens show music videos from records by emo legends like The Used and Panic! At The Disco. There's a selfie area complete with an amp wall and music instruments so guests can photograph themselves in a brief moment of emo rock glory.

Even the bathrooms are made to look like outdoor port-a-potties covered in band stickers and posters like you'd see at an outdoor music festival, minus the smell, of course.

"Just the vibe and ambience is so different and diverse," Good says. "We have a lyric wall where people can write their favorite lyrics and we'll paint over it every week so people can write on them again." 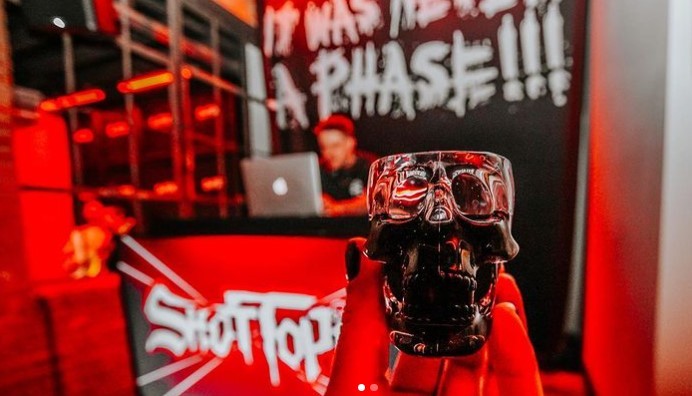 Shot Topic's menu has emo band themed drinks like "The Taste of Ink" inspired by the song of the same name by the band The Used.
courtesy Specialized Collective
The shot menu read like a list of drinkable emo rock references.

One of the most popular is The Taste of Ink, a potent reference to the most famous song by The Used that's served in a skull shot glass with black dye and edible glitter.

"The shots are specialty themed from the lyrics of our favorite bands," Good says. "All the drinks are named after different lyrics or artists from that timeframe."

Shot Topic has only been open for a couple of weeks but it's already achieved a level of weapons-grade infamy thanks to TikTok and Instagram. A video compilation of nights at Shot Topic that appeared on TikTok just two days after the shot bar's opening has amassed more than 136,000 likes.

Good, a Deep Ellum bar creator who also opened and operates places like the Select Start arcade bar, the Crowdus retro dancer bar and the Cross Faded barber shop and speakeasy (originally called High & Tight), says the response to Shop Topic has built a line outside its doors every night since its opening.

"I think it's just something Deep Ellum needs and wanted," Good says. "Every bar's go-to is the same top 40 or hip hop and rap. This is for people in their late 30s and 40s and all the music they grew up with."
KEEP THE DALLAS OBSERVER FREE... Since we started the Dallas Observer, it has been defined as the free, independent voice of Dallas, and we'd like to keep it that way. With local media under siege, it's more important than ever for us to rally support behind funding our local journalism. You can help by participating in our "I Support" program, allowing us to keep offering readers access to our incisive coverage of local news, food and culture with no paywalls.
Make a one-time donation today for as little as $1.