The Gibson Guitar Docuseries Is a True Lesson in Music Appreciation 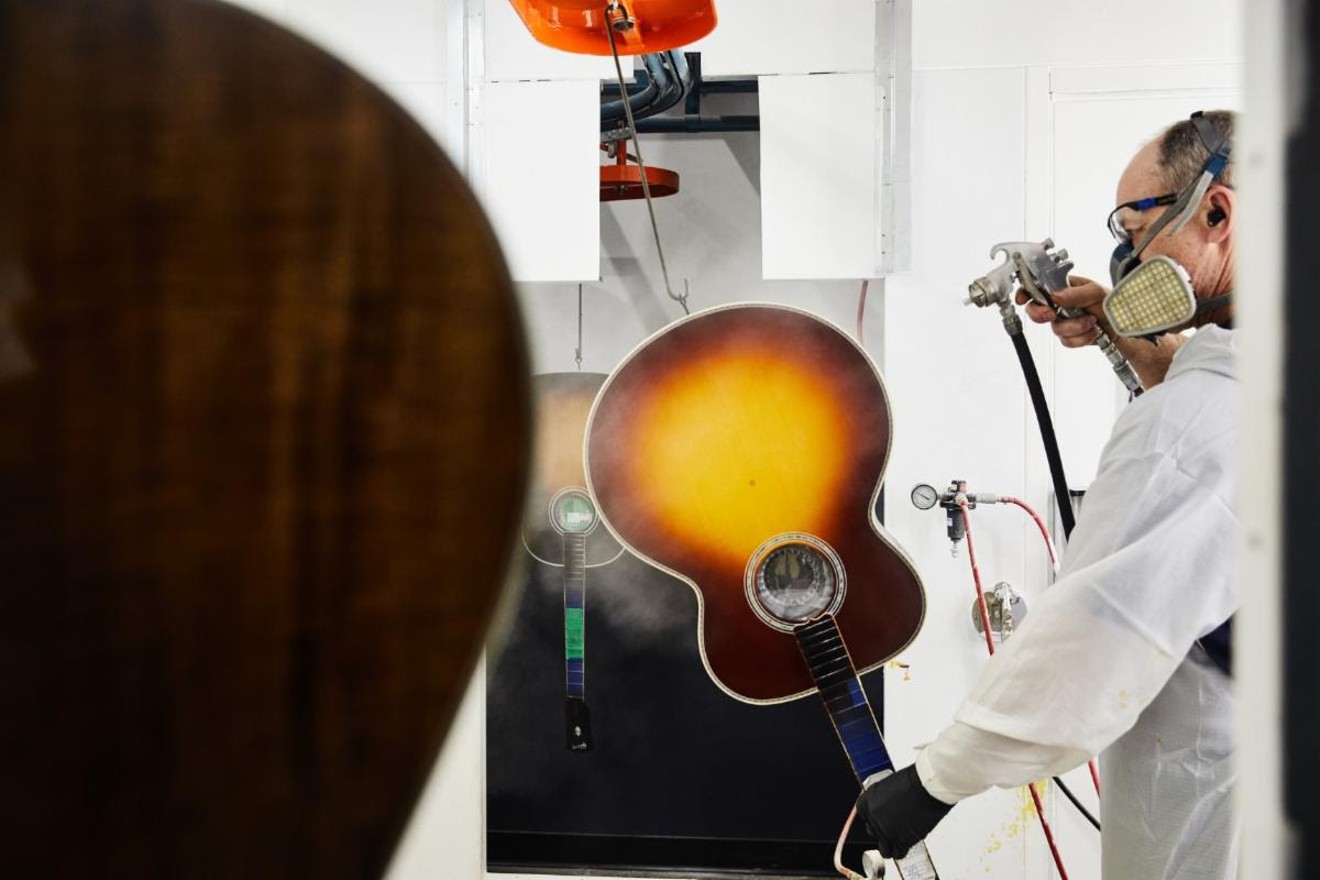 You've heard the name, and you've enjoyed the sounds of many Gibson guitars. A docuseries on the brand captures the magic of guitar-making. Courtesy of Gibson Brands
For decades, Gibson built its acoustic guitars at a factory in Kalamazoo, Michigan. Artists such as B.B. King and Johnny Cash made the instruments famous. Mandolin designer Orville Gibson opened the factory in 1917 but didn’t start building guitars until shortly before World War II, when jazz dominated the airwaves.

In 1985, Gibson moved its factory to Nashville, the home of country music, a genre known for its acoustic slingers. But the guitar manufacturer didn’t take into account the humidity that suffocates the music city, as Don Ruffatto, the product development manager for Gibson Acoustic, pointed out in “Tops Backs and Sides,” the second season opener for Gibson TV’s award-winning docuseries The Process.

A couple of years later, Gibson purchased a small mandolin factory, Flatiron Mandolins, in Bozeman, Montana, and moved the acoustic factory to that location, where humidity is about as rare as snow in Texas.

“Their mindset was that if they can build mandolins of that caliber in Bozeman, we should try acoustic guitars,” Ruffatto said on the episode.

The initial episode of the series' second season opens like a scene from Yellowstone on the Paramount Network, with the rugged, mostly untamed Montana wilderness looming. Gibson’s black factory, known as the Gibson Acoustic Craftory, appears in the frame like the monolith in 1968’s 2001: A Space Odyssey. It contrasts starkly against the historic buildings in the neighborhood that surrounds it and brings to mind a place where defense contractors would roam and not one where luthiers and factory workers pour Gibson’s hand-craftsmanship into guitars.

Each frame that follows in the first episode unfolds like an onion being peeled by a publicist and a marketing team. It captures rugged-looking artisans in the various stages of production for a coveted Gibson acoustic guitar, which can range in price from $2,000 up to $6,000 for the kind that sings like a hummingbird.

As Cesar Guiekian, Gibson brands president, claimed in a Jan. 5 press release, “Several features [make] a Gibson acoustic guitar unique, such as the Gibson dovetail neck-to-body joint (with no bolts) which makes the body and the neck of the guitar become one, allowing the vibration to travel freely from headstock, into the strings, through the neck and straight into the body.”

“We continue to use hide glue, which absorbs into the wood cells and becomes part of the wood, making the neck of the guitar a tuning fork,” Guiekian added.

Episode 1 of Season 2 tackles the beginning steps of crafting these original acoustic guitars in a factory setting. Ruffatto said Gibson people pride themselves on doing more hand-crafted work on every guitar that they build than any other guitar manufacturer, although they do use CNC machines to rough-carve parts like the necks and the bridges.

“Almost everything else is done by hand,” Ruffatto said. “Every piece of wood is hand-sanded to final thickness and final smoothness. Every piece, every part is hand-assembled.”

“Every guitar is uniquely different by the hands that had touched it, which is the art of building a fine orchestral instrument,” Johns said in the episode.

Johns gave kudos to the engineers and explained that the science they’re implementing by using technology like the computer-controlled cutting machine has allowed them to modify the inlay patterns so that they fit better than before.

Jamie Vahala, a Dallas-based musician and writer, says he still plays the vintage Gibson he inherited from a family member.

"My Gibson B25 acoustic is a student model from 1960 that used to be my uncle's once upon a time; when it came out it was on the cheaper side but holds up just as much as a Hummingbird or one of their higher-end ones," he says. "So it's more out of some vague romance, but I wouldn't trade my Gibby for the world."

"Gibson guitars are well built and do have wonderful tones that are unique to the brand, but the real reason I use Gibson guitars is for the unmistakable feel," Pickard says. "Other builders can and have made instruments that borrow exact specs from any given Gibson model, but they just don’t feel the same. Only a Gibson is good enough."

The company has recently modified the physics of the guitar necks, which Johns claimed helps the guitars to play more consistently than ever before.

“And we can build more of them,” Johns said.

“Almost everything else is done by hand ... Every piece of wood is hand-sanded to final thickness and final smoothness. Every piece, every part is hand-assembled.” – Gibson's Don Ruffatto


In the episode, Ruffatto and Johns discussed the importance of tone woods — usually maple, mahogany or rosewood — for acoustic guitars. Different tone woods, they said, affect the acoustic guitars' tonally as well as their appearance.

“With a Gibson, you get a balance of lows, mids and highs,” Johns said. “And I have to accentuate the fact that Gibson has such a strong mid-range, which is where the information is very, very precious for an acoustic guitar because that’s where the most expressive information lies for a player. And that’s what a Gibson offers.”

Not so surprisingly, The Process didn’t showcase too many overworked, stressed-out Gibson factory workers working long hours in monotony to meet the increase in demand on a delayed schedule still recovering from the COVID pandemic. That was the claim of a North Texas man (who asked to remain anonymous) who worked at the Bozeman factory.

His first day at the factory didn’t unfold like an episode from The Process. It sounded more like a scene from The Office. A $4,000 guitar was possibly ruined.

Similar to the artisans who appear in The Process, the anonymous Gibson employee had nothing but good things to say about working at the Gibson factory in Bozeman and the people he worked with. Yes, the hours were often long. Yes, the tasks sounded as monotonous as the ones faced by other factory and warehouse workers in North Texas.

But it wasn’t all tedious. He got to try some of the positions highlighted in the first episode. Sanding guitars is a fine art, it turns out.

There were also some perks, like a Gibson guitar discount, a bonus for recommending job seekers and random drawings for the expensive Gibson brands. (Epiphone is Gibson’s brand for poor people.)

Though he loves playing electric guitar — and has been known to sleep with one (not a Gibson) — it was the hourly pay rate, the overtime and the benefits that had him singing the highest praise for the guitar manufacturer in Bozeman.

At nearly $30 an hour, Gibson does seem to pay well, especially if you’re like our source: single and living with several roommates.

According to PayScale.com, housing expenses in Bozeman are 59% higher than the national average. The median home value is $589,000, which means, according to XLCountry.com, a Gibson factory worker would need to earn $120,000 per year for a family of four to live comfortably in Bozeman.

“It’s a cool place to work, man,” our source said before he left Texas. “It’s cool. I could probably get you a job there.”

After watching The Process’ first episode of the second season, I may have been tempted to accept his offer if Gibson were paying those wages in Denton, where $62,000 per year will at least get you off the Ramen noodle diet.

You can catch new episodes of The Process on Gibson TV’s YouTube channel, where you can also catch the first season and learn more about Gibson’s electric guitar factory in Nashville.
KEEP THE DALLAS OBSERVER FREE... Since we started the Dallas Observer, it has been defined as the free, independent voice of Dallas, and we'd like to keep it that way. With local media under siege, it's more important than ever for us to rally support behind funding our local journalism. You can help by participating in our "I Support" program, allowing us to keep offering readers access to our incisive coverage of local news, food and culture with no paywalls.
Make a one-time donation today for as little as $1. 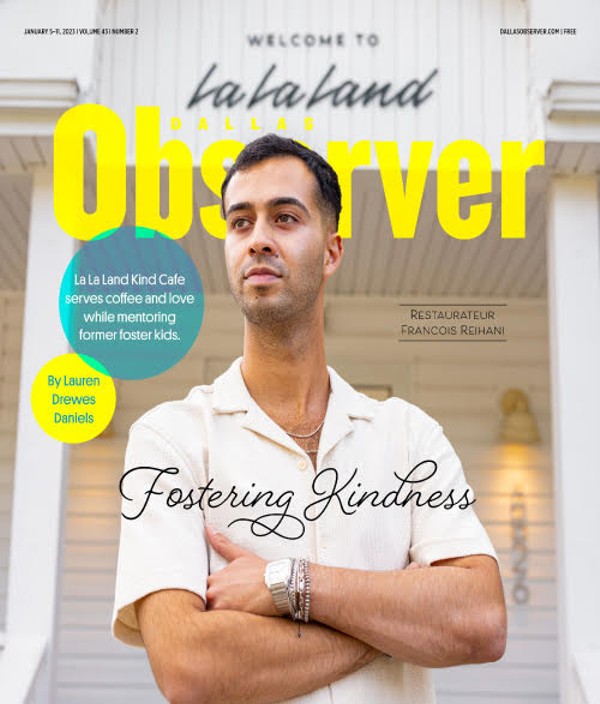