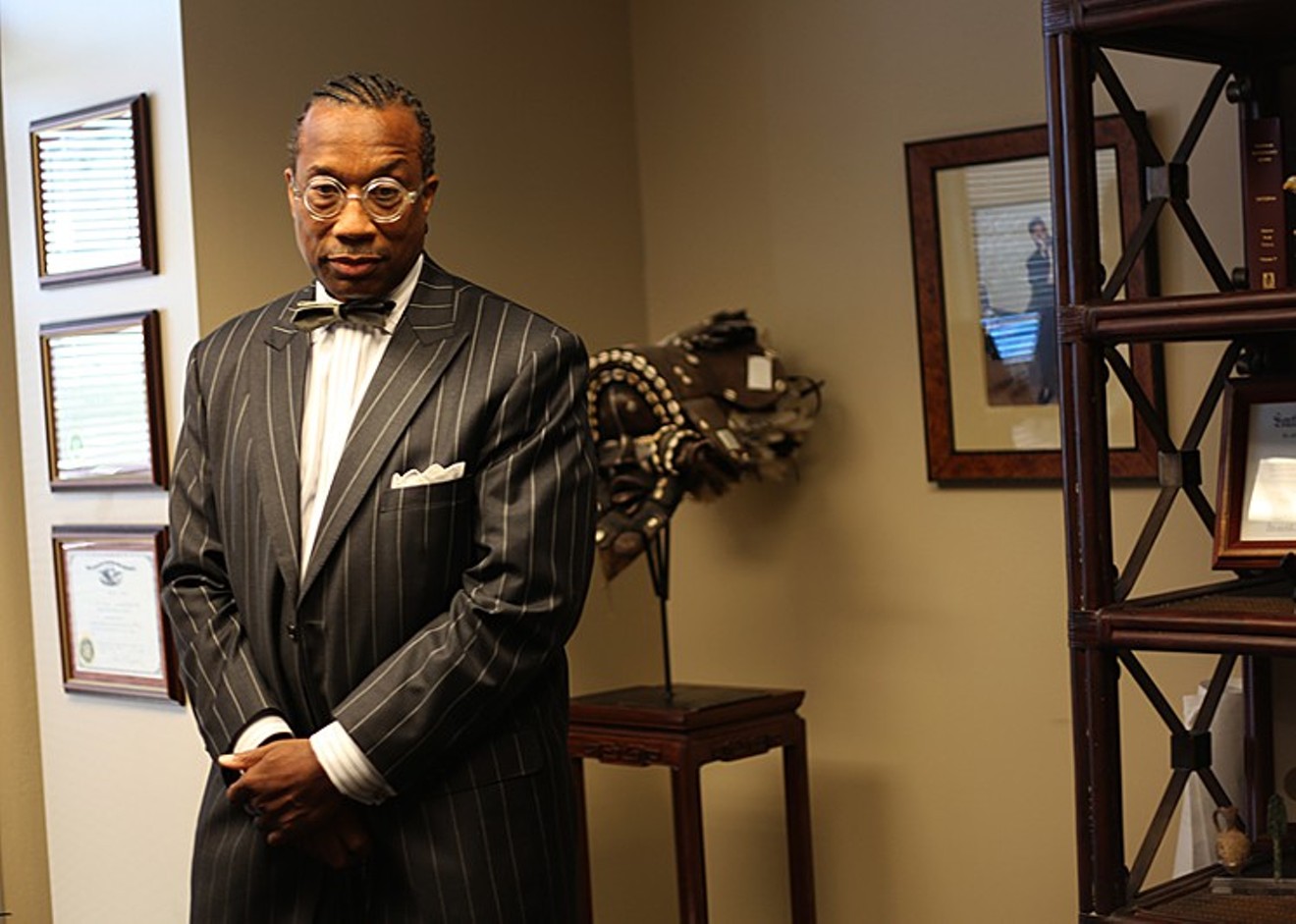 John Wiley Price in the offices of his lawyer, Billy Ravkind, five years ago. Alex Scott
Despite a couple of bumps in the road, Christian Campbell gave the federal prosecutors at the John Wiley Price trial exactly what they wanted.

Campbell was indicted in 2014 but copped a plea a year later. Om Wednesday he admitted on the stand that he gave cash to Kathy Nealy, Price’s political consultant, in order to influence the county commissioner’s vote and behavior toward his consulting clients. Those clients, Schlumberger and BearingPoint, sought contracts with Dallas County. Nealy and Price, Campbell said Wednesday, made sure that the businesses got them.

Campbell’s fate was tied to Nealy and Price’s in 2002, when he was a consultant for Schlumberger, a French company that wanted to win a $40 million IT contract from Dallas County. Campbell, according to reporters in the courtroom, said Wednesday that he funneled cash to Nealy in exchange for inside information that his client used to submit a bid low enough to secure the contract. Three years later, he said, Nealy helped another of his clients, BearingPoint win an additional county IT contract. Helena Tantillo, BearingPoint’s former CEO, has already been found guilty of lying to FBI agents investigating Price, and may testify later in the trial.

Tantillo, Campbell said during her trial, gave Campbell a check in 2004 for $7,500 knowing that the money would be split between Nealy and Price. Wednesday, prosecutors showed jurors a check from Nealy to Price for $2,500, made out the day after Campbell wrote the check to Nealy. Tantillo testified that she'd given Campbell the money so that he could donate it to the favorite charity of Price's fellow county commissioner, Mike Cantrell. The jury believed Campbell and convicted Tantillo, who was given just a six month sentence.

Campbell, the second prosecution witness this week who testified after being given a deal by the feds, said that he knew it was likely that money he gave Nealy would eventually make its way to Price.

“I believed [Nealy] had the ability to influence [Price] and get him to do things on behalf of her clients, that she was likely paying him,” Campbell said. “Because of the things she said and the way she acted and different comments and threats and suggestions.”

The threats, Campbell said, came when he failed to promptly pay Nealy.

“She would make general threats. ‘They better figure out how to get me paid!’ ‘M-effers don’t understand!’ ‘I could make things bad for them!’” he recalled Nealy saying.

On cross-examination, one of Price’s lawyers, Chris Knox, probed Campbell, who admitted that he’d padded expense reports and never actually given Price a bribe personally. Still, Campbell maintained, he knew that giving money to Nealy was as good as giving it to Price.