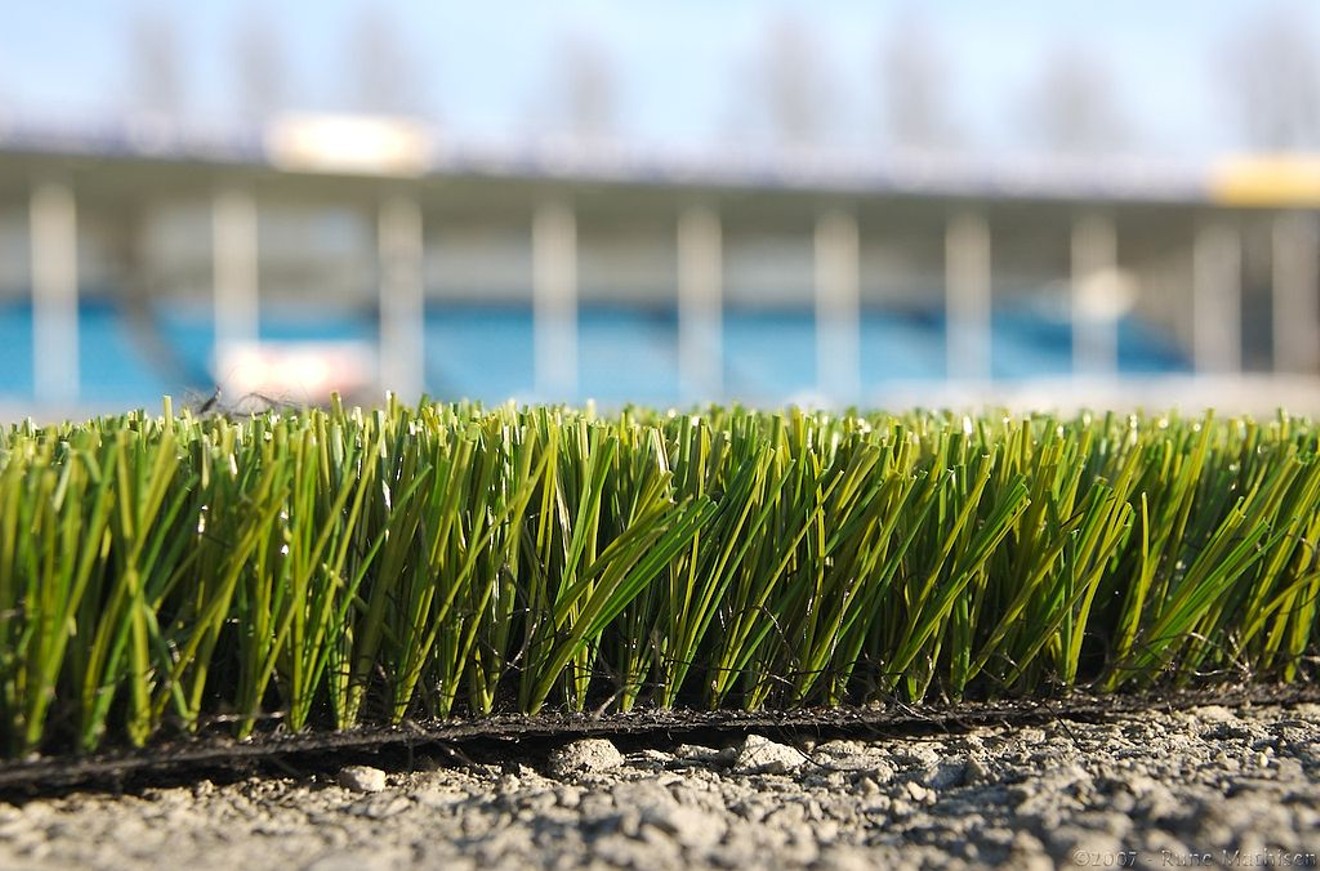 Artificial turf looks sort of real, but it's fake, much like the 'grass-roots' of a pro-police campaign supported by anonymous donors. Rune Mathisen from Skien, Norway, CC BY-SA 2.0, via Wikimedia Commons
A shadowy campaign known only as “Keep Dallas Safe” has been playing politics in Dallas for the past half-year. No one knows who funds the organization, a nonprofit group that can conceal its donors thanks to a rule introduced by the Trump administration in 2020. The people who run the day-to-day operations say their wealthy clients don’t want their names revealed.

The group’s donors may be secret, but its stances are clear: City Manager T.C. Broadnax has to go; Mayor Eric Johnson is OK; and a City Council decision to trim the police department’s overtime budget last year is just one more step on Dallas’ road to anarchy, chaos and “Californication.” (They’re also worried about the city’s “Austinization,” which is presumably similar to Californication, but without the beaches.

A little research did turn up some interesting background about the public face of the organization's day-to-day operations, a man named Daniel Taylor, who was once implicated in a scheme that involved paying actors to attend public meetings in New Orleans, a practice of faking grass-roots support for a political position, a practice known as astroturfing.

Several articles published in 2018 and 2019 on NOLA.com detail how an energy company, Entergy New Orleans, paid at least $55,000 to a Los Angeles based company called Crowds on Demand to hire actors to fill a public meeting to pressure the New Orleans City Council to approve a power plant. While astroturfing isn’t illegal, it’s not honest.

“It was very shady, very secretive, especially when we got paid,” said one of the actors quoted in the article. “They literally paid us under the table.”

Taylor was identified alongside Garrett Wilkerson, a longtime friend of Taylor’s and the former Creative Director of Goodboy Public Relations.

The company was mentioned in a 2018 episode of Tonight with John Oliver. It also is implicated in an alleged extortion scheme in an ongoing federal lawsuit announced in 2018.

Taylor confirmed to the Observer that he and Wilkerson had previously worked for Crowds on Demand but said that Wilkerson had left the firm a few months ago. Taylor said Wilkerson had provided “support” on the Keep Dallas Safe campaign, though he didn't handle the day-to-day operations.

Taylor said he created Good Boy Public Relations to get away from the tactics used by Crowds on Demand, but he refused to comment further on the work he did there for Entergy New Orleans.

Taylor also said no paid actors have been involved in the Keep Dallas Safe efforts.

Taylor and Wilkerson were named as Crowds on Demand staffers who were responsible for recruiting actors for the scheme in New Orleans. Some of the advertisements they used to recruit actors are still visible, such as one on Backstage.com, where Daniel Taylor is listed as the operations director for Crowds on Demand.

This is the same Taylor now at Keep Dallas Safe, a man who has written on behalf of Keep Dallas Safe for right-wing website Texas Scorecard and who spoke at a “We Are The Storm” pro-Donald Trump rally on Dec. 5 in front of City Hall, according to an article in The Dallas Morning News.

The Observer isn’t the first publication to try to find out who’s behind Keep Dallas Safe.

The Observer isn’t the first publication to try to find out who’s behind Keep Dallas Safe. D Magazine Editor Tim Rogers took a stab at it in November after the group mailed a flyer accusing the 11 council members who voted in favor of trimming $7 million from the police overtime budget. Keep Dallas Safe describes that as “defunding the police,” although the department’s overall budget was in fact increased this year. Rogers wrote the mailer was designed by GoodBoy Public Relations, an Arlington based firm run by a husband and wife team, Daniel and Amy Gibson.

Rogers spoke to Daniel, who is in fact Taylor, but misidentified him in his story. Taylor said Rogers simply never asked his name and denied misleading him about his identity. Rogers said he couldn’t recall how he came to the name Daniel Gibson, but said he’s written about many couples with different last names and assumes that he asked to confirm Daniel’s last name.

In any case, this isn’t the first time that the press has covered a case of mistaken identity related to Taylor. In 2017, Taylor told journalists he was a part of the “Council for Responsible Governance” while actually working on behalf of Crowds on Demand, according to NOLA.com.

Their website has included a number of inspirational quotes, including one from Malcolm X.

Taylor said in a phone interview he did not respond because he was too busy and he manages the daily operations of the campaign.

Taylor defended his caginess, claiming he has received death threats, though he refused a request to provide evidence.

Taylor also would not say who is funding the operation because his clients don't want to become the focus of the campaign.

As a 501c4 nonprofit, Keep Dallas Safe may conceal its donors while engaging in political campaigns to a certain extent, provided such activities are not the organization's primary activity. Yet Keep Dallas Safe regularly engages in explicit, direct attacks on Dallas City Council members who are running for office, sometimes even via distasteful memes on their Twitter account.

At least two complaints were sent to the Texas Election Commission regarding last year’s controversial mailer. Taylor said he was unaware of the complaints and that Keep Dallas Safe has done nothing illegal.
KEEP THE DALLAS OBSERVER FREE... Since we started the Dallas Observer, it has been defined as the free, independent voice of Dallas, and we'd like to keep it that way. With local media under siege, it's more important than ever for us to rally support behind funding our local journalism. You can help by participating in our "I Support" program, allowing us to keep offering readers access to our incisive coverage of local news, food and culture with no paywalls.
Make a one-time donation today for as little as $1.