Marlin Landscaping Systems has filed to rezone its property so it can keep storing materials that neighboring businesses say have caused a nuisance in the area. Jacob Vaughn
Sandra Anchondo Hansen studied accounting in school. She became an attorney and a small business owner, but she says she goes home every day feeling like a landscaper.

At the end of the day, Hansen and the workers at her auto repair shop, Motorwerkz of Dallas, often go home covered in dirt, sand, gravel, mulch and other building materials that have blown into the shop.

On windier days, they find the material stuck between their teeth and a stench of manure fills the air. Sometimes the smell gets so bad, Hansen and the employees close down their shop, she says. This has become a nuisance for Motorwerkz and other businesses in the area.

If she wasn't suffering loss, Hansen says she would not be complaining. But, the stench has driven away her customers, whose cars would often be covered in dust after a day at Motorwerkz.

Hansen says it is all coming from her neighbors, Marlin Landscape Systems. She says she’s been in talks with the landscape company since December about containing the materials stored on their property. She's complained to the city, which is responsible for enforcing zoning rules. He first complaint came in June, but so far she's seen little help. Getting the city to handle her complaint is like navigating through a maze, she says.

“If you don’t ask the right person, you get the runaround,” Hansen says.

From mid-June to mid-July, the landscape company was issued three notices of violation and two citations.

On June 18, the city issued Marlin Landscape a violation notice for operating a commercial landscape business, storage yard and vehicle service center without a valid certificate of occupancy.

Early the next month, the company was issued its second violation notice and told to remove the deposited solid waste from the property, obtain the proper certificate of occupancy and a scrap tire permit.

Two days later, on July 10, the third violation notice was issued. The city demanded the landscapers obtain a special use permit or variance for a contractor’s maintenance yard.

Marlin Landscape was given its first citation for alleged illegal land use on July 13. According to the city, the company was ordered to “remove the piles of manure, mulch and dirt from the property within 48 hours because it is considered a life hazard.” 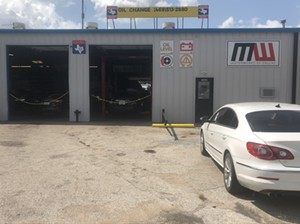 Sandra Anchondo Hansen, the owner of Motorwerkz, plans on closing her current location and setting up shop just a little farther down Harry Hines, away from Marlin Landscape.
Jacob Vaughn

Since moving into this location, Hansen says she’s been prescribed an inhaler because the material makes it difficult for her and her employees to breathe.

Instead of removing the material, Marlin Landscape covered it with a tarp and, on July 15, were issued another citation.

“They keep getting cited and they’re just blowing the city off,” Hansen says.

On July 22, a representative with Marlin Landscape filed for a special use permit for a contractors’ maintenance Yard, so they can keep doing what they’re doing.

That night, around 11 p.m., Hansen sent an email to the city pleading with them to deny the zoning change. "If you proceed to allow this zoning change request to proceed, you will be condemning my land use at 7307 Hines Pl, Dallas, Texas and you will be killing my small, minority-owned business," Hansen wrote in her email.

The email was sent to council members Adam Medrano of District 2 where Motorwerkz and Marlin Landscape sit, and Omar Narvaez, the chair of the environment and sustainability committee. Hansen never heard back from either of them. Multiple attempts were made to reach Medrano and Narvaez for comment, but they did not respond.

Evelyn Mayo, the chair of the board of Downwinders at Risk, a local grassroots environmental group, published a report called “In Plain Sight,” covering industrial compliance issues in Southern Dallas. The report included a case study of shingle mountain, a 60,000-100,000 ton pile of discarded shingles in southern Dallas.

The information in the report is meant to help identify and prevent the next shingle mountain or other poor  code enoforcement. The report says that the permitting process through the city, its planning commission and council are the main vehicles for public involvement in the creation or perpetuation of industrial sites in communities.

"However, in cases like shingle mountain, the public was denied that right for the first year of operation because no appropriate permits were sought," the report said.

Similar to Marlin Landscape, the company responsible for shingle mountain didn't seek the appropriate permits until after violations were discovered, despite cries from residents to their various city representatives and staffers.

Mayo says the biggest obstacle in fixing code or zoning issues is finding the political will from city officials to make a change, which there seems to be none of in Hansen's case.

Mulch, sand and other material piles up on Marlin Landscape System's property behind Motorwerkz of Dallas.
Jacob Vaughn
No one from Marlin Landscape responded to request for comment either.

The company sits on the list of the city's hundreds of active contractors. It focuses on landscape design, outdoor living, stonework and masonry, pools and water features and garden management, according to its website.

Origin Bank is a partner of Marlin Landscape. In 2018, the bank published the story of its relationship with the landscape company on its website. Marlin Landscape owners Chris Bordano and Chase Schavrda were looking to grow their company when they began talks with Origin.

“Warrie immediately stepped in and had everything done in 30 days,” Bordano said, according to Origin’s website. “We had a line of credit, a real estate term loan and a full treasury-management suite.”

The area of Dallas where Motorwerkz and Marlin sit is full of small, minority-owned businesses, Hansen says. These business owners, many of whom don’t speak English, she says, are treated like they don’t have a say.

“I just feel irate that these Highland Park ex-football players who own this company think it’s OK for them to clean up Highland Park and dump all this crap on Harry Hines,” Hansen says.

For a short period of time, it seemed that Marlin Landscape was trying to better contain the material, running sprinklers on their property and covering it up with a tarp. Recently, however, Hansen says the landscape company has gone about their business. She says it seems as if Marlin Landscape has been guaranteed its special use permit will be approved.

The earliest Marlin Landscape could see its zoning hearing is Nov. 5, according to the city's sustainable development and construction office.


Manual Berdeja, who operates The Original Dent Solutions next door to Motorwerkz, says he began to notice the stench and building material in the air this year. He says they often have to do extra detailing on cars because otherwise it would be returned to its owner covered in dust.

Another neighboring business owner says Marlin Landscape's representatives have been receptive to their inquiries about the material, but Hansen's complaints are not unwarranted.

As for Motorwerkz, Hansen says, “My business is pretty much done for.” She plans on closing her current location and setting up shop just a little farther down Harry Hines.
KEEP THE DALLAS OBSERVER FREE... Since we started the Dallas Observer, it has been defined as the free, independent voice of Dallas, and we'd like to keep it that way. With local media under siege, it's more important than ever for us to rally support behind funding our local journalism. You can help by participating in our "I Support" program, allowing us to keep offering readers access to our incisive coverage of local news, food and culture with no paywalls.
Make a one-time donation today for as little as $1.