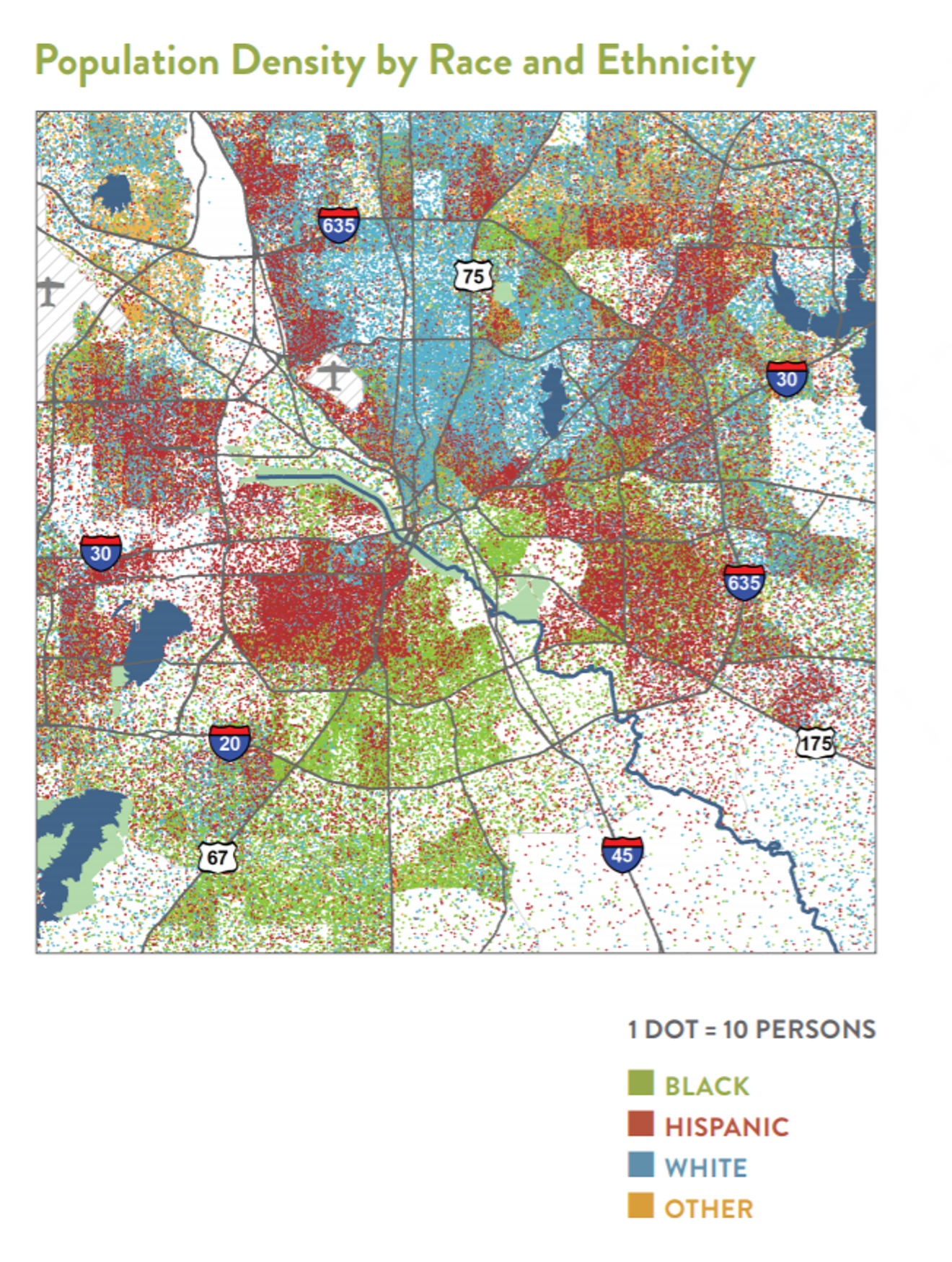 Dallas County population by race Center for Public Policy Priorities
Dallas County's black and Hispanic residents face wide gaps in income levels, educational achievement and access to health insurance despite rapid population growth, according to a comprehensive new study from the Communities Foundation of Texas and the Center for Public Policy Priorities.

The study, released at a Tuesday morning press conference featuring Dallas Mayor Mike Rawlings and Dallas County Judge Clay Jenkins, paints a stark picture of the challenges that face Dallas County despite the much-touted economic growth of North Texas as a region.

According to the Center for Public Policy Priorities' research, Dallas County's population will increase from about 2.5 million to about 3.3 million over the next 35 years. At the end of that period, thanks in large part to tremendous growth in the county's Hispanic population, researchers estimate only 12 percent of Dallas County residents will be white, with blacks and Hispanics making up 80 percent of Dallas County residents. This change can already be seen in the county's child population, which is 53 percent Hispanic, 22 percent black and 17 percent white.

Those kids of color, according to the study, are growing up in a county that is still intensely segregated. 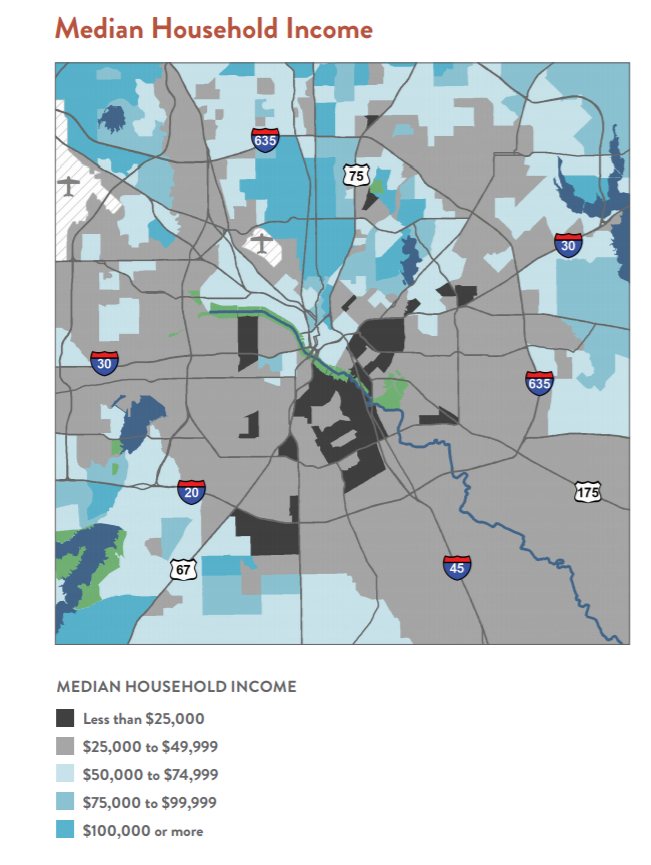 In a series of maps, the Center for Public Policy Priorities shows that income levels in Dallas County communities mirror the ethnic makeup of those communities. Areas with higher concentrations of black and Hispanic residents, like South Dallas and Pleasant Grove, have significantly lower income levels than areas populated by white residents, like East Dallas and the Park Cities.

Dallas County college degree density.
Center for Public Policy Priorities
The average black worker in Dallas makes 54 cents for every dollar a white worker makes, according to the study. The average Hispanic worker makes just a bit more — 58 cents for every dollar made by a white person. Overall, inflation-adjusted median income in the county dipped almost $10,000 from 1999 to 2015, according to the study.

Education levels in the county match the pattern established by race and income level. Residents of areas with high nonwhite populations are much less likely to have college degrees than residents of areas with high proportions of white residents. White residents of Dallas County are 5.2 times more likely to have a bachelor's degree than Hispanic residents and 2.4 times more likely to have one than black residents. [image-4]
Gaps between white and nonwhite residents persist in areas like health insurance coverage and average work commute times as well. The uninsured rate for Hispanics in Dallas County is 3.5 times that of white residents, according to the study, while blacks are twice as likely not to have insurance as whites. Some commuters in South Dallas face one-way average commutes of more than 35 minutes a day, while average commutes to work from the Park Cities are uniformly less than 20 minutes.

"I think it's important to understand what institutional racism is," Rawlings said at a press conference announcing the study. "You're going to see [in the report] that it's a major barrier."

Fixing the gap in education between white kids and nonwhite kids is essential, the mayor said.

"[High paying] jobs are here," he said. "There's a gap between the young people who can fill the jobs and those who can't."

Despite some of the reports negative findings, Rawlings still believes Dallas is capable of giving all of its residents chances to succeed moving forward, he said.

"We can get down on ourselves or we can understand that Dallas is a city of opportunity," he said.