Dallas Had the Worst Big City Mayoral Election Turnout in the U.S. in 2015

Dallas’ voting deserts and oases. Portland State University
We knew Dallas municipal election turnout was bad. Now we know it’s among the worst in the country.

A comprehensive new study from Portland State University in Oregon reveals that Dallas’ 6 percent turnout for the 2015 mayoral election between incumbent Mike Rawlings and Dallas attorney Marcos Ronquillo was the worst among the United States’ 30 biggest cities. Furthermore, Dallas’ votes in the election were highly concentrated both by age and geography, giving Dallas’ oldest residents disproportionate influence in city elections, according to the study.

If one paid any attention to the 2015 election, the Portland State researchers’ findings shouldn’t come as a surprise. Despite six of Dallas’ City Council members being unable to run for reelection because of term limits, and the ongoing re-litigation of one of Dallas’ galvanizing political issues — the battle over the plan to put a toll road between the Trinity River levees — almost no one could be bothered to turn out in many of Dallas’ council districts.

The voting age population of each Dallas City Council district hovers somewhere between 50,000 and 90,000 residents depending on how the city’s previous round of redistricting went. Despite those numbers, three council districts — Districts 2, 5 and 6 — saw fewer than 1,500 voters show up at the polls in 2015. Monica Alonzo, Dallas’ mayor pro-tem and District 6 council rep, racked up a nearly 70 point win despite receiving only 958 votes. At the time, Dallas County elections administrator Toni Pippins-Poole blamed the low turnout on voters’ unfamiliarity with many of the 44 people running in the city’s contested 2015 races.

“There’s a lot of candidates on the ballot, and there’s not a lot of name recognition,” Pippins-Poole said. “When you want to get somebody out to vote, to pique their interest, there has to be something there emotionally for them.”

Voter apathy of the type that’s permeated Dallas recent elections leads to some voters wielding disproportionate influence. In 2015, the median age of voters in the Dallas election was 62. The median age of Dallas’ overall adult population was 41. Breaking things down further, 17.7 percent of Dallasites over 65 cast ballots in the mayoral election. Among 18- to 34-year-olds, turnout was 1.7 percent. Dallas’ senior voters, in other words, had 22 times more impact on the election than its 18- to 34-year-olds, according to the study.

Portland State University
Turnout in Dallas was also heavily dependent on geography in 2015. Clusters of areas that Portland State researchers call voting oases — places where voters vote at twice the city-wide rate — dot North Dallas as well as southern Dallas’ black-represented districts — all of which got new representation in 2015. Portions of East Dallas, which saw a highly competitive race between Mark Clayton, Darren Boruff and others in District 9, also qualified as an oasis. Those who live in these voting oases therefore also have enjoyed a disproportionate influence on the city’s political trajectory.

The turnout picture is far less rosy in Dallas’ heavily Hispanic areas, like West Dallas and Pleasant Grove, both of which are classified as voting deserts by the study. That designation is reserved for neighborhoods with turnouts of 3 percent or lower. 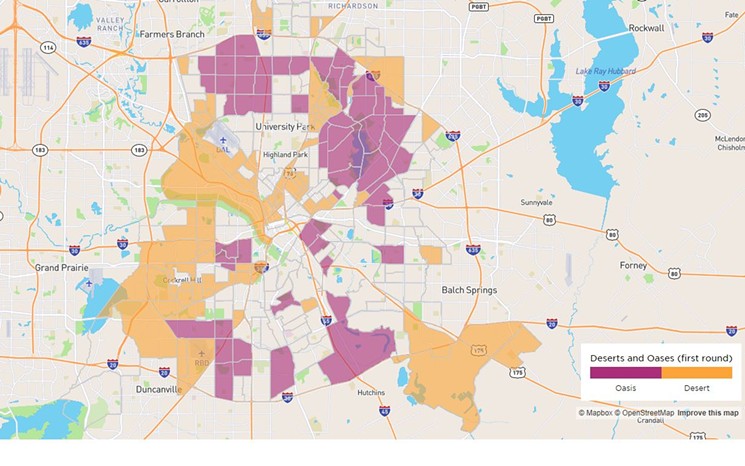 Dallas’ voting deserts and oases.
Portland State University
Dallas’ abysmal turnout puts it in good company among Texas’ big cities. Fort Worth joins Dallas at the bottom of the list with 6 percent turnout in its last contested mayoral election in 2011. Austin, El Paso and San Antonio all check in between 11 and 13 percent and Houston leads Texas cities on the list at 18 percent. Portland, for the record, tops the list with a whopping 59 percent turnout in its last mayoral election.