#Snowpocalypse 2018 Is Inevitable, So Here's Some Advice from the Experts

Beware the Dallas driver in the snow. Joe Mabel/Wikimedia Commons
While The Dallas Morning News and the rest of the lamestream media might be playing it down, saying that Dallas has just a "chance" of snow Thursday and Friday and that any accumulation of ice and snow will be "light, if any," the Observer is here to tell you the real truth: It's going to be a frozen hell out there, beginning tonight and continuing through at least Festivus.

Just look at this map of the potential storm from the National Weather Service, trying to lull us into a false sense of security: 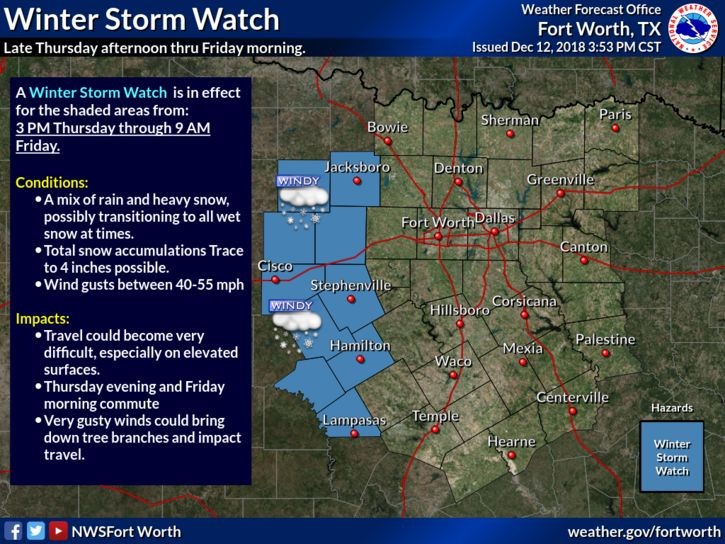 See, the storm has us right where it wants us.
National Weather Service

Even if the storm doesn't dump a foot-and-a-half of snow on Dallas proper, and it's going to, even the smallest amount of wintry mix will make Dallas roads all but impassible, as anyone who's lived in the city for any amount of time can tell you.

The best course of action during a nightmarish winter storm like the one we're facing is to stay in, playing Red Dead Redemption 2 and imbibing the highest ABV beverage you've got in your liquor cabinet. Just in case you have to get out — maybe you have a boss who, horror of horrors, expects you to actually work in the office — the Observer figured it would do you a solid. Ahead of Snowmageddon 2018, we consulted with the experts at the Minnesota State Patrol on how one should drive in the cold stuff, should he or she make the foolhardy decision to do so, which he or she definitely should not.

"I think [difficulty driving in winter weather] is across the board," MSP Lt. Gordon Shanks says. "I don't think Minnesotans are necessarily better at it. People need to increase their following distance. We have the same issues up here. We have people that crash, and they end up in the ditch because they're driving too fast for the weather and they're following too closely."

Drivers who have to get out in the snow or ice should stay far back from the traffic ahead of them, Shanks says, so they can avoid other vehicles that might end up sliding on slick roads. It doesn't hurt to bring provisions in case the worst happens either, he says.

"Plan ahead, set your alarm a little bit earlier and make sure you have a winter weather survival kit. We have those up here — you can have batteries, a flashlight and maybe some snacks in there. I don't want to speak for the troopers in Texas — we try to get to calls as soon as we can up here — but it's good to have that kit because ... it may take a little time," Shanks says.


"That's why I try to get the message out that, as experienced as you may be, if you're driving too fast on a layer of mist that freezes, you're going to end up in the ditch." — Gordon Shanks

In case you're missing our subtle point here — and we're looking at you, relocated snowbirds — this officer is from Minnesota's highway patrol, and he says even drivers up there have trouble on snow and ice. So don't get all superior and say stuff like, "I was raised in Alberta. These Texans just don't know how to drive in winter. I do."

We're almost positive there's a Texas law that says natives are allowed to biff you in the face with a slushball if you say something like that. If not, there should be.

Even if you happen to be one of the fearless Yankee Nanooks slumming among Texans, Shanks says you shouldn't be overconfident driving in wintry conditions.

"We're not immune to it. Across the United States, especially in Minnesota, we do have drivers that drive faster than they should in the weather, and that's why I try to get the message out that, as experienced as you may be, if you're driving too fast on a layer of mist that freezes, you're going to end up in the ditch," Shanks says.

The Minnesota State Patrol shared this handy video with us to help you keep safe as Jack Frost passes on nipping Texans' toes and goes straight for the gonads. (One point that applies well in Texas: Four-wheel drive is not magical. You can slide on four wheels as easily as two in your big, honkin' pickup.)