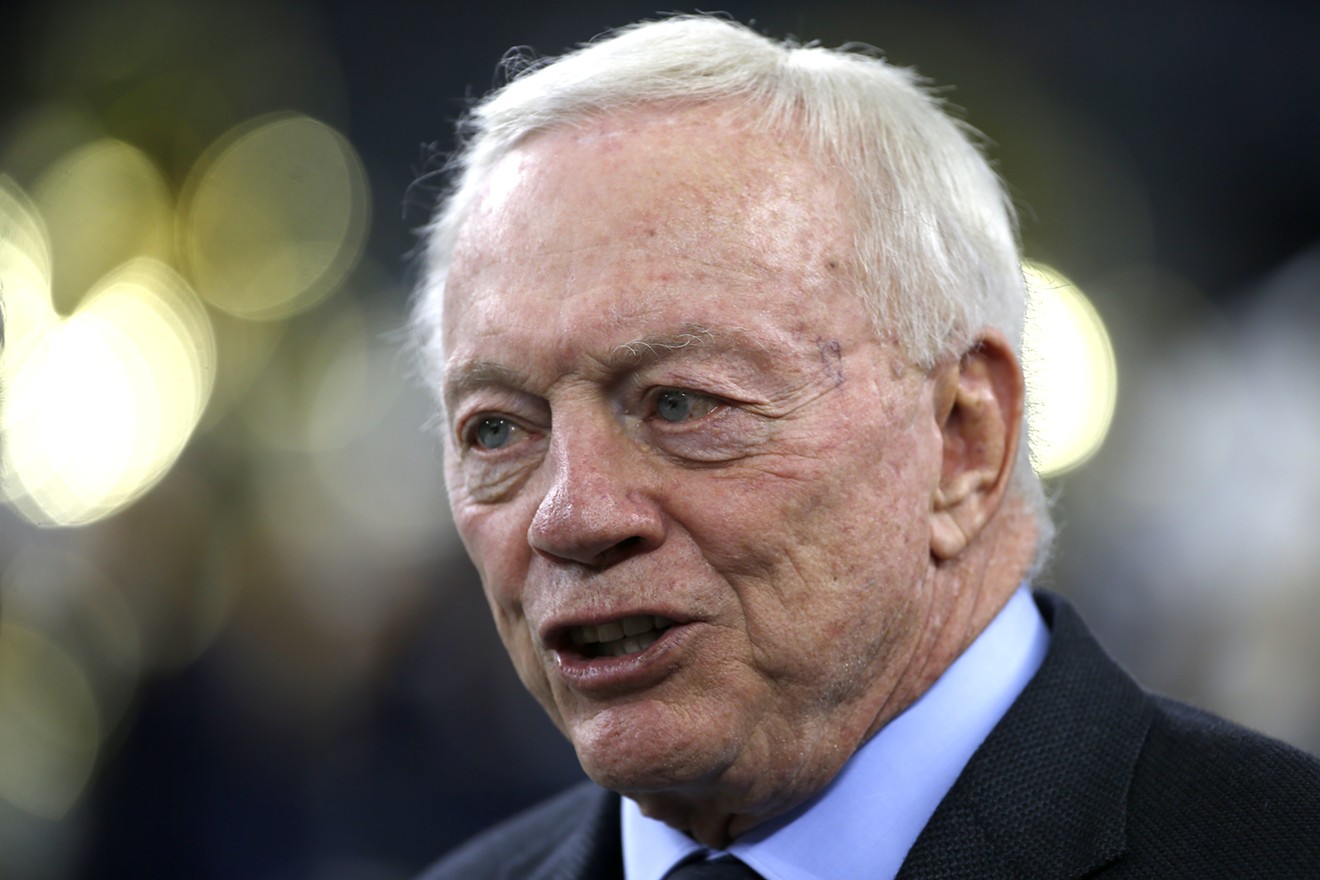 Cowboys owner Jerry Jones has to be breathing easier after the downfall of some of his most gleeful tormentors. Ron Jenkins / Getty
It's been about a week and a half since Deadspin, the sports-adjacent piece of what used to be Gawker's media empire, died. Deadspin.com, the website, still exists, and some Vichy-ass version of the blog is sure to take its place, but Deadspin, which had become the daily go-to for internet denizens who were fans of sports, taking on sacred cows, or just generally good writing, bit the dust as October turned to November, when its entire editorial staff walked out over two days.

The staff quit because their new corporate overlords wanted a site that had never really been about sports to "stick to sports," because the bosses felt it would make Deadspin, already a hugely successful site, more attractive to advertisers.

While there are thousands of words that could be written — and have already been written — about the blog's rapid downfall, we thought we'd mourn the loss of one of the most interesting places on the internet by celebrating some of the hundreds of things Deadspin published about Dallas.

From Diana Moskovitz on the inevitability of the fallout that came from the NFL's decision to suspend Ezekiel Elliott for six games in 2017.

"No matter what the NFL does, it devolves into a bunch of dudes arguing about whether or not a woman is a liar. It happened with Janay Rice. It happened with Nicole Holder. It happened with Molly Brown. And it’s happening now. The best case for the NFL just packing up and admitting, 'We have no clue what to do about domestic violence and we’re probably making it worse' is today. Because not only is the entire Ezekiel Elliott case devolving into a slut-shaming shit show, but it’s a shit show the NFL set itself up for. NFL brass made this happen, and are so stupid they don’t even realize it."

2. "22 Years Ago Today, Nolan Ryan Beat The Shit Out Of Robin Ventura"

From Barry Petchesky on every Rangers fans' not-so-guilty pleasure.

"Ventura’s errors were manifold. Rather than barrel into Ryan at full speed, he slowed down when he hit the mound, allowing Ryan to remove his glove. Ventura went low on Ryan, trying to wrap up his trunk, but couldn’t get any leverage on the big Texan. Ryan wrenched Ventura’s head to the side, as if trying to wrest it off, then deliver five or six short, quick uppercuts to Ventura’s dome before the cavalry could arrive."

3. "A Photo Of Dirk Nowitzki Astride Mark Cuban, Both Men Enjoying Themselves Immensely"

After the former New Jersey governor embarrassed himself and Cowboys fans everywhere cavorting with Jerry Jones in the latter's luxury box during a January 2015 playoff game against the Lions, Deadspin turned the footage into an ominous-sounding attack ad.

"Although we can't say for sure that he's inebriated, this footage is full of drunk guy characteristics: the awkward head nodding followed by a slow fall-into-lean against the wall, the precarious clutch of a Bud Light bottle, the half-hearted and contorted hand thrusts to the beat of 'Gangnam Style.' The best part, however, is when a couple of girls convince him to bust out some moves, an idea which he quickly abandons in order to go back to being the awkward white guy in the club. Keep on keepin' on, Cubes."


6. "The Story Behind Those Jerry Jones Photos Is Weirder Than The Photos"

Way back in 2014, Cowboys owner Jerry Jones got in a scrape after a man named Frank Hoover published photos on the internet of Jones and several women in what appeared to be a bathroom. The photos were weird, but Hoover's backstory might have been weirder, as Tom Ley wrote.

"You can read Hoover's entire rant, which seems to be addressed directly to Jerry Jones, here; we've also embedded it at the bottom of the page. It's definitely crazy, but there's reason to believe that Hoover's rant contains at least a few slivers of reality. He got his hands on those photos, after all, and someone who knows him tells us that Hoover used to be fairly well connected in the Dallas scene and was always going to parties with Cowboys and Mavericks players. And then one day he woke up and just started believing he was the son of God. It happens."

"If a week passes without the Double J having done or said something completely stupid, he will cry out, 'JEEZUM CROW I HAVEN'T DONE ANYTHING STUPID TODAY!' and go running for the nearest camera. He's fired Jimmy Johnson, hired Barry Switzer, installed cage dancers in his stadium, stretched out his face to look like a villain in a Terry Gilliam movie, tampered with Adrian Peterson, rubbed his crotch on people, employed BOTH Roy Williamses, and in general has done everything possible to run the Cowboys into the ground."

8. "What Happened On The Night Josh Hamilton Had A Relapse, (Alleged) Bathroom Sex? One Eyewitness Account"

Once you read the details of Josh Hamilton and that one night at Sherlock's, you'll never forget them.

"'Basically, there are two games. One is called pink eye. That is when you just fart in somebody's face and they can't flinch. If they move, there is a penalty for it. This all came from Mark Lowe. "Fart Bottle Roulette" is when you get a bunch of little water bottles, fart into one of them, put them in a bag, shuffle it, and then watch everybody's reaction. Everybody opens a bottle one by one and it's the most nerve-wracking thing every because you really don't want that bottle.'"

The highlight of every NFL offseason: Drew Magary going in on the Cowboys.

"Over the course of this century, the Cowboys have always been a team with bad habits that hopes that the rest of the league will accommodate them anyway just because they’re the DALLIS CAGGGHHHBOYS. That chesty ignorance is their brand personality. They LIKE being this stupid. As such, the Cowboys are still considered a showcase NFL franchise despite having had as much success as the Skins and Bills over the last two decades. It’s so perfect that the NFL’s flagship franchise is such a weird and extremely expensive mess. I see nothing in the Cowboys."

Bonus: "Manti Te'o's Dead Girlfriend, The Most Heartbreaking And Inspirational Story Of The College Football Season, Is A Hoax"

This one has nothing to do with Dallas, but it's one of the decade's finest pieces of investigative reporting. The less you know about the story, if you don't know about it already, the better.
KEEP THE DALLAS OBSERVER FREE... Since we started the Dallas Observer, it has been defined as the free, independent voice of Dallas, and we'd like to keep it that way. With local media under siege, it's more important than ever for us to rally support behind funding our local journalism. You can help by participating in our "I Support" program, allowing us to keep offering readers access to our incisive coverage of local news, food and culture with no paywalls.
Make a one-time donation today for as little as $1.