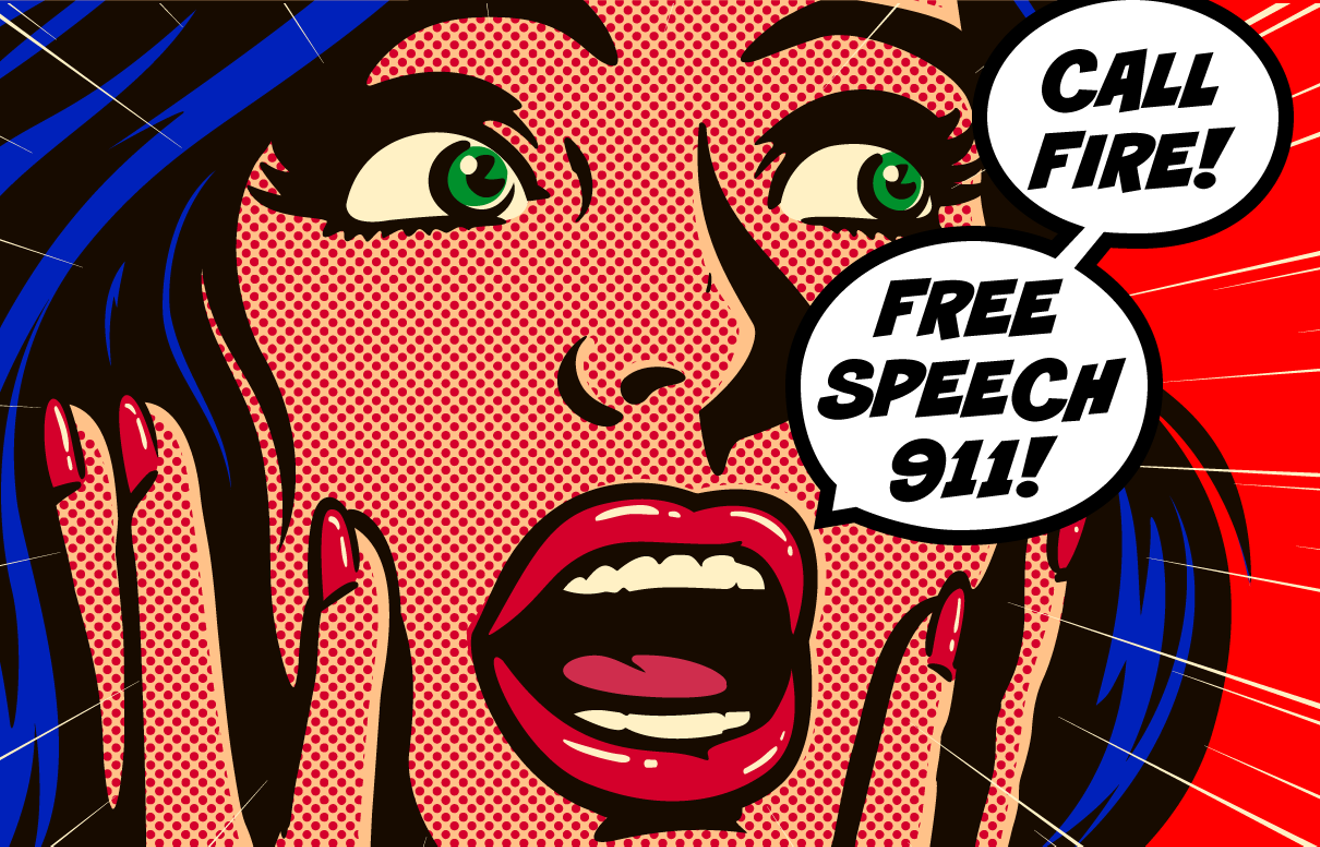 FIRE is standing up for teachers' First Amendment rights. Dallas Observer
While watching the vice presidential debate in 2020, history professor Lora Burnett started to tweet from her living room in conservative Collin County. Then-Vice President Mike Pence wouldn’t stop talking when the female moderator had repeatedly and kindly asked. Burnett, who’d been scrolling through her Twitter feed and reading comments from colleagues and friends, weighed in with a snarky quip.

“The moderator needs to talk over Mike Pence until he shuts his little demon mouth up,” she wrote in an Oct. 7 tweet.

Soon, right-wing websites cited Burnett’s “demon” tweet in articles about professors who dared to criticize the Republican vice president. Then came a wave of responses that demanded Burnett’s ousting. “People were like slobbering, baying dogs trying to get me fired for a comment that I made outside the classroom and on my own time,” she recalled.

The Collin College professor didn’t know it then, but the tweet would place her in her employer’s crosshairs and prompt a GOP state lawmaker to push for her firing. It would also serve as the starting point for a series of legal battles between the community college and one of the country’s foremost free speech advocacy groups: the Foundation for Individual Rights and Expression (FIRE, previously known as the Foundation for Individual Rights in Education).

FIRE is headquartered in Philadelphia and works with those embroiled in free speech controversies nationwide. The nonpartisan, nonprofit group has championed civil rights on campuses regardless of the speaker’s political views, and lately it’s taken up several North Texas-based controversies, including Burnett’s.

Wherever free speech rights are set ablaze, FIRE shows up with the extinguisher.

Shortly after Burnett’s tweet about Pence, Collin College President Neil Matkin violated her civil rights, she said. She was restricted in using her school email and her personal political opinions were publicly denounced in an official college communication. So, some of Burnett’s friends recommended that she get in touch with FIRE. Before she could, FIRE reached out to her.

After months of fighting for her job, though, the historian no longer works at Collin College. The school effectively fired her last year, leading to a FIRE-backed lawsuit. Burnett didn’t get her wish of reinstatement, but thanks to FIRE’s advocacy, the college wound up agreeing to pay her $70,000 plus attorneys’ fees.

Dr. Lora Burnett says she was terminated from Collin College after she criticized then-Vice President Mike Pence on social media.
Photography by FIRE
For nearly two years, FIRE has advocated for Burnett and other Collin College professors who have accused the school of trampling on free speech rights. Some say the administration has prioritized silencing liberal professors over upholding a commitment to academic freedom. Burnett points out that she posted those tweets on a weeknight in her own home and was in no way performing any job duties.

The way Burnett sees it, there’s an “almost hyper-fundamentalist religious insistence that professors … should be as morally upright as Sunday school teachers every time they open their mouths, and that’s just silly.” Even other public sector workers like police officers and firefighters are allowed to express opinions on their own time, something we should all be free to do, she said.

Burnett added that there’s “nothing in the manual” that prepares professors to deal with attacks on their civil rights. She’s thankful that FIRE came to her defense. “They saw something amiss in what was happening to me and immediately stepped in to advocate for me,” Burnett said, “which I will never cease to be grateful for.”

It was Jan. 13, 1993, and a group of Black sorority sisters were talking outside of Jacobowitz’s dorm room window. The Chicago Tribune reported at the time that the University of Pennsylvania student yelled out: “Shut up, you water buffalo!” Israeli-born Jacobowitz claimed that “water buffalo” was the English translation of a Hebrew word for someone who’s behaving boorishly. The university saw it differently and charged him with “racist hate speech,” according to the First Amendment-focused Free Speech Center’s website.

The “water buffalo” incident upset University of Pennsylvania history professor Alan Charles Kors, who argued that the term had no racist ties. Politically conservative Kors rejected the notion of speech codes, and along with liberal-leaning Boston defense attorney Harvey A. Silverglate, authored a 1998 book examining the acceleration of university crackdowns on liberty. The next year, the pair founded FIRE.

Columnists have penned think-pieces about how FIRE has picked up the slack for the American Civil Liberties Union (ACLU) in recent years. National Review noted in June that the ACLU earned its reputation for free speech absolutism thanks to its defense of the rights of extremist groups like the Ku Klux Klan and Nation of Islam. Lately, though, critics have asserted that the ACLU has veered more and more to the left. FIRE, meanwhile, “has demonstrated in both rhetoric and action that it equally and fairly protects the free-speech rights of those with varying political ideologies — unlike the ACLU,” the Review writes.

But some have accused FIRE of harboring a conservative bias, and indeed, it does receive support from conservative and libertarian funders. Left-leaning watchdog Media Matters has flagged FIRE as rubbing elbows with an anti-LGBTQ+ hate group. And some say the organization’s executive leadership has perpetuated the narrative of “cancel culture,” which critics argue is an idea aimed at preventing one’s ability to respond to speech with more speech.

Still, FIRE maintains that it defends the views of all sides.

At the same time that the organization supported a student suspended for holding a legally owned gun in an off-campus Instagram post, it also defended a student who posted sex-positive lyric ideas for a remix of “WAP” by Cardi B and Megan Thee Stallion. 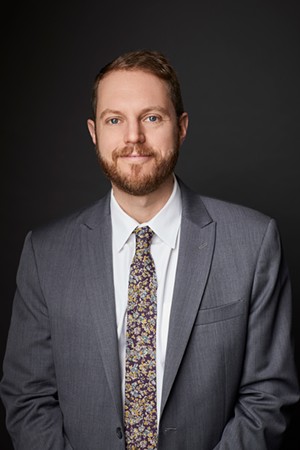 Will Creeley is FIRE's legal director.
courtesy FIRE
FIRE’s legal director, Will Creeley, is the son of a poet and grew up appreciating the power of words. A hip-hop fan, he recalls that 2 Live Crew’s single “Banned in the U.S.A.,” which was a commentary on the rap group’s run-in with obscenity law, made a “pretty powerful” impression on him as a 10-year-old.

Creeley knows that FIRE isn’t always popular. He said he could cite five cases that would make one person think he’s a freedom fighter and another believe he’s the devil incarnate. FIRE would love to put itself out of business, he added, “but unfortunately, business is booming.”

Social media has supercharged the threat to faculty speech, Creeley said. The country is deeply polarized these days, and outspoken professors and students often aren’t granted the grace of having divergent views. But Creeley reasoned that the First Amendment serves as a relief valve for those who are pissed off about the state of the world, and it’s worth protecting. Best to answer speech that you don’t like with more speech, he said.

Collin College is not the only North Texas campus that has attracted FIRE's attention.

Earlier this summer, the University of Texas at Dallas announced it was investigating complaints that an educator had posted homophobic tweets. Timothy P. Farage, a professor in the computer science department, tweeted about wanting to “find a cure for homosexuality” amid a surge in cases of monkeypox, a virus that anyone can catch but which is primarily spreading among men who have sex with men. Before long, students petitioned the school for Farage’s firing. FIRE called on the college to end its investigation.

The nonprofit has also stood up to Tarleton State University in Stephenville after the administration allegedly attempted to squelch student press freedoms.

FIRE officially broadened its mission in June when it changed its name and declared it would also fight off-campus censorship. The organization announced a $75 million expansion initiative centered on research, litigation and public education. The move comes amid a national push to pull controversial library books from shelves, especially those about race, sexuality and gender identity.

Although it’s received criticism, FIRE has earned itself a sterling reputation over time in the eyes of many. The American Association of University Professors (AAUP) has a censure list, said Jeff Blodgett, president of the Texas Conference of the AAUP. But that’s his organization's “main weapon,” whereas FIRE enjoys a robust legal department and substantial financial support to help fund lawsuits.

Blodgett notes that in the Lone Star State, the AAUP views FIRE favorably; the two groups even collaborated on the Collin College case, he said. The left is often accused of stifling dissenting views, but it’s something that the right is also guilty of. “Free speech is under attack like it never has been before,” Blodgett said. “So it's a tough time to be an outspoken professor.”
click to enlarge Former Collin College history professor Michael Phillips knows what it’s like to be the target of school administrators. He claims that he was terminated earlier this year partly because he’d criticized the school’s response to the COVID-19 pandemic. He said that when he first encountered free speech trouble, he repeatedly tried to contact the ACLU’s Dallas office and never heard back, but that FIRE was ready to help early on.

Phillips sued the school this past spring in one of FIRE’s three recent Collin College lawsuits. Former education professor Suzanne Jones has also sued for reinstatement and praises FIRE as being a “great support to the faculty who were wrongly terminated at Collin.”

Certain teachers have to deal with controversial subject matter, Phillips said, and some discussions could be potentially career-ending.

Phillips lauds FIRE as an “absolute [stalwart],” adding that he’s proud of the work that it does. “I think they're essential,” he continued. “I think a lot of people would be without a voice in academia, and I know I could not have carried on this fight that I'm carrying on without their support.”
KEEP THE DALLAS OBSERVER FREE... Since we started the Dallas Observer, it has been defined as the free, independent voice of Dallas, and we'd like to keep it that way. With local media under siege, it's more important than ever for us to rally support behind funding our local journalism. You can help by participating in our "I Support" program, allowing us to keep offering readers access to our incisive coverage of local news, food and culture with no paywalls.
Make a one-time donation today for as little as $1.