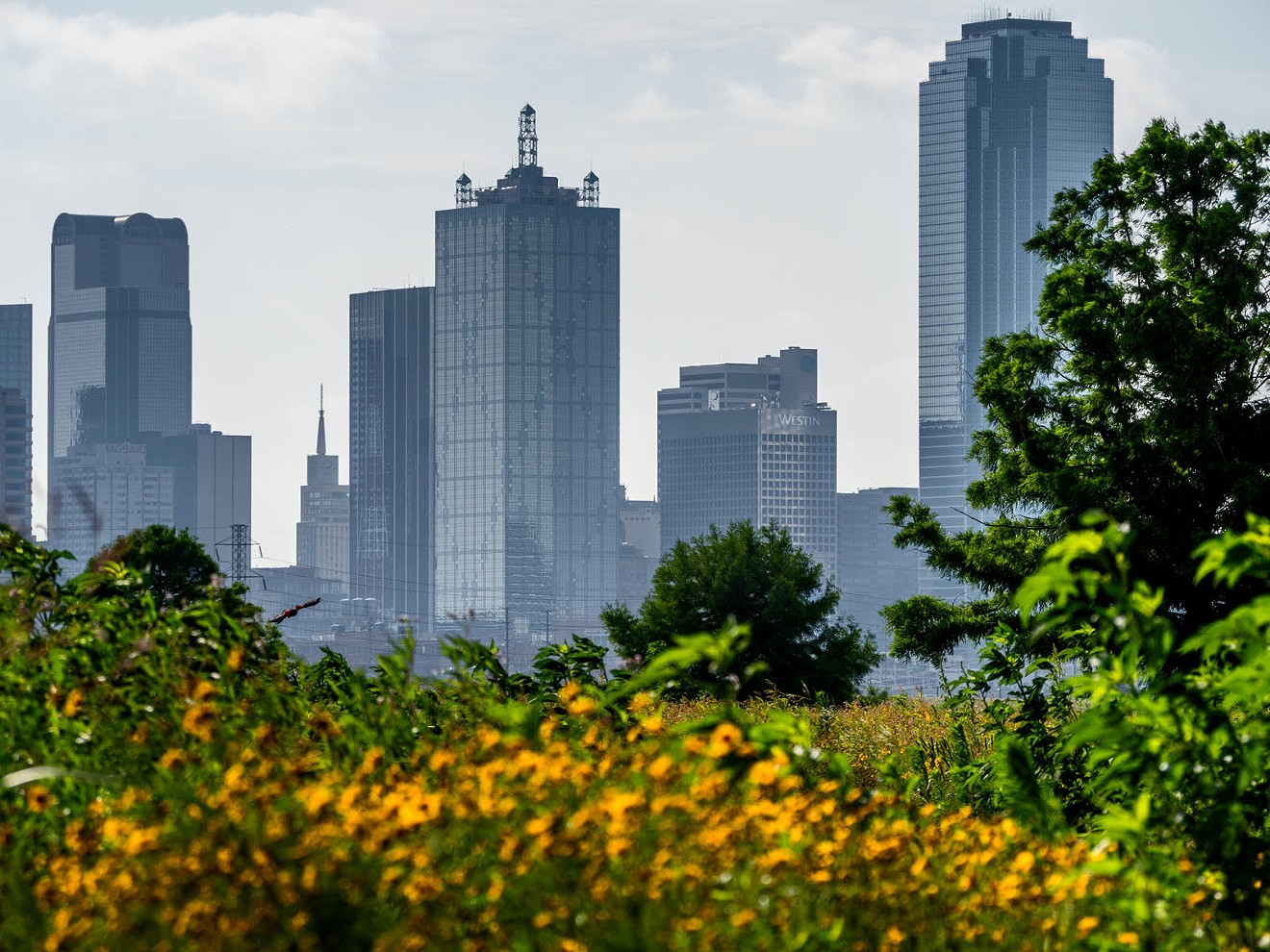 The development will raze 115 multiple family units and replace them with 315 rental multi-family units, including a number of affordable apartments. The project, however, will ultimately lead to a net loss of affordable housing. Scot Miller
Brittany King has lived in the Turtle Creek Terrace Condominiums in Oak Lawn for the last eight years. Having lost her vision as a teenager, she is legally blind. Her condo gives her the accessibility she needs to maintain independent living.

“The Upcreek and Oak Lawn areas are one of the few parts of Dallas that have the ability to accommodate the needs of people with disabilities like myself through the vital and direct access to public transportation, grocery stores and essential services,” King told the City Council last Wednesday.

For about the last five years, King has been fighting to maintain her way of life, threatened by a development that was up for a final City Council vote this week. Lincoln Property Co. has wanted to upzone the land so they could build taller structures, increase density and get more bang for their buck for a multi-family development. The development has been dubbed the Lincoln Katy Trail project.

“My purpose today is to provide a voice for the members and renters of the HOA who have been woefully ignored throughout the entire process of the Lincoln Katy [Trail] project,” King told the council before their vote.

The development would raze 115 multiple family units and replace them with 315 rental multi-family units, including a number of affordable apartments. The project, however, would ultimately lead to a net loss of affordable housing.

King said the development would forcefully remove her and others from their home, leaving them with no affordable options.

“I will have nowhere to go,” she said. “As of now, I am a disabled individual with a job, contributing to the Dallas local economy. I can provide for myself because of my current living arrangement. I ask that the council members who claim to champion the fight for affordable housing and care for the rights of people with disabilities to consider my situation, for I am not alone.”

Hundreds of official ballots were cast against the project. Additionally, seven HOAs, a nearby senior living center and the Dallas Homeowners League opposed the development. The Oak Lawn Committee, which helps guide development in the area, voted it down on three occasions. Both the Dallas Plan Commission and the City Council previously opposed it as well.

“I will have nowhere to go.” – Brittany King, Turtle Creek Terrace Resident

Before moving to Turtle Creek Terrace, King lived along Northwest Highway. She said there is no accessibility for people with disability in that area. There are no sidewalks along the highway, for example.

"I found myself at times trying to get to the grocery store walking in the highway," King told the Observer. "It was a very dangerous situation, so when the opportunity presented itself, this condo, my parents bought it so that I could have a place that I could live independently."

Her home is close to public transit, the grocery store and the dry cleaners where she works. She's also not too far from several acting theaters in the area, which is important because she also does costume design work and hopes to one day become an actor.

The last time the Lincoln Katy Trail project was up for a vote, King and her living situation at least got a couple of mentions.

Philip Kingston, the former city council member over District 14, brought up King as one of the reasons for opposing the project. Then-mayor Mike Rawlings asked Kingston if he’d support the project if Lincoln bought an apartment for King.

Ultimately, the project failed to pass at the time, leaving Lincoln to wait for another batch of City Council members and City Plan Commissioners and seek their approval. The company refiled the case last year.

Amanda Popken, an economic development specialist, was hired to help the community communicate their desires with the representative for the developer. Some in the community worry about density, traffic, the height of the development and destruction of certain sensitive ecological areas.

Lincoln brought the plans for the latest iteration of the project (which isn’t much different from the original) to the Oak Lawn Committee a couple of times, but Popken said it became clear they were going to push hard on doing whatever they wanted.

Besides a contentious email, Popken said, they never got much of a response from Lincoln Property. “It reemphasized that they were not interested in having a civil relationship with the community,” she said.

Despite this, David Blewett, City Council member for District 14, and City Plan Commissioner Wayne Garcia encouraged them to keep working toward a compromise. Popken said Garcia recommended putting together a list of specific things the community wants the developer to change.

They had to hire Richard Brown, a former senior planner for the city, to help them make their requests for the development.

But after they put together their requests, they were told the developers had no intention of making changes and they were bringing it to the plan commission on Feb. 4 as is.

They took the project back to the City Plan Commission where it was approved, despite the overwhelming opposition.

King was one of 24 people signed up to speak on the project when it was brought back to City Council April 28. Even though King shared with the council her situation and how she would be negatively affected if the project was approved, not one member mentioned her.

Blewett boasted about his engagement with the community on this project. He said he walked the neighborhood to hear what residents had to say about it. Unfortunately, King wasn't in town.

However, Blewett said that every resident he spoke to that day wanted to sell the property. Blewett told the council he supported the project because of Lincoln's reputation, adding that it would provide affordable housing and more entry points to the Katy Trail.

Most of the council supported the project, applauding Blewett for his work on it.

King wasn’t surprised that Blewett moved to approve the development. What did surprise her was all the praise Blewett received from his colleagues on the council.

The only two who voted against it were Adam Bazaldua of District 7, and Omar Narvaez from District 6.

Bazaldua opposed the project because it goes against the city’s affordable housing goals. “We can have policy on a piece of paper and we can either adhere to it or not,” Bazaldua said, referring to the city’s comprehensive housing policy. “If we choose not to, and allow for the developers to dictate what affordable housing looks like in our city, then we will continue down the same path that we’re in.”

Council member Chad West in District 1 showed some resistance to the project for the same reason. If denying the project meant permanently preserving the existing affordable homes, he said he would vote no. “The rapid loss of affordable for-sale homes is a major problem in the city right now,” West said. “But denying this case is not going to stop the affordability from going away.”

If the project didn’t get approved, another developer would likely build homes on the land at market rate. “In summary, if we deny this case today, the alternative is almost surely going to be market rate with zero affordability,” West said. For this reason, he voted in support of the project.

Narvaez voted no because the development would destroy 100 matured trees. “We just can’t afford to lose this many trees in one swoop,” Narvaez said. The lack of affordable housing also swayed him. “It just comes up too short for me,” he said.

I don’t have any interest in shoving out somebody else from their home because I’ve been shoved out of mine.” – Brittany King, Turtle Creek Terrace Resident

For decades, the Plan Commission has relied on the due diligence done by the Oak Lawn Committee to determine whether different developments are appropriate. However, Lincoln was able to bypass the committee this time around. Now, people in the community worry this will set a precedent for developers to do the same thing in the future.

“Whatever is happening to us is going to happen to our neighboring HOAs,” King said. “I do foresee and predict that happening until this entire area is just going to be one giant Lincoln property.”

This case could change the process of development in Oak Lawn. The landscape may end up looking a little different. But it will most certainly upend Brittany King’s way of life.

King isn't entirely sure what the future looks like for her. She said Lincoln hasn't given her family a straight answer as to the cost of the new units. However, she expects it to be somewhere in the range of $1,600, a sum she can't afford. She's looking into other units in the area, but said most of the HOA fees she'd have to pay would make the cost of living too expensive.

“Sure we can buy the unit, but the HOA fees for other buildings in this area are astronomical,” King said. The fees can cost up to $900. Still, she doesn't feel comfortable with the idea of moving out of District 14.

“I feel like me moving away from District 14 and going to another district that has new development, I’m just shoving out whoever’s currently living in that district. That’s what a move like that would feel like to me," King said.

While she's in a tight spot, she said she's thankful to have her family for support, a luxury that some of the Turtle Creek Terrace residents don't have. On what she will do next, King laughs and says, "I'll jump off that bridge when I get there."
KEEP THE DALLAS OBSERVER FREE... Since we started the Dallas Observer, it has been defined as the free, independent voice of Dallas, and we'd like to keep it that way. With local media under siege, it's more important than ever for us to rally support behind funding our local journalism. You can help by participating in our "I Support" program, allowing us to keep offering readers access to our incisive coverage of local news, food and culture with no paywalls.
Make a one-time donation today for as little as $1.