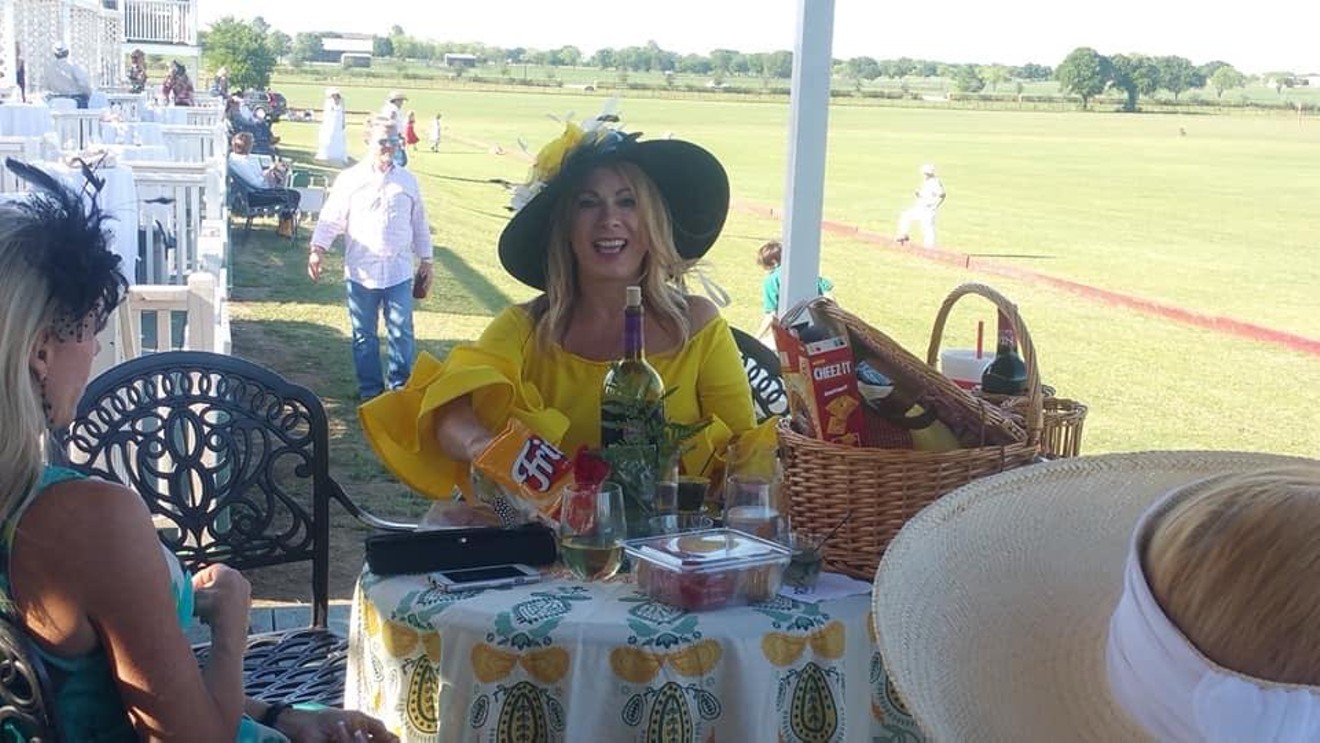 Dena Miller is out living her best life at a polo match. Courtesy
Former Mrs. Highland Park Dena Miller, national director of the Trumpettes of America, has a message for all her detractors on social media.

Sometimes that's hard to believe. Miller's Twitter feed resembles something a Russian operative might deploy to influence the masses. Her roughly 2,477 Twitter followers include news reporters, Whataburger and people whose bios say, "POLITICAL CORRECTNESS WILL KILL US ALL." Her comments, both in person and online, are takes not unlike some of the things President Donald Trump has said.

And this about reports of missing immigrant children separated from their families by border officials: “They’re not missing; they just won’t answer the phone.”

And this about transgender people: “As much as you want to be a girl, you will never be one.”

Miller believes what she and other conservatives are saying, and she's always got her fingers on the pulse of the outrage cycle that follows an outlandish comment from the president: The president speaks or tweets, someone is offended and then the press covers it all. Who ends up on top? To Miller, it's Trump.

“It was a smart business man who came down the stairs that day,” — Dena Miller, on Donald Trump's campaign announcement


"It was a smart businessman who came down the stairs that day," Miller says, recalling how Trump staged his announcement that he would seek the presidency.

Trumpettes of America is a network of socialites who attempt to build support for Trump among women by doing interviews with news media and blasting people on social media.

They're not to be confused with the little dancing girls at the Trump rallies, the U.S.A. Freedom Kids. Nor are they affiliated with Trumpettes USA, based in Palm Beach, Florida. There's also trumpette.com, a company that sells baby socks online.

This all got going in the days just before Trump started his campaign. In May 2015, Ralph Branscomb, a Trump supporter in Palm Beach, put together a group of women to prove to the country that women could benefit from a Trump presidency. It was called Palm Beach for Trump and eventually became "Trumpetes Global" (without the double "T"). That attracted women who belonged to Florida's ritzy country clubs, including Trump's Mar-a-Lago. Among them was Toni Holt Kramer, a socialite and longtime acquaintance of Trump's. Branscomb says he made her the first national director because of her proximity to the president through Mar-a-Lago.

But to Branscomb, Kramer and her gaggle of rich wives were supporting Trump only so far as they could be on TV. “All they do is public relations for themselves," he said via telephone. Miller, back in Texas and involved with the Trumpetes' efforts here, was attractive to Branscomb because she was hitting the streets, doing block-walking and making phone calls to potential voters. About the time Branscomb was done with Kramer, he was looking for someone in Texas to run the organization and picked Miller as national director. Three months ago, Trumpetes Global became Trumpettes of America, gaining a T but losing the world.

Undaunted, Kramer continues to lead her own group, Trumpettes USA.

"I am not familiar with Trumpettes [of] America, but I am delighted to tell you about Trumpettes USA," Kramer told the Observer via email. "I have completed over 150 interviews from Vanity Fair, Marie Claire, Politico, The Times in London, The Washington Post, Good Morning Great Britain, Good Morning Australia (I am scheduled again July 4th), and too many more to mention." Her group is "THE REAL DEAL," she wrote.

Miller beat out some stiff competition to take command of Trumpettes of America. Branscomb also considered LeeAnne Locken from The Real Housewives of Dallas, but the Bravo TV camera crews following her around have been too distracting.

So he went with Miller, the realest of housewives. She cooks breakfast for her husband every morning and takes her kids to school every day (at least the one not yet of driving age). On a recent weekend, she traveled to Houston for her son’s polo tournament on a Friday and drove back to North Texas the next day to be in Denton, where her daughter sang during the Denton Farmer's Market.

"I'm your biggest fan!" Miller yelled up to her.

On Sunday, she drove back to Houston for the final day of the polo tourney.


“It was a very sick thought.” — Dena Miller, on voting for Hillary Clinton

Before the situation with Kramer went down, Miller and her husband looked around at the field of Republican contenders and saw nobody they could support. They were all "garbage," she says. For a brief moment, she and her husband toyed with voting for Clinton.

"It was a very sick thought," she says.

Then Trump started to pick up speed, and Miller had her guy, who represented a revolt against political correctness.


Miller is the blonde, frosty-white smiled, big-personality stereotype of Dallas women, at least to people who don't live here. She drives a white Mercedes-Benz G-Class. She parks it at her home in Frisco. And every morning she cooks breakfast for her husband, Vaughn Miller, a real estate developer. Ever since she left her hometown of Jonesboro, Missouri, escaping to Texas in 1983 with her guitar player boyfriend at the time, Dallas has been her spot. She first landed in Houston when she was 18. She had spent her childhood in poverty, her parents on welfare, but as it is for any natural Dallasite, Houston was more than she could bear.

“Houston is such a miserable place,” she says.

On the advice of one of her friends’ moms, she moved to Dallas, her home for the last 30 years.

Her Twitter comments strike many on the left as harsh and callous, but that's not her fault, Miller says.

"That’s just a sign of how polarized American political discourse has gotten,” she says. “The left has gone too far left, and the right has gone too far right.” She believes Trump, through his brashness, will be the one to bring people back to the middle.

CNN used the Trumpettes for some of its Trump focus groups during the election. They watched the debates and gave feedback to help the news network gauge the national response. People around the internet noted that the Trumpettes involved were all blonde, white women. So Miller pushed the group to spice things up, adding women of color to the interviews and, in her mind, extinguishing claims that only white women support Trump.

Miller’s most recent brush with the politically correct news media came last week, when Gretchen Carlson, the TV journalist and chairwoman of the Miss America board, announced the the pageant will no longer include the swimsuit competition, seen as a victory for feminists. Miller — who won Mrs. Highland Park in 2012 and is the organizer for a local pageant, a preliminary contest for Miss Texas — says the decision is not a victory for anyone except the feckless executives at ABC.

Despite the rigorous body standards Miss America contestants must meet, she says, the swimsuit competition isn’t about the female body as much as it is about the long hours in the gym (and tanning bed) to achieve the perfect body. During a conference call last week with Carlson, Miller surmised that the move was nothing more than ABC's attempts to appease liberals. But the executives will learn the error of their ways, Miller says, when disappointed men stop watching.

A person not adept at Trumpian logic might say that's the whole point, to disappoint the sort of men who would watch a beauty pageant on television just to see perfect female bodies in bathing suits, assuming such men exist outside of penitentiaries. But Miller assures us that deep-sixing the swimsuits is just another nod to political correctness, which is bad. She encourages people not to be so invested in the divisiveness that seems to follow Trump everywhere he goes because in 2024, a new president will face new issues.

Her advice on how to get through the Trump era sounds like it comes from a Tumblr post of inspirational quotes for stay-at-home moms: "Get up, drink coffee, take your children to school, like you always have.”
KEEP THE DALLAS OBSERVER FREE... Since we started the Dallas Observer, it has been defined as the free, independent voice of Dallas, and we'd like to keep it that way. With local media under siege, it's more important than ever for us to rally support behind funding our local journalism. You can help by participating in our "I Support" program, allowing us to keep offering readers access to our incisive coverage of local news, food and culture with no paywalls.
Make a one-time donation today for as little as $1.