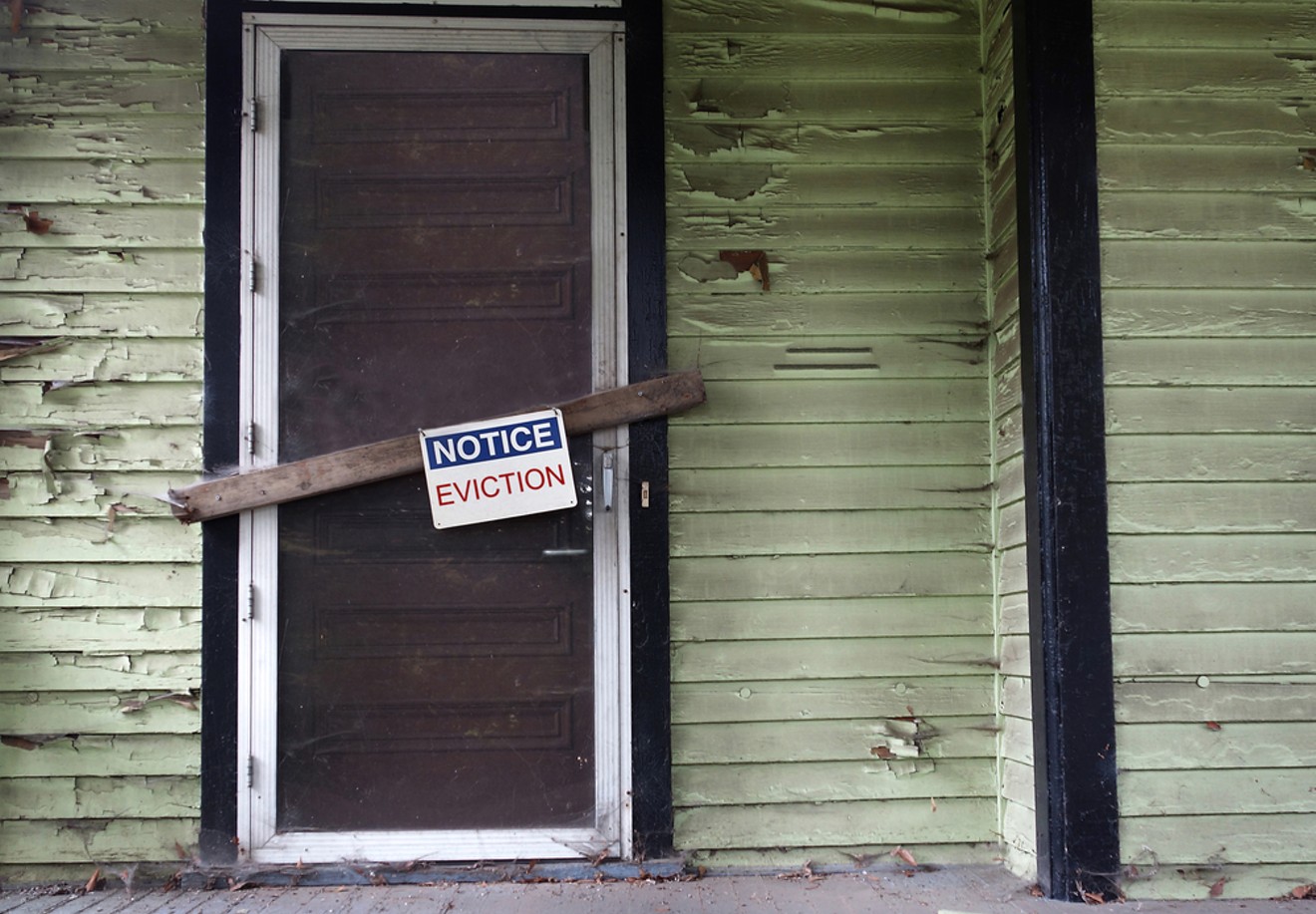 Lawyers with Dallas Eviction Advocacy Center hope they can create systemic change by representing every Dallas County tenant facing eviction. zimmytws
Local attorney Mark Melton wanted to know about how often local justice of the peace courts get eviction rulings wrong. So, he pulled every eviction appeal from the last year ending May 31. Of more than 1,500 appeals, landlords won their cases 20% of the time. Depending on how you look at it, that means lower courts got the other 80% incorrect. If it weren’t for the appeal process, the tenants in the bulk of those cases would have been wrongly evicted from their homes, Melton said.

Some are left out of this process, though, because of a rule that requires them to pay rent to the court registry while their case is on appeal. In other words, if they don't have enough money, they can't appeal their eviction.

But this could now change after a Dallas County court ruled that requiring tenants to pay rent to the court registry when they don't have the means is unconstitutional.

Under Texas law, tenants have five days after their eviction hearing to appeal. They can appeal through a bond, a cash deposit or an affidavit showing they're unable to pay. The bond amount is usually set at two or three times the tenant's monthly rent. The tenant can pay the court a cash deposit for the amount or file a bond. If the tenant files a bond, they're required to pay the court's registry one month's rent.

But if you can't pay the cash deposit or file a bond, you can fill out what's known as an affidavit of inability to pay. This keeps the tenants from having to pay court filing fees, but they still have to pay a month's rent for the appeal to be accepted. From there, they have to keep making rent payments to the court registry until the court decides on the appeal.

“This is a county court of law in Dallas County that ruled it unconstitutional. Whether people decide to ignore that or not is a different question." – Mark Melton, attorney

Kandyse Hunt lost her Dallas County eviction case, which would have seen her and her four children kicked out of their home earlier this year. Hunt wanted to appeal the ruling but she didn’t have the money to make the cash deposit and couldn't file a bond. After Hunt lost her eviction case, she got connected with the nonprofit Dallas Eviction Advocacy Center, which Melton and his wife started to help tenants.

The group connected Hunt to United Way, which set up a special fund to help tenants pay the court to appeal their eviction cases. It’s thanks to United Way’s fund that the Dallas Eviction Advocacy Center was able to keep so many people from getting evicted, Melton said, “But there’s still a lot of people who were not able to do that.” Hunt filed an affidavit of inability to pay and was going to pay the court with help from United Way.

Yet, when Hunt showed up with her United Way check to pay the court the month's rent, clerks refused to accept it. According to Melton, they said it had to be a cashier’s check. Melton said he emailed the judge, who initially said the court would take only a cashier’s check or money order. That’s when Melton sent the judge an email showing he’d accepted one of United Way's checks before. If Melton vouched for the checks the judge said he would take them, but this would only apply from then on. The single mom of four with a check in hand to pay the court? She was out of luck. The judge had already issued the writ of possession, allowing a constable to take control of the home.

“So, I ended up filing a lawsuit,” Melton said, “because even though she had appealed, his court never sent it up to the community court of law where I can do anything with it. There was no way to get a judge to even look at it because it was still sitting in his court.”

In the lawsuit, which halted the eviction, Melton alleged that there were constitutional problems with the process, including requiring people who don’t have the means to pay rent to the court while their case is on appeal. He filed it the night Hunt received her 24-hour notice to leave her home. It names the landlord – The Trellis at Lake Highlands – and the constable for that precinct.

When the tenant’s appeal finally went to the county court, the landlord asked that the case be dismissed. But Melton still wanted to see what the court had to say about his claims. The court agreed to hear the case and issue a ruling even though there was no longer a controversy between Hunt and her landlord.

The reason there are bonds in any kind of legal appeal, Melton said, is the understanding that an appeal can take time. “So, in a lot of regular lawsuits what they’ll do is they’ll post this bond so that in the event that they lose again, the other party isn’t harmed because they went and spent it all,” he said. “But in pretty much any other area of the law there’s this rule and a mechanism that says if you don’t have it, and it would really hurt you badly if we enforced it – the full amount of the bond – then we’ll figure out what you can afford and make you pay something smaller. But there is no mechanism like that in this statute.”

He added: “So, you’ve got a scenario where people are appealing their cases because they’re right, but they still get evicted because they can’t write this check to go be heard by a court that’s actually going to spend more than four minutes to listen to what they have to say.”

The court seemed to agree. Requiring a tenant to pay their rent to the court's registry while their case is on appeal after they filled out an affidavit of inability to pay, the court ruled, is “facially unconstitutional.”

To Melton, it’s hard to say what happens next. “This is a county court of law in Dallas County that ruled it unconstitutional. Whether people decide to ignore that or not is a different question,” he said.

Farwah Raza, a staff attorney with Legal Aid of Northwest Texas, told the Observer, “If you’re behind on rent, you know, you typically don’t have the rent to pay the landlord.”

So, it might make sense to waive such a requirement. However, because the recent decision on this requirement didn’t come from an appeals court, Raza said it's uncertain how this will effect eviction cases in Texas. “We’re a little unsure as to what the value of this decision is going to be practically,” Raza said. “Certainly for Legal Aid, we’re always looking for any way which we can defend our clients, so if there is a decision that can be used to help the client, of course we’re going to raise it. We just don’t know what that means for justice of the peace judges.”

Some may decide to implement the ruling in their court. Others may not. Even if they do, Raza said, landlords could always point to the Texas property code, which still includes the requirement.

But Melton said he and his team will be taking this ruling and making the same arguments all over town. He added, “We’ve already spoken with lawyers from other major cities in Texas, and they intend to do the same thing.”
KEEP THE DALLAS OBSERVER FREE... Since we started the Dallas Observer, it has been defined as the free, independent voice of Dallas, and we'd like to keep it that way. With local media under siege, it's more important than ever for us to rally support behind funding our local journalism. You can help by participating in our "I Support" program, allowing us to keep offering readers access to our incisive coverage of local news, food and culture with no paywalls.
Make a one-time donation today for as little as $1.