State Fair Paid $1,200 to Have Lawyers Read an Observer Story

Big Tex spent half a million bucks just to give the bird to people making public information demands about his finances. Jim Schutze
Want money? I’ve got some for you. You can double your income — possibly even quintuple, octuple, septendecuple it — depending on how fast you can read, simply by reading my articles. No, really. You know I wouldn’t scam you.

I just came across this. I was looking at an annual financial statement released last week by the State Fair of Texas, and I found a mumbled, behind-the-hand reference saying the fair “is involved in various legal proceedings arising from its operation of the annual fair.” Sounds kind of like somebody trying not to say what’s what.

So I looked at the fair’s most recent tax filings and saw that it was paying three-quarters of a million bucks a year to lawyers. Seems a tad stiff for a cotton-candy merchant. That led me to a lawsuit, and the lawsuit showed that the fair has spent more than a half-million bucks recently fighting open-records requests.

It gets better. The detail of the lawsuit includes this item on the bill from the fair’s lawyers: “Read and forward latest Schutze article; discuss.”

The item in the lawsuit doesn’t say how much the lawyers charged for forwarding my article to the fair or which story they read. I hope not too much. My stuff is always available for free online, after all, so it doesn’t really require forwarding.

Look, I’m telling you: You could read and discuss my articles, easy. In fact, you’re doing it right now. You need to get on the horn with the state fair right away.

It does trouble me a bit that it took them 96 minutes. I just tried, and I was able read one of my articles in four minutes while also taking micro-breaks to shop online. [Editor's note. You think he's kidding? Hah.] Yes, I admit, I skipped some stuff. Give me a break. I wrote it. You can’t blame a guy for getting a little bored with his own material. I’m sure you could read one in eight minutes. The money comes rolling in, man.

The State Fair of Texas has been paying Thompson & Knight for some years now in a lawsuit the fair filed to prove that it doesn’t have to respond to any stinking public information demands. The fair told the judge in the case that it isn’t a public entity — although it sits on public land and enjoys a long, close and extremely profitable relationship with the city of Dallas. And, you know, it’s the State Fair of Texas. It just looks really public.

Of course, we can have no idea if any of those things actually occurred because the fair, so far, has been so successful in stonewalling the requests. The Dallas Park Board, which is supposed to exercise oversight, is the fair’s totally captive lay-down handmaiden, so there’s no help coming from that quarter.

This lawsuit, which the fair is winning so far, is no joke, even if the fair did pay somebody 800 bucks an hour to read my article. The suit lies at the secret heart of power in Dallas because the state fair lies at the heart.

The board of directors of the state fair is made up of people such as John W. Carpenter III (freeway namesake), James Moroney III (recently retired CEO of The Dallas Morning News' parent company), Joel T. Williams III (former mayor of Highland Park) and John de la Garza III (lawyer with III after name), along with many pillars of the private Dallas Citizens Council, several former Dallas city managers and dozens of muckety-mucks, middle-mucks and aspiring muckettes.

The fair is a federally certified nonprofit. Its revenue numbers are part of what is in question. But somewhere in there, somebody’s making some money. The director of the fair, Mitchell Glieber, pulls down just under $800,000 a year in salary and benefits, according to federal tax documents. Not bad. Five state fair executives under Glieber make more than $200,000 a year. Another eight make more than $100,000. There’s some cash rolling around in there somewhere.

Some issues about the fair right now loom much larger than alleged hanky-panky with vendors and contractors. The city is involved in a bid process by which Fair Park, the 277-acre city-owned home of the fair, eventually will be turned over to a private operator and developer. But without a clear window into the finances of the fair, no private operator could begin to know how to run the place or even whether to try.

The fair is more than just the park’s anchor tenant. Because of the way the fair operates — virtually taking over the park for a period of months every fall — the first question for a private operator will be what to do with the fair. One choice is to leave it alone and collect the money, but that choice rules out most other options for using the park in some dramatic new way to keep it active all year long. 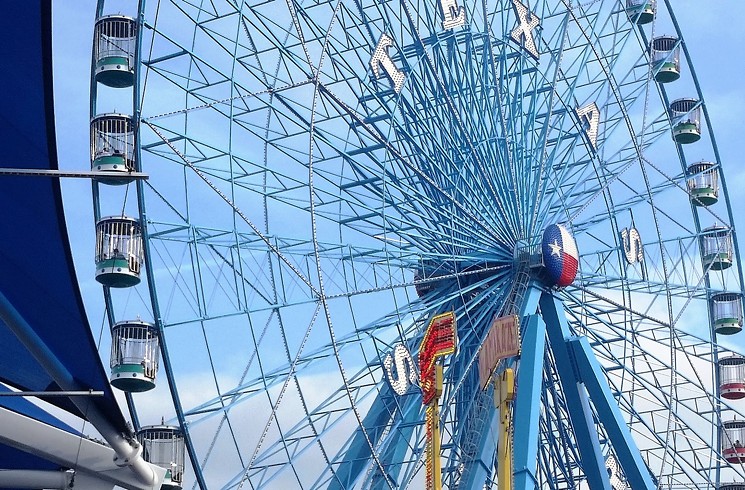 The greatest factor influencing deliberations about Fair Park is the dominant presence of the park's main tenant, the State Fair of Texas.
Jim Schutze
And what money? How can a private operator even know what the fair ought to be paying under the existing agreement when the fair shoots back so hard at anybody who dares ask questions? When Riggs & Ray, the Austin law firm, sent its list of probing questions, the fair didn’t even bother going the route prescribed by state law, which would have been to ask the Texas attorney general if it had to answer the questions.

The state fair went full metal jacket against Riggs & Ray, skipping the A.G. and suing Riggs & Ray to shut down the information requests. In October, state District Judge Tonya Parker sided with the fair and ordered Riggs & Ray to pay the fair $200,000 in legal costs, half what the fair said it had spent fighting the requests. Riggs & Ray is now appealing that decision.

Two or three principal animating forces are behind the Riggs & Ray attempts to learn more about the fair. One is Democratic state Sen. Kirk Watson of Austin, who championed unsuccessful legislation in the last session of the Legislature to render entities like the state fair more transparent under state law.

Another is retired real estate magnate Don Williams of Dallas. Williams is founder of a nonprofit community organization, Foundation for Community Empowerment, that has argued that the fair is an impediment to economic improvement for the entire region of the city surrounding Fair Park.

There is also a restive rump caucus on the city’s park board, made up mainly of younger board members who chafe at the subservient role the fair seems to assume they should occupy in the relationship. In small ways and big, the fair board always manages to telegraph that public officials, elected and appointed, are the summer help, but the State Fair of Texas goes on forever.


The board of directors of the state fair is made up of dozens of muckety-mucks, middle-mucks and aspiring muckettes.

And, you know, it does. This city can seem on any given day to have about as much relationship with its surrounding countryside as it does with the moons of Mars. The fair, on the other hand, is a deep well tapping the region’s agrarian roots. The more naive and carny it is, the better. It’s a hick, cotton-candy antidote to the city’s other, more pretentious tendencies.

The problem is never the fair itself, really. It’s always the board — the difference between a lovable hick and an arrogant one.

Williams and his foundation have focused economically and morally on the area around Fair Park, which remains a zone of intractable destitution in spite of heroic efforts by a number of nonprofits and churches. Running through Williams’ critique, a central theme has been that even the best carnival, the most fun party, the greatest state fair in the world is a sin if it conducts its hilarity in the midst of a misery that it studiously ignores.

Beyond that point, Williams, who was CEO of the world’s largest real estate company, cites examples of other big urban parks around the country and argues that Fair Park ought to be the engine driving the revival of its part of the city, not the anchor holding it back.

Everyone, with the exception of the fair itself, seems to have accepted Williams’ point of view on that, witnessed by the ongoing effort to privatize the park. As that decision draws closer, I think I may be picking up some smoke signals and vibrations indicating that the subservient caucus on the park board — probably reflecting the subservient caucus on the City Council that appoints its members — may be edging away from privatization of Fair Park altogether.

You should hope I’m wrong. Hope we get a good decision on what to do with Fair Park. The park and its role in reviving South Dallas are about as public and as important an issue as any we have before us in the city today.

Meanwhile, I’m trying to think of a way to cash in on that $800 an hour they’re paying people to read my stuff. You know, I would go to their offices and read it to them myself for $35 an hour. No charge for the discussion, and the forwarding is free.
KEEP THE DALLAS OBSERVER FREE... Since we started the Dallas Observer, it has been defined as the free, independent voice of Dallas, and we'd like to keep it that way. With local media under siege, it's more important than ever for us to rally support behind funding our local journalism. You can help by participating in our "I Support" program, allowing us to keep offering readers access to our incisive coverage of local news, food and culture with no paywalls.
Make a one-time donation today for as little as $1.