For JFK Conspiracy Wedding, Reception at Campisi’s, Where Else? 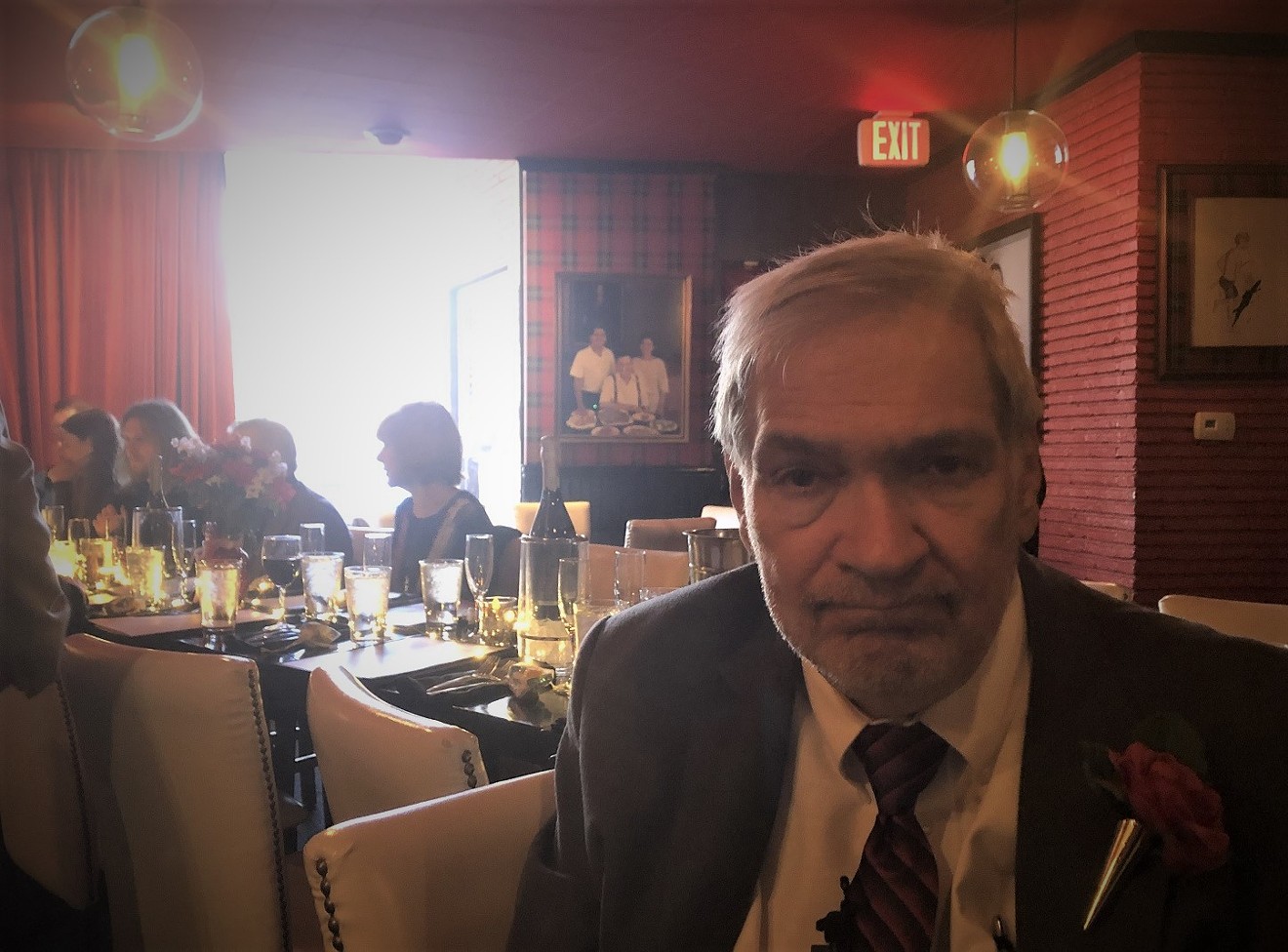 The Kennedy assassination has been at the center of his life since the day it happened on Robert Groden's 18th birthday. Jim Schutze
The Bryan Pergola at the top of the grassy knoll in Dealey Plaza has always struck me as an ugly monument to everything depressing in the history of Dallas. Built in the “early commercial style” of the early 20th century, it looks like a public restroom. It’s named for a Confederate. It’s where Abraham Zapruder, an unlucky Ukrainian immigrant in the schmatta trade, stood with his 8mm Bell & Howell Zoomatic Director Series Model 414 PD home movie camera on Nov. 22, 1963, and accidentally filmed the assassination of President John F. Kennedy.

But Monday, when I jaywalked against the light at Elm and Houston streets, afraid I might be late, a bright November sky was painting the pergola a brilliant white, transforming it into a church, a mosque, a temple made especially for these few, the faithful. I wasn’t late. They were just about to begin.

Robert Groden, a prolific author and famous person among that tribe of people who still study the Kennedy assassination, was about to wed Janet Hurley, a longtime follower and fan, in an open-air ceremony on a beautiful day in the place that has been at the center of their lives since the day the assassination happened. It's his second marriage, and she does not discuss numbers.

I wrote a lot about Groden a few years ago when the city was serially arresting him for espousing JFK assassination conspiracy theories in Dealey Plaza, where he also sold copies of his books, some self-published and some by major publishers. He has always been a central figure in the conspiracy theories whirling around the murder of JFK.

In 1975, on a network television show hosted by Geraldo Rivera, Groden and comedian Dick Gregory presented the Zapruder footage of the moment of the assassination for the first time it had ever been shown to the public. Since then, Groden has insisted the footage proves Kennedy was killed in a crossfire by at least two shooters, not by a lone gunman as the official inquiry had concluded.

Monday as I hurried up the hill, I saw D. Bradley Kizzia, the lawyer who defended Groden over the years and beat the city every single time they cited him, 82 times. Can you even imagine that? Dallas ticketed or arrested him 82 times, and the cases were all thrown out, every single one. They kept doing it until Kizzia forced them to stop.

Kizzia smiled and waved. We had never met in person. The processional music was about to begin — a song performed by Beverly Oliver on a portable karaoke machine. Groden leaned in to remind me in a confidential whisper: “She’s the babushka lady.”

Oh, yes, of course Beverly Oliver. She was 17 in ’63. She told conspiracy researcher Gary Shaw in 1970 at a church service in Joshua, Texas, that it was she who appeared in the Zapruder film wearing a suggestively Russian looking scarf around her head. She says she recorded the entire assassination on her Yashica Super 8 Zoom camera. The film, she says, was taken from her by FBI agents. It has never been recovered or found in any archive.

Certain assassination researchers claimed later that the camera she said she used was not released for sale until the year after the assassination, but Oliver said hers was an experimental model acquired before the commercial release. In Oliver Stone’s 1991 move, JFK, Oliver was played by Lolita Davidovich. Her character in the movie meets New Orleans District Attorney James Garrison in a Dallas nightclub, which did not happen.

Even standing a few feet away I couldn’t hear a single note of her song in the din of traffic and nearby construction. Her husband, Dr. Charles Massegee, performed the service. She whispered to me during the service that she and he are traveling evangelists.

The best man was Groden’s longtime partner in Dealey Plaza, Marshall Evans, author of JFK: The Reckoning, in which Evans asserts that secret surgical procedures were carried out on the dying president’s brain to throw subsequent assassination researchers off the trail. The liner notes promise: “Seasoned researchers will enjoy taking the next step in their journey, while being aghast at the details!”

Standing a few feet away was Shaw, who discovered the disputed identity of the babushka lady. Shaw,  author of Cover-Up and JFK: Conspiracy of Silence, is now identified in most JFK assassination literature as a “first-generation researcher,” as is Groden.

I was a little embarrassed when I asked Groden his own age, because he reminded me, with a look of some disappointment in me, that he will be 74 on Friday, which will be the 56th anniversary. Oh, right. I knew that.

It was his 18th birthday. He stayed home from school on Long Island that day. He and his sister watched it all that day and night on television. It was the first time the world had watched a momentous event unfold before its eyes in little glowing boxes in living rooms. Groden has been on the case ever since.

There were second- and third-generation JFK researchers at the wedding as well — Chris Gallop, who hosts an annual luncheon and symposium called “JFK, The Continuing Inquiry” at Dirty Job Brewing in Mansfield, and Ken Zediker, a researcher and photo expert who was born 29 years after the assassination.

The reception was in a wonderfully dark back room, highly atmospheric, at Campisi’s on Mockingbird (don’t even start). As guests trickled in and found their places at a long banquet table, I sat in a corner with the newly married, effusively happy Groden and asked him if he thought Dallas would ever get over it.

Suddenly grave, he said, “The people, yes. The city government, no.”

And then once again, he out-remembered me: “If you remember back to the 50th anniversary,” he said, “at the official get-together, the city gathering, the official word was that you could not mention the assassination. Never mind mentioning the conspiracy, you couldn’t even mention the fact that the president was killed here.”

On a beautiful, clear afternoon on Nov. 18, 2019, in Dealey Plaza, Dallas, Robert Groden wed Janet Hurley.
Jim Schutze
Oh, he’s right. It’s been six years. I had forgotten. They made a huge hoopla of it, brought in David McCullough, America’s favorite over-the-hill out-of-touch historian who loves how the white people beat the Native Americans. There were official prayers and somber speeches out the wazoo and enough security at Dealey Plaza for another assassination.


"If it hadn’t been for the city’s involvement, it never would have happened the way it did." — Robert Groden

But Groden is right. Nowhere in any of it was the word, assassination, mentioned. They called it “The Fiftieth.” But nobody was supposed to say 50th what.

The main point was how Dallas had put the whole thing behind it, how Dallas had gotten over it. There was some line about how much Dallas had improved because of it, which I found a little nervous-making, although I’m sure it was perfectly well-intended.

It was all well-intended, I guess, except that the intention was to banish the assassination, to exclude it from reality, shelve it somewhere under the lock and key of forgetting. Apparently, I didn’t need a lock and key.

So how transparent was that? We had an elaborate ceremony downtown with an army of cops and speakers from all over the place. Was there a jet fighter fly-over? Or am I thinking of a Super Bowl victory?

Anyway, we had this gigantic, elaborate event downtown, whatever it was. You weren’t supposed to say what it was, because they were afraid somebody would call it a celebration, which would have been extremely nervous-making. And you couldn’t mention the assassination, because, because. And this was supposed to show how Dallas had gotten over it?

Sitting in a dark corner of a dark backroom at Campisi’s watching all the conspiracists file in and take their places at the long lovely table, I did remember all of that, finally, and I remembered why that damned pergola at the top of the grassy knoll had always seemed so depressing to me and why it had always reminded me of a grungy men’s room. It’s because for so many years the pergola and the grassy knoll itself have been symbols of all that repression, all that oppression, the fearfulness, the cringing refusal to look reality in the face and tear it apart.

Here in this backroom at Campisi’s were the stubborn few, the tough little tribe who did just that. The city arrested and cited Robert Groden 82 times, and he never once stopped, and Brad Kizzia never stopped defending him, and the rest of them never stopped digging and researching and holding symposiums at Dirty Deal Brewing. I just love that, now that I remember it better.

All of what I am saying here is going to sound like a lot of fluff to Groden when he reads it. He’s not in this for the impressionism. Groden sees things in black and white. There is no gray. There are only secrets yet to be unearthed.

I asked him why the city of Dallas had worked so hard to make him go away and to banish even the word, assassination. He didn’t have any doubt.

“The city was to some degree involved in the assassination,” he said. “Officially or unofficially. If it hadn’t been for the city’s involvement, it never would have happened the way it did.

“The changing of the motorcade route, which was done by the mayor of Dallas and the CIA operative recruited by his brother, was what got the car to slow down and put it between the shooters, creating the crossfire.”

It doesn’t matter what I believe. It’s so easy for the many to command silence. It’s wonderful that the few refuse to shut up, even if you arrest them 82 times. And then they get married, and they’re happy. And as for those who may still want everybody to forget? All they need is just the least bit of patience. I know I’m doing my part.
KEEP THE DALLAS OBSERVER FREE... Since we started the Dallas Observer, it has been defined as the free, independent voice of Dallas, and we'd like to keep it that way. With local media under siege, it's more important than ever for us to rally support behind funding our local journalism. You can help by participating in our "I Support" program, allowing us to keep offering readers access to our incisive coverage of local news, food and culture with no paywalls.
Make a one-time donation today for as little as $1.