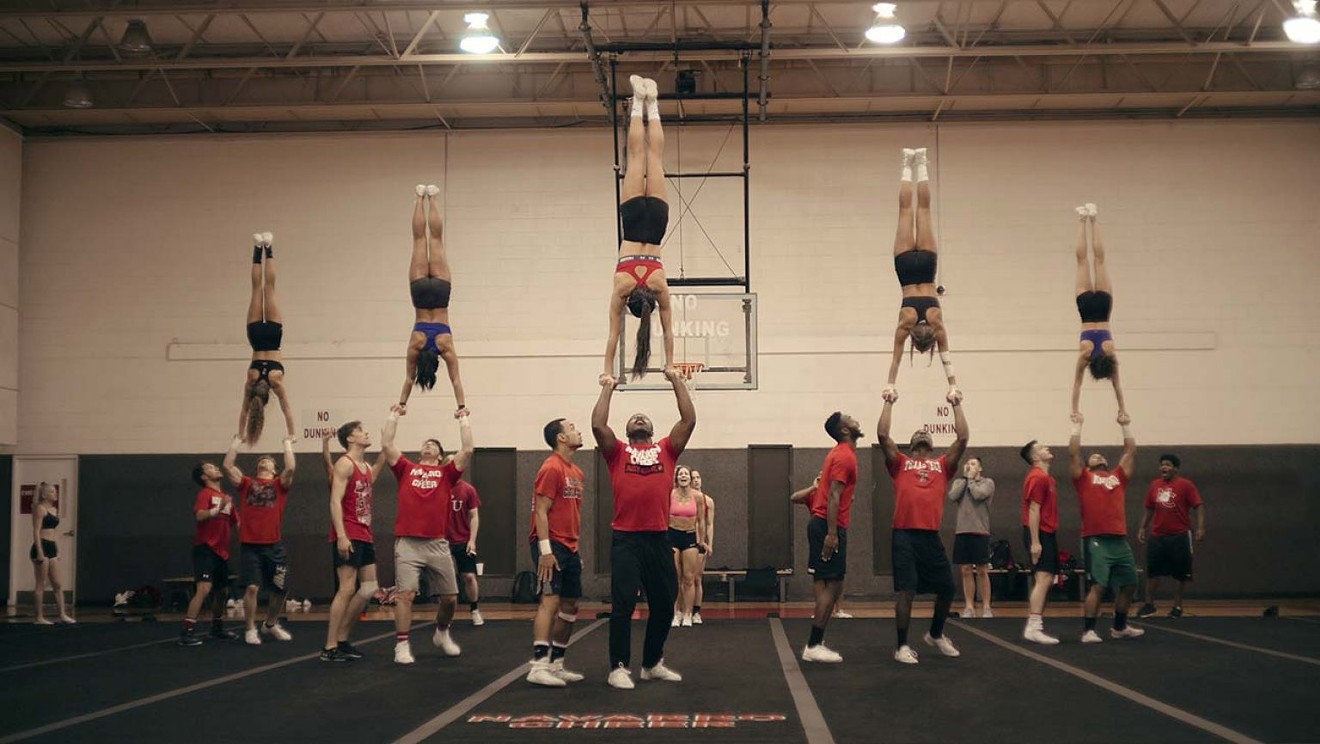 Netflix's Cheer faces yet another sexual abuse scandal. Netflix
It’s barely been a week since Netflix released the second season of the popular docuseries Cheer, and already another cheerleading coach connected to the show is facing new sexual abuse allegations.

In a lawsuit filed in Travis County earlier today, Carrie Methvin, a former family friend of cheerleading coach Jason McCartney, accused McCartney of sexually abusing her when she was a minor.

McCartney is a former coach at Cheer Athletics, one of the U.S.’ premier competitive cheerleading clubs. Cheer Athletics operates training facilities across the country, from Rochester, New York, to Denver, Colorado. The club was founded in Plano in 1994 and maintains facilities in Dallas, Frisco and Austin.

Cheer Athletics’ Plano franchise is depicted in Netflix’s Cheer, which focuses on the Navarro College cheer team’s path to the national cheerleading championships. The Plano facility was in Cheer's first season and was where McCartney worked until 2015, according to Cheer Athletics' media team.

In his role as a cheer coach, McCartney has had “unfettered access to young children over the course of the past two decades,” Carrie Methvin’s attorneys allege in court documents. McCartney worked in Cheer Athletics gyms in Frisco, Plano and Garland before becoming a part-owner of the club’s gym in Austin, according to court documents.

“This shows a pattern of failing to protect kids and of turning a blind eye. It’s so reminiscent, sadly, of what I saw in the sport of gymnastics.” - Michelle SImpson Tuegel

“We believe this is the first victim of Jason McCartney. This victim is significantly older [than the other plaintiffs], which means [McCartney] would’ve been able to continue abusing minors for decades after this,”  Michelle Simpson Tuegel, Methvin’s lawyer, told the Observer.

Tuegel also represented several sexual abuse and assault survivors in their lawsuits against Larry Nassar, the former USA Gymnastics doctor. Nassar was convicted in 2017 of sexually abusing hundreds of young women gymnasts over an 18-year period.

The lawsuit is the latest in a series of sexual abuse scandals connected to Netflix’s Cheer docuseries. The second season of the show delves into how Navarro’s cheer team reckoned with criminal charges against former teammate and fan favorite Jerry Harris. Harris, one of the stars of Cheer's first season, is facing child pornography and sexual abuse charges related to his alleged grooming and eventual sexual exploitation of two 14-year-old cheerleaders over a two-year period.

In 2018, a former Navarro cheerleader sued Navarro College, alleging that coach Andre McGee, who was featured in the first season of the Netflix series, had drugged and sexually assaulted him at a competition. McGee faced criminal charges that were dismissed later that year; the family continued to pursue a civil suit against the college.

"Mr. McCartney has not been an employee of Cheer Athletics Plano since 2015. Upon his move to Austin, there had been no complaints about Mr. McCartney's behavior," Cheer Athletics' Media Team wrote in an email to the Observer. "We were informed by the Austin franchise that they suspended him immediately upon notification of the initial lawsuit in 2021."

“This shows a pattern of failing to protect kids and of turning a blind eye. It’s so reminiscent, sadly, of what I saw in the sport of gymnastics,” said Methvin’s attorney Michelle Simpson Tuegel.
KEEP THE DALLAS OBSERVER FREE... Since we started the Dallas Observer, it has been defined as the free, independent voice of Dallas, and we'd like to keep it that way. With local media under siege, it's more important than ever for us to rally support behind funding our local journalism. You can help by participating in our "I Support" program, allowing us to keep offering readers access to our incisive coverage of local news, food and culture with no paywalls.
Make a one-time donation today for as little as $1.