Eat This: Abeba Foods To Go Kitfo Dulet and the Doro Wet Philip Kingston
Finding myself on Shady Brook for maybe the first time since I lived in The Village last millennium, I recently diverted to a tiny spot highly recommended by a friend of Ethiopian descent: Abeba Foods To Go, also known as Abeba Grocery.

The first thing you notice upon entering is that Abeba is really a grocery store stocking Ethiopian staples like lentils and spices and prepared foods in a cooler case. These are also Eritrean and Sudanese staples because of the circular persecution of refugees in those three countries. Abeba takes the Lone Star Card like other grocery stores, and one patron used it while I was waiting on my food.

Unlike some other grocery stores, Abeba is taking COVID-19 very seriously, and so are its neighborhood customers. There’s 100% mask usage and distancing even in the small space. 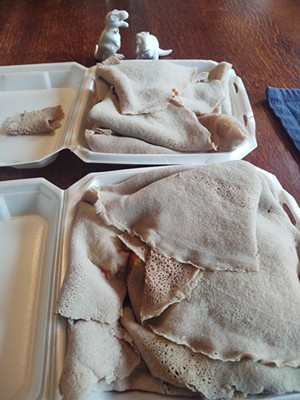 Plenty of sponge bread
Philip Kingston
We tried the kitfo dulet and the doro wet. Kitfo dulet is the timid Westerner version of regular dulet (also available at Abeba) replacing the liver and tripe with high-grade beef tartare mixed with onions, garlic and chiles and seasoned with mitmita, a blend of dried peppers, cardamom, and cloves.

No exaggeration: steakhouses should start doing tartare this way. It’s so much more interesting than naked beef with an egg. Regular kitfo without the vegetable ragout demands a return visit.

The doro wet combines braised chicken and a whole hard-boiled egg with a mixture of onions, garlic, ginger and of course lots of dried peppers. I offer no explanation for this, but the flavor closely matches my own chili recipe; so of course I think that’s delicious.

Everything is served with copious injera sponge bread (yes, I know that’s like saying “chai tea,” don’t @ me) that one is meant to tear off and use as the utensil for eating the entrees. This is great fun for kids (including this 48-year-old kid) provided they’re not spice weenies. Abeba does not offer weakened versions of its fare.

In fact, Abeba is not striving. It doesn’t appear to be trying to be anything other than a neighborhood-serving grocery and restaurant. Most of the customers arrived on foot while I was there, and the manager and I were the only people not speaking Amharic. Inside Abeba
Philip Kingston
That got me thinking about the neighborhood. Vickery Meadow confuses and confounds city leadership and has for a long time. Rapacious zoning plus lack of attention and public investment in this neighborhood produced blight. Walmart’s nationwide practice of leaving giant vacant stores lying around after killing any pesky small business didn’t help.

The silver lining in what official Dallas views as a real estate tragedy was affordable apartments that have served Dallas’ growing African and Asian immigrant communities, which official Dallas might also see as a tragedy.

Long before Vickery Meadow had the misfortune to be the epicenter of the U.S. Ebola “outbreak,” the great Jim Schutze chronicled the city’s ham-fisted and often cruel attempts to “clean up” the neighborhood, primarily by vilifying the residential landlords and then fining them, suing them and generally using the police to harass their tenants. The effort looked less like an operation to help people in Vickery Meadow than an effort to displace them.

It may be working. Dallas’ housing crisis is sparing no neighborhoods, and rents in Vickery Meadow are going up. We may be losing our ability to attract and retain talent from Africa, to put it in the economic development language official Dallas speaks. Actual human beings might call it something else.

What the city was ostensibly trying to do was to force landlords to improve their apartments for the benefit of the immigrants living there. In what should have, and didn’t, serve as a lesson for the West Dallas housing crisis, you can’t fine and sue and police an under-invested neighborhood into looking like Southlake. The only thing you get is displacement almost as though that were the goal in the first place.

What’s become searingly obvious in coronatimes is that you help poor people by using a tool known as money. If people can’t afford their housing at least one of two things is the solution: subsidize the tenants or their landlords.

Council’s funding of rental assistance in the pandemic is admirable (even if it’s not working quite as intended), but Vickery Meadow needs it in Normal Times also. If we can’t learn from the pandemic, what Vickery Meadow will get is another rebranding scheme placing Midtown inexplicably north of Uptown.

Abeba Foods To Go, 6882 Shady Brook Lane (Vickery Meadow). Open 9:30 a.m. to 9:30 p.m. daily.
KEEP THE DALLAS OBSERVER FREE... Since we started the Dallas Observer, it has been defined as the free, independent voice of Dallas, and we'd like to keep it that way. With local media under siege, it's more important than ever for us to rally support behind funding our local journalism. You can help by participating in our "I Support" program, allowing us to keep offering readers access to our incisive coverage of local news, food and culture with no paywalls.
Make a one-time donation today for as little as $1.