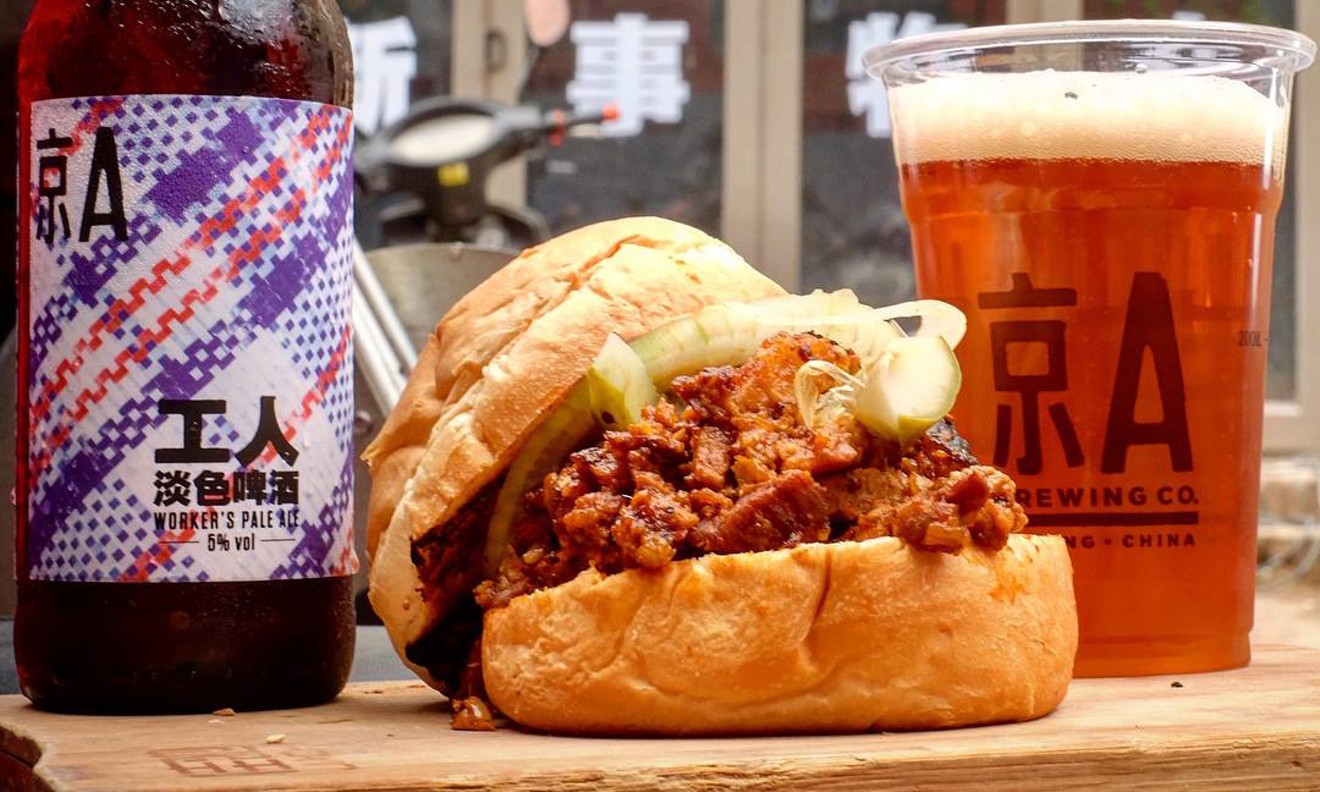 Dallas chef Andrew Dilda built a menu at Jing-A Brewing Co. Xingfucun in the Chaoyang District of Beijing. Jing-A Facebook
It’s nearly impossible to detect when a seismic shift in your life is approaching. You must watch yourself and your surroundings carefully, and there may be coincidental signs.

On a normal morning in Sanlitun, a bar district in Beijing, chef Andrew Dilda would walk out of his 40-story apartment building, where he lived on the 10th floor, to grab his bike and head for breakfast. His neighbor was a luxury car dealership, so he’d catch a mini-show on the way. The dealer’s employees would cautiously, carefully unload Lamborghinis. One time, the ramp slipped off the shipping container, and he watched a car that costs as much as starter home fall and very narrowly escape a nasty crash. The man who purchased the car was livid.

“I just got on bike and shook my head, and rode off and thought, 'This is China,'” Dilda says with a laugh. Maybe it was a random sign of change; maybe it wasn’t.

Next, on an average day, he’d huff it out the door to snag his usual breakfast with his new kitchen family. At the Jing-A Brewing Co. pub, he’d sit for a morning family meal of a couple of bao, a tea-boiled egg, and warmed soy milk with honey and cinnamon. The Jing-A kitchen always, always eats together for family meal — sitting side-by-side for tofu skins, stir fried, or bubbling hot pot after 12-hour shifts.

Dilda eats with them because he is their official Texas barbecue consultant. He shipped himself to Beijing in September to be Jing-A brewpub smoke liaison — sending flavor profiles from a region of cuisine that the Sanlitun bar district has never seen: Dallas barbecue.

Is Jing-A unique in Beijing? From chef Dilda: "There was one place very similar, and they smoked maybe two, maybe three times a week, but it was reheating. We were committed to smoking everyday.”
Andrew Dilda
Dilda’s barbecue career started with cattle testicles.

In many instances, he’s a man who says “bring it” when faced with a challenge. Dilda grew up in Mountain View, California, on a military base. Dilda’s father was in the Navy, writing programs for military aircraft. He wasn’t home much. As the oldest son, young Dilda took to the kitchen and learned to cook for himself and the family.

“I remember, as a kid, watching Great Chefs of the World and telling my dad I want to do that, and he’d say it’s going to take a lot of hard work,” he says.

Dilda speaks fondly of his father. The Dilda family moved to northern Fort Worth in 1993, and young Andrew got a job in a kitchen that served food for patrons of Eagle Mountain Lake.

One day, the prep cook didn’t show. The chef asked if Dilda could cut fruit.

“I can figure it out,” he remembers saying. Later, moved his way up to a cooking position at the lake spot — where he also, perhaps as premonition for things to come, cooked turkey testicles. The general manager apparently downplayed Dilda’s ability.

“He was like, no, he won’t make it,” says Dilda. Dilda took it as a challenge, so he worked his way up the kitchen from the bottom.

Later, calf testicles presented another provacation to start something. He and his ex-wife attended his former brother-in-law's cook-off, The World Championship Rocky Mountain Oyster Fest and BBQ Cook-Off in Throckmorton, Texas. There, challenged by big-name chefs among shots of tequila and dares, he landed a little prize.

“I was once ranked sixth or seventh in the world on cooking calf fries,” Dilda says. “I always wanted to win brisket.”

His bloodline might be a call to action as well. There’s a Dilda family legend, wildly unconfirmed, that a great-great family member was a pitmaster in North Carolina.

“Somebody once told [me] that because I was from California, I could never do true Texas barbecue,"  he says. "So I said, all right, I’m going to the best at it.”

“It took me doing Meat Fight, first year, just totally flopping on brisket and then calling up Travis Heim and going, all right, dude, this is what am I doing. Tell me where I’m going wrong.”

A month after the opening of Deep Ellum’s Independent Kitchen, where Dilda was executive chef, a mutual friend connected him to some beer-brewing dudes in Beijing. Kristen Li, Alex Acker and Dilda worked together remotely to build the idea: the Texas barbecue-inspired menu in China. Independent received some awards, and the food was revered. Meanwhile, Dilda had a smoker customized for Jing-A, a sort of hybrid-tank smoker, because of space constraints.

This year, he was let go from Independent Kitchen. It wasn’t mutual, and it’s hard for Dilda to talk about it. He was ordered, essentially, to go forth and pursue his interests in Beijing. When the opportunity arrived for him to fly out and shepherd the program in China, he responded quickly.

“Why the hell not?” he replies when asked why he jumped on this chance and moved to Beijing in September.

In his first week in China, he met Li and Acker in the hotel lobby. He walked through the steps with their team on how to make barbecue taste delicious. He developed a linear program — perhaps channeling his father’s skills — creating a smoking chart to follow. When meats showed up with a crunchy bark, there was concern that it was being burnt. Dilda ensured them it’s a damn good thing: The bark is one of the best parts of meat.

Beef ribs at Jing-A Brewing Co. are beloved, practically flying out of the smoker. Bacon is nearly impossible to acquire, so Dilda made his own using the powers of applewood. Finding American cheese for a cheeseburger has been like Indiana Jones trying to find the Ark of the Covenant. American beef was just as difficult to source — legally — so the team imports from Australia. 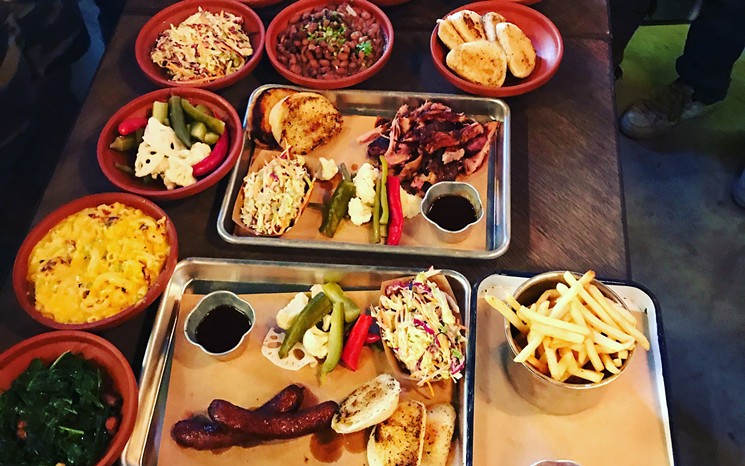 “No matter what we were doing on the line, it still translated the same way in the kitchen," Dilda says.
Andrew Dilda
A few days ago, the 2017 That’s Beijing Golden Fork Awards announced the winners. Jing-A Brewery won editor’s choice awards for American cuisine of the year and best pub food.

On the last day of service, Dilda worked late. He felt pangs of sadness for a couple of reasons. He’d miss the pub — he’d made friends — but there was a deeper root. He’d held onto some resentment about his father being shipped around so much, and, after walking “a half-mile in his shoes” he realized some things. He knows what it feels like.

“I was ready to be home, but I wasn’t ready to go back to my life of being in the kitchen.”

In the states, Dilda has taken a role as executive chef at Clay Pigeon Food and Drink in Fort Worth. What does he miss the most? The food, of course.

“The closest thing is Monkey King, but I can’t drive to Dallas every day to get the noodle,” he says.

Dilda works with Jing-A weekly, calling to check on his smoker and answer questions. He’s worked on a brunch menu for Jing-A. He chats with the team frequently on WeChat, via translator, to keep things running smoothly. Right now, there’s no talk of him heading back to Beijing.

“Every year after I do Meat Fight, I’m always thinking, 'I’m opening a barbecue place,'” Dilda says. “I’m like, this is the year I’m doing it. Then, two months after saying that, I’m like, no I’m not doing that.” And he laughs.