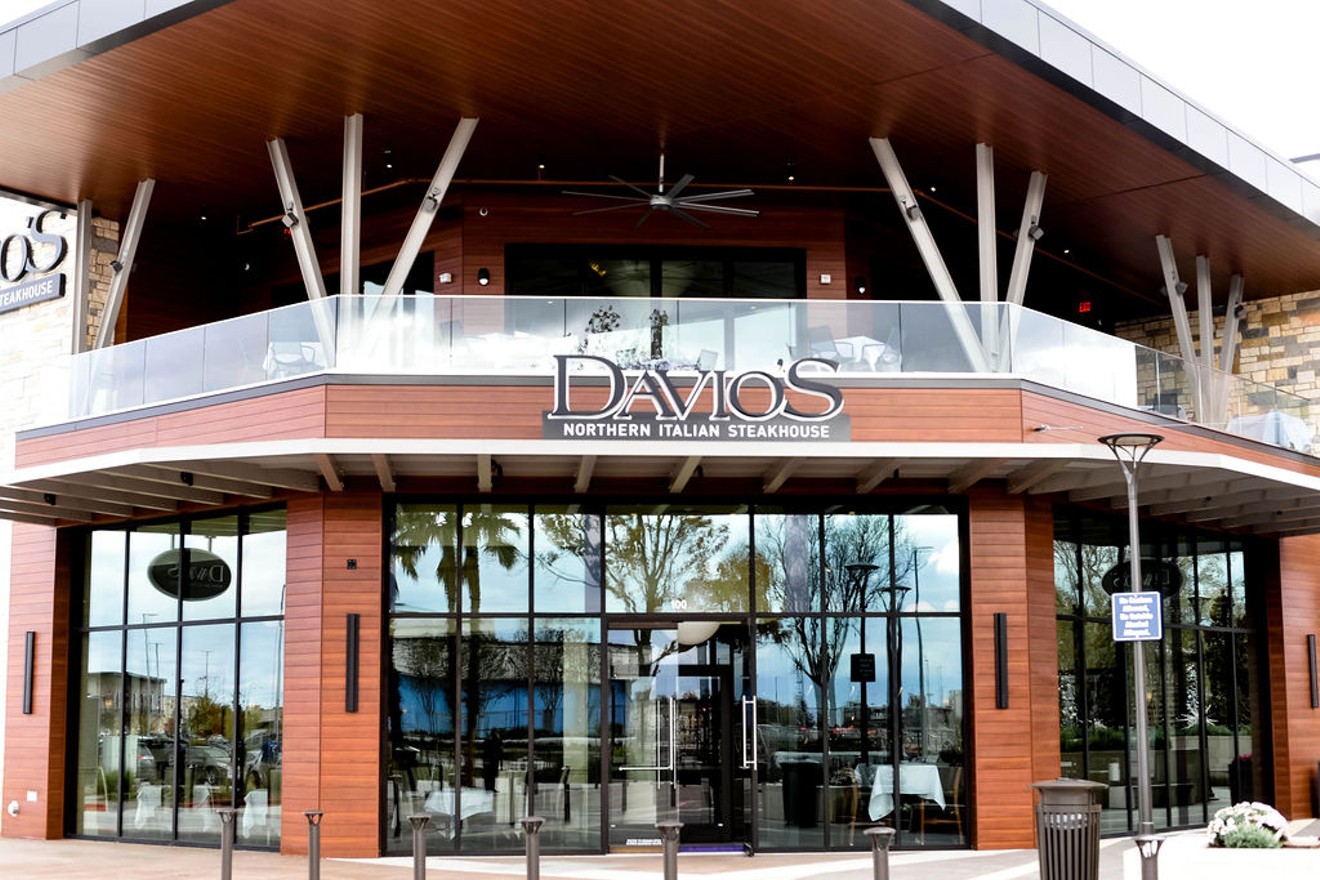 Davio's is part of the new mega Granscape complex in The Colony. Davio's Northern Italian
Grandscape is a massive multi-purpose Berkshire Hathway-backed development occupying 400 acres south of the Sam Rayburn Tollway in The Colony. It boasts a hotel and spa, an outdoor lawn and stage, restaurants, retail space, a theater and more.

Davio's Northern Italian opened as part of Grandscape in November and comes to North Texas by way of Boston. Chef-owner and CEO Steve DiFillippo purchased Davio’s, a single restaurant in Boston’s Back Bay, when he was 24 years old. He’s worked there (and only there) for more than 30 years, as have several employees at the original location.

There are now nine restaurants, mostly in Massachusetts and Pennsylvania, but DiFillippo insists Davio’s isn’t a chain restaurant, and he works hard to make it not feel like one. He and his wife own 100% of all the restaurants and there’s no board of directors. He also doesn’t have an office, choosing instead to travel frequently to spend time at each location.

The first impression of this very grand space is that it would be a great place to host a gathering, small or large. Eight private dining spaces, each decorated with European art chosen by DiFillippo, welcomes parties ranging from a lady's lunch to a wedding reception. The 22-ounce, 55-day prime-aged, bone-in cowboy steak at Davio's.
Davio's Northern Italian
Davio’s is also an elegant place for dinner for two or a couples night out. As a frequent solo diner, I can say I’d feel quite comfortable here, at either of the bars or seated in the main dining room. Patio seating overlooks a Grandscape courtyard and is available when the adjoining private room isn’t booked (and when crazy Texas weather allows.)

At a recent media preview, the antipasti dishes from the dinner menu exceeded the pasta offerings. A Kobe beef meatball was what you’d expect, but the oven-baked crab cake served with whole grain mustard sauce was exceptional. Another diner in my party tried the octopus and assures it was delicious, with a lovely texture and mild flavor. It was also beautifully plated, as was every other dish we tried.

The 55-day-aged prime strip steak was expertly seasoned, cooked to a perfect medium rare and served with spicy broccolini. The spicy cheddar croquettes (from the sides menu) made with aged cheddar delivered one of my favorite flavors of the night. Atlantic halibut swims in a crabmeat lemon butter sauce, and the kale served alongside was also a favorite at our table.

Happy hour (or any other hour) is a great time to try their spring rolls stuffed with cheesesteak, spinach and feta or chicken Parmesan. Pizzas with prosciutto and fig jam or pork sausage and basil pesto are also favorites on the bar menu along with a great steakhouse burger.

If you’re wise, you’ll end the meal with dessert. Vanilla bean panna cotta comes with fresh fruit and topped with a tuile, which is an impossibly thin, lightly sweet, wafer cookie baked in the in-house bakery.

The “Warm Chocolate Cake” is in fact a molten cake, but don’t turn up your nose too quickly. I found it to be a work of art. I had no idea what an Amarena cherry was, but after tasting one, I was sorry they were only used as decorations on the dessert. (For the curious, these are dark, sour cherries grown in Bologna and Modena, Italy, and bottled in a flavored syrup.)

I also had to look up stracciatella to discover it’s a specialty milk-based gelato with tiny chocolate shavings in it. It’s offered as a dessert on its own, but it’s really quite the topper when served alongside the chocolate cake. It takes a little effort to assemble the perfect bite from all the elements on the plate, but put in the work for a dessert bite you won’t soon forget.

The restaurant offers dinner service every night, brunch on Sundays and lunch service on Fridays and Saturdays. Through September, lunch can be packaged as a picnic to have in one of their courtyards, with salads, sandwiches and desserts. It even comes with a picnic basket and blanket.

Happy hour, with $10 bar bites and cocktails and $8 glasses of wine, is Sunday through Thursday from 4 to 6 p.m. The specially priced bites range from hamachi tartare and oysters Rockefeller to a chicken slider or deviled eggs with smoked bacon, pickled red onions and jalapeño peppers.

Davio’s Northern Italian Steakhouse, 5762 Grandscape Blvd., The Colony, 469-772-4810.
KEEP THE DALLAS OBSERVER FREE... Since we started the Dallas Observer, it has been defined as the free, independent voice of Dallas, and we'd like to keep it that way. With local media under siege, it's more important than ever for us to rally support behind funding our local journalism. You can help by participating in our "I Support" program, allowing us to keep offering readers access to our incisive coverage of local news, food and culture with no paywalls.
Make a one-time donation today for as little as $1.