Shake Shack has brought back the Hot Chick’n, a spicy version of the classic Chick’n Shack sandwich and one of the restaurant's most requested items to date TC Fleming
I never really know who reads this stuff. How many of you are the sort of Observer-obsessive who's keeping close enough notes to know a) that I write for the paper about once a month and b) that during those times I have written exclusively about places that have drive-thrus?

Oh, it’s none of you, and you want me to get on with the review?

Well, this is my first review of a store that won’t stoop to serving food through a window, but I’ve become comfortable with it by reminding myself we are still talking about chicken sandwiches, and that remains an area of comfort.

Shake Shack has always had a stellar chicken sandwich (the Chick'n Shack). Really, it bothers me that both this sandwich and the burger are served at the same restaurant. How can a person be expected to go to the counter and NOT order one of each of these two items?

Shake Shack — solve this. Open a chicken-only restaurant. This month, they’re bringing back a potential second item on the menu for this million-dollar idea I’m pitching: a spicy chicken sandwich, the Hot Chick'n ($7.09). 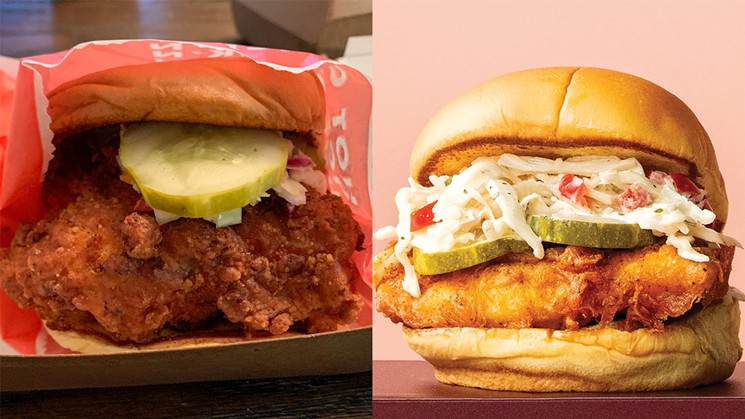 Left: Reality. Right: Promo photo.
TC Fleming/Courtesy
Really, what they’re introducing is a guajillo and cayenne pepper blend they can then apply to a number of existing items: the chicken sandwich, the chicken bites, the regular fries and the cheese fries. They can also vary how much they put on, offering hot, extra hot and fire levels.

The fire version can only be offered in the app: Presumably, this is to remove the risk of someone doing an impulse order at the counter and having them walk into something they hadn’t really thought through.

I did do some soul searching before my order and settled on the regular hot; I like some spice. It makes me feel alive. But I’m not looking to win any contests.

After a couple of bites, I had some regret over not living at least a little more, but the heat built up over time. By the end of the sandwich, I was happy I hadn’t tempted fate a little further. In the end, it adds a new level to an absolute classic.

The Hot Chick’n is made with real chicken breast (no added hormones or antibiotics) that's slow-cooked in a buttermilk marinade, hand-dipped into Shack-made batter, dredged through seasoned flour and crisp-fried. It’s then dusted with that pepper blend, topped with Shack-made cherry-pepper slaw and pickles.

Like with the Shack burger, a major factor is the potato bun. There may be breads on this earth just as good, but there are few that are better. The sandwich comes with a slaw that neither subtracts nor adds too much for me. (But maybe that's because there was far less on the one I got versus the one in the brand's photos.)

The full picture does add up to an enticing item we should all be glad to welcome back.
KEEP THE DALLAS OBSERVER FREE... Since we started the Dallas Observer, it has been defined as the free, independent voice of Dallas, and we'd like to keep it that way. With local media under siege, it's more important than ever for us to rally support behind funding our local journalism. You can help by participating in our "I Support" program, allowing us to keep offering readers access to our incisive coverage of local news, food and culture with no paywalls.
Make a one-time donation today for as little as $1.