Best Spots in Dallas for a Proper Bowl of Gumbo

The gumbo at Roots uses a recipe passed down from chef Tiffany Derry's mom. Alison McLean
As the seasons change and the crisper, cooler temperatures roll in, a bowl of gumbo always helps to get the good times rolling. Gumbo is probably the most popular dish in Cajun cuisine. Although the ingredients vary from one bowl to the next, gumbo is as emblematic of Louisiana as chili is of Texas.

In the gumbo world, there are two different varieties: Creole and Cajun, which many believe are like night and day. Creole-style gumbo usually has tomatoes and okra, whereas Cajun gumbo does not. Cajun-style is more prominent in Lafayette, (aka Acadiana/Cajun country) and surrounding areas, while Creole-style is more popular in New Orleans. Regardless of which style you prefer, traditional gumbo has either seafood or chicken and sausage. But, these days, you can also find more creative types of gumbo, like smoked rabbit, smoked duck, and for the vegetable crowd, there is gumbo z’herbes, which is loaded with an assortment of greens such as collards, mustard or turnip greens, spinach, chard and kale.

Oct. 12 is National Gumbo Day, and in celebration of another important food holiday, here are a few places around North Texas to get your fix:

Nate’s Seafood & Steakhouse has been serving authentic Cajun food in Addison since 1988. The owner, Nathan Peck, is a Cajun, and he offers four types of gumbo. Their seafood gumbo is a traditional Cajun with shrimp and crabmeat versus the Creole gumbo which also has shrimp and crabmeat but in a thick tomato and okra base. The chicken and sausage gumbo has fall-off-the-bone tender meat and sausage. And finally, their combination gumbo is a mixture of shrimp, crabmeat, chicken, and sausage over a tomato okra roux.

At Root’s Southern Table, chef Tiffany Derry serves My Mother’s Gumbo, which includes chicken, Zummo’s andouille sausage, shrimp and blue crab (photo at top). The roux is not as dark and thick as you often find in restaurants around here, which is a nod to a great gumbo. It has several large shrimp, chunks of sausage, and an actual crab cluster where, if you’re willing to spend the time cracking the shell, you’ll find deliciously sweet chunks of crabmeat hidden in the shell.

For those who live in southern Oklahoma (i.e., anywhere north of the Sam Rayburn Tollway), Bongo Beaux’s Bourre Palace & Cajun Kitchen in Celina is a wild, New Orleans-inspired and absolutely cool place to have a bowl of authentic Cajun gumbo. It is loaded with andouille sausage, chicken, shrimp and okra in a dark roux. 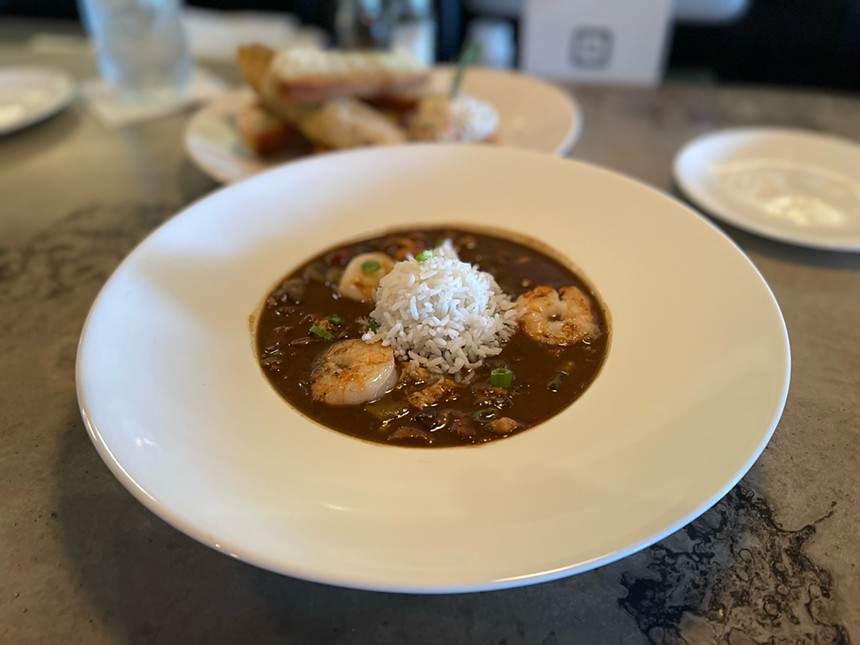 TJ's Seafood Market uses a dark seafood-based roux.
Angie Quebedeaux
TJ’s Seafood Market’s seafood and andouille gumbo has a dark rich seafood-based roux loaded with okra and andouille and several large fresh shrimp. It’s a little thicker than some of the other gumbos we’ve had, but we loved that it’s loaded with andouille and okra, and they actually include shrimp large enough that it needs to be cut in half to eat it properly.

Down in the heart of Deep Ellum, you can grab a great cup or bowl of gumbo at The Free Man while listening to some great live music. Their gumbo is also loaded with chicken, sausage, and shrimp. The nice twist is they put some blackening seasoning on the shrimp and sauté it before placing it in the gumbo. A lot of other places just dump the raw shrimp into the roux and let it cook in there, and it can end up a bit soggy and bland. It’s served with a small, sweet cornbread muffin which is perfect for dipping in the roux.

Bucky Moonshine’s Southern Eats and Bar, also in Deep Ellum, offers both chicken and sausage and seafood gumbo. They don’t mix the two together like other places. Their seafood gumbo has crab, shrimp and chopped oysters, which always adds a little something extra to the gumbo. It is nicely seasoned and loaded with lots of meat or seafood.

Rex's Seafood Market's gumbo
Angie Quebedeaux
Rex’s Seafood & Market has a seafood gumbo as well. The flavors of a good seafood gumbo are there, but it doesn’t have the large chunks of seafood that you would expect to see. Perhaps we visited on an off day.

Tasty Tails in Addison has more of a New Orleans Creole-style chicken and sausage gumbo. Unlike the Cajun-style, they add tomatoes to it, which is great. They also offer a lobster gumbo.

And tucked away in a strip center in Lewisville, Bayou Market is a dive serving up some fantastic chicken and sausage and seafood gumbo. There are probably no more than eight tables inside, and it’s a counter-service ordering kind of place. The great thing about Bayou Market is you can also purchase great pre-packaged Cajun meals to cook at home, such as their gumbos, crawfish etouffee, meat pies and crawfish pies.

Charlie's Creole Kitchen's gumbo
Angie Quebedeaux
Charlie’s Creole Kitchen (formerly the original Dodie’s) on the corner of Greenville Avenue and Richmond Avenue has been serving authentic Creole cooking since 1989. Their chicken and sausage gumbo has a lighter roux than what you would typically find in Louisiana, but it is seasoned nicely and has a great flavor without the need to add any hot sauce.
KEEP THE DALLAS OBSERVER FREE... Since we started the Dallas Observer, it has been defined as the free, independent voice of Dallas, and we'd like to keep it that way. With local media under siege, it's more important than ever for us to rally support behind funding our local journalism. You can help by participating in our "I Support" program, allowing us to keep offering readers access to our incisive coverage of local news, food and culture with no paywalls.
Make a one-time donation today for as little as $1.