Jollibee, The Filipino Chain, to Open in Dallas Proper, and You Need to Try It 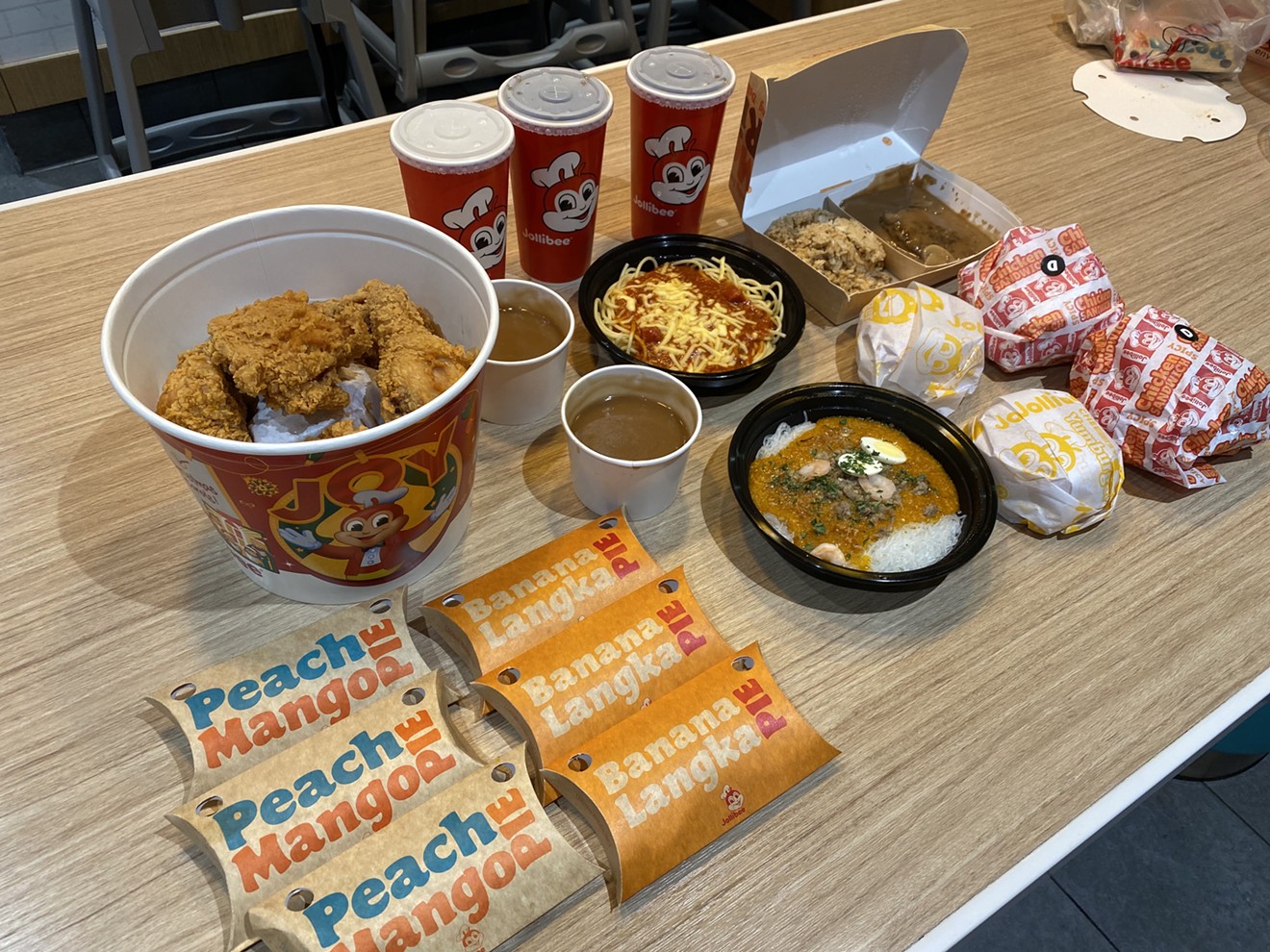 The full spread (just about) at Jollibee. Felicia Lopez
CultureMap broke the news last week that Jollibee is opening a new location in Dallas near Greenville Avenue and University Boulevard later this year. This will be their second location in North Texas, following on in Plano, which opened in mid-2020.

Many consider the fast-food restaurant Jollibee the McDonald’s of the Philippines; both have quirky mascots, a ketchup-red and mustard-yellow color scheme and a global presence. While Jollibee’s number of locations is modest compared with the fast-food giant, it outperforms McDonald’s in the Philippines, and its growth is increasing with a goal of adding more than 200 U.S. locations by 2024. They also recently acquired U.S.-based Coffee Bean and Tea Leaf and SmashBurger.

When Jollibee first opened in Plano, the response was tremendous. During the time, the “new norm” was still new, so only the drive-thru was available. Cars would form a long winding line out the parking lot onto Preston Road and over the President George Bush Tollway. Phone orders were available, but getting an actual answer instead of a busy signal was like winning the lottery. Local Facebook groups had fans sharing drive-thru wait times as well as alerts when the line was short. 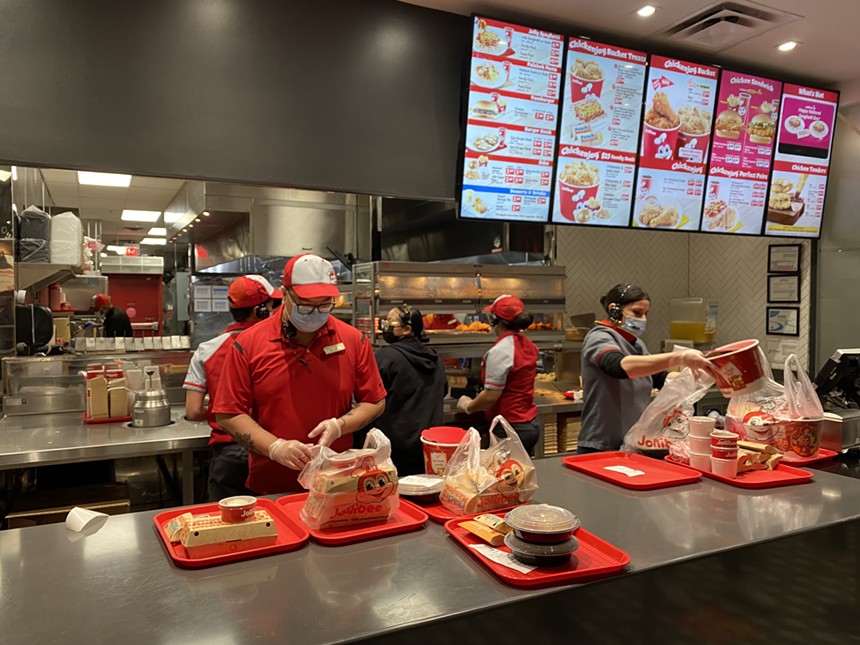 The Plano location opened in mid-2020 and has stayed busy.
Felicia Lopez
Those days seem long ago as the Plano location now offers dine-in and online ordering. But the popularity is still high, with long lines forming during peak hours and people driving from hours away to get their fix.

What might be more surprising is that Jollibee, being a restaurant born out of the Philippines, doesn't really serve Filipino dishes. Instead, it serves American fast-food fare with a Filipino flare. Think cutely named items such as Yumburger and Fiesta Noodles and fried pies filled with mango and peach.

To many, Jollibee brings a taste of nostalgia, either from their home in the Philippines or in the U.S. “The spaghetti always triggers childhood memories,” Izzy Pareja of Frisco says.

For others, the long lines stoked curiosity and word-of-mouth recommendations persuaded them to try it. Reviews were divided, with many loving the fried chicken and peach mango pies, and some not totally getting the concept of sweet spaghetti (more on that later). 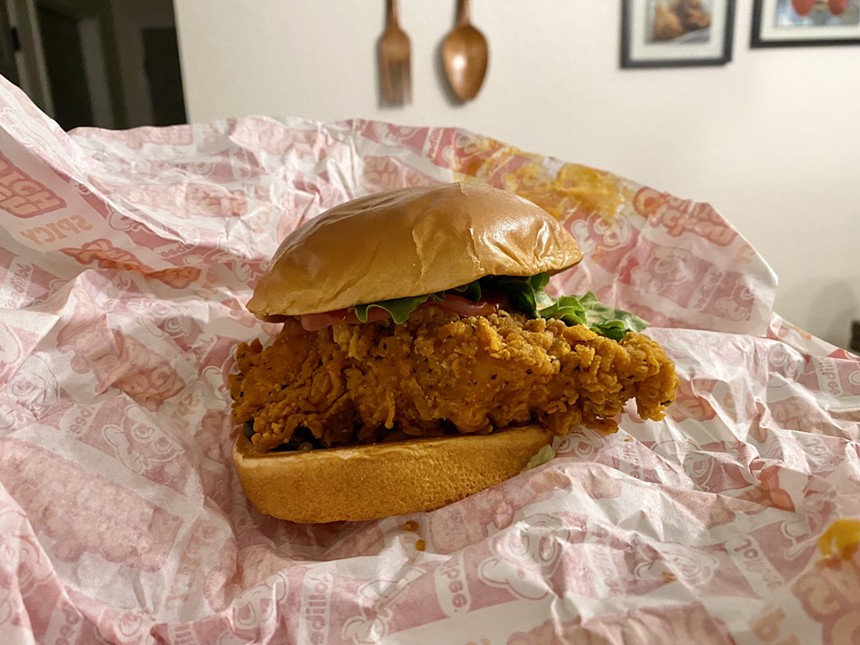 The spicy chicken sandwich at Jollibee.
Felicia Lopez
With the announcement of Jollibee’s second coming to North Texas, the first in Dallas-proper, we visited Jollibee in Plano on a Friday night for a refresher on why this is such big news. As we walked in, a man walked out said, “I drove six hours for this." I quickly asked if it was worth it, and he replied with a big grin and nod.

To get the full experience, we ordered almost the entire menu:

ChickenJoy
The fried chicken comes as legs and thighs in either original or spicy. If you prefer white meat, chicken tenders are also available. The highlight here is the crispy chicken skin, which maintains its crunch even the next day, and the brown gravy. Order this by the bucket (six or 10 pieces) or go super Filipino and get it with a side of white rice and ketchup.

YumBurger
This is basically a hamburger, but it is probably one of the best items on the menu and deserving of its name. The Yumburger is made with a beef patty, a soft bun and their signature mayochup. “The burger is simple. It kind of gives White Castle vibes, but is so much better,” says Sam Estacio of Celina. Dress it up with cheese, an extra patty, or go aloha style with pineapple and bacon.

Jolly Spaghetti
This is probably the restaurant’s most divisive dish. The Jolly Spaghetti differs from traditional spaghetti in that it comes with a sweet banana ketchup-based tomato sauce, sliced hot dogs and shredded yellow cheese. Don’t knock it until you try it; the late Anthony Bourdain once described it as “deranged, yet strangely alluring." An Italian coworker said it was pure blasphemy, but that still won’t stop me from eating this dish — it’s delicious.

Chicken Sandwich
The fried chicken breast fillet, which comes in original or spicy, is served with the umami mayo on a brioche bun. Their spicy deluxe chicken sandwich rivals Popeye’s spicy chicken sandwich and is levels above Chick-Fil-A’s version. The chicken is juicy, and the heat level is not exactly intense, perhaps an extra medium, which is attributed to fresh jalapeño slices and Sriracha mayo.

Burger Steak
This is Jollibee’s version of a Hawaiian loco moco, sans an egg. The dish consists of two burger patties covered in brown gravy and mushrooms and your choice of white rice or adobo rice (we recommend trying the latter).

Palabok Fiesta Noodles
This is the one traditional Filipino dish on the menu. Thin rice noodles are topped with a garlic sauce, shrimp, pork, a sliced hard-boiled egg, green onions and crispy chicharron (pork rinds). This is a dish commonly served at parties, hence the “fiesta noodles” moniker. Be sure to ask for a lemon wedge as it works well with the savory flavor.

Dessert Pies
The fried peach mango pie is a popular favorite. The pastry is perfectly crispy and the fruit filling has a perfect balance of smooth sweetness and tartness. Another pie is banana langka, a new flavor that recently took over the ube halaya pie. To Filipinos, the idea of “banana langka” naturally brings up turon, a fried lumpia dessert filled with fruits and caramelized sugar, however the pie kind of misses the point and one should just forever stick to the beautiful peach mango pie.

Long-time Jollibee fans will notice a few items are missing, including more Filipino-centric items like halo halo, buko pandan pearl cooler and corned beef with garlic rice and egg breakfast. There’s hope that they eventually make it on the menu, and perhaps Jollibee’s growing presence in Dallas will fuel curiosity and serve as a gateway to the cuisine.

“I think Jollibee in Dallas proper is a good thing. Hopefully, it will open more doors for Filipino food,” says Jed Pajela, who helps run the local pop-up Not Your Lola’s.

If Plano’s wildly popular opening in 2020 tells us anything, the Greenville and University location is going to be busy as a bee, but at least Dallas will finally have a place for their ChickenJoy and Jolly Spaghetti fix. If that doesn’t entice you, maybe the dancing mascot will.

Jollibee Dallas will be at 4703 Greenville Ave. and is expected to open later this year.

Jollibee Plano is at 1016 Preston Road in Plano, 10 a.m. - 10 p.m. Sunday - Monday.
KEEP THE DALLAS OBSERVER FREE... Since we started the Dallas Observer, it has been defined as the free, independent voice of Dallas, and we'd like to keep it that way. With local media under siege, it's more important than ever for us to rally support behind funding our local journalism. You can help by participating in our "I Support" program, allowing us to keep offering readers access to our incisive coverage of local news, food and culture with no paywalls.
Make a one-time donation today for as little as $1. 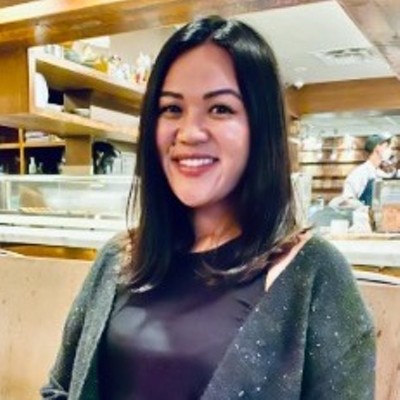