After Immigrating to the U.S., 2 Brothers Work Their Way from Busboys to Restaurant Owners Mario (left) and Ivan Urtecho are the owners of La Comida. Gustavo Contreras
Mario and Ivan Urtecho know and love the Mexican food industry. They’ve worked every possible role at a restaurant — from busing to serving to managing — since coming to the United States in the 1990s. With La Comida, they finally took on the role of owners.

The Urtechos hail from the Yucatan region, where cochinita pibil, a pork dish, is king. For the past three years, they’ve put their focus towards La Comida in Addison, a vision they had their whole lives growing up in Cancun.

“We’ve had the name La Comida since Hurricane Gilbert in 1988,” Mario Urtecho says. “You could see people with nothing to eat; food was important. Our relatives owned bakeries, so we ate nothing but bolillo rolls for about two weeks. So, we were like OK, we’ve got the name: La Comida, the food.”

After leaving for the United States in the '90s, the brothers worked as busboys in North Texas. They joke that they’ve come to terms with being known as a team after trying to forge separate paths in the restaurant business. After a bit of networking and negotiating, the brothers reunited while working for Mi Cocina.

The Urtechos were instrumental in opening various locations and were sent in to improve places that weren’t doing well. They’re very proud of the job they did reviving a restaurant in Kansas City. 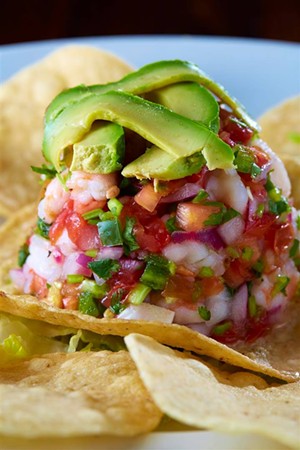 La Comida's shrimp ceviche
Courtesy of La Comida
They’ve tried to build their clientele with customer service and the motto “knowledge is power.”

The Urtechos say that many Mexican restaurants fail not because their food that lacks authenticity; it’s their customer service. Taking care of people is a pillar of the restaurant industry in Mexico, they said, where it’s also acceptable to have a career as a waiter.

“Being a server, you have to know 100 percent of the menu,” Mario Urtecho says. “We want people to sense we’re going the extra mile. Other restaurants just want the money. We want to keep the legacy of good Mexican service.”

Along with service, they wanted to bring the tastes from their home in southern Mexico. Their restaurant combines Yucatan and Tex-Mex flavors on a multitude of platters such as ceviche, cochinita pibil tacos, enchiladas and chicken mole.

The brothers say La Comida is only the start. Once they feel the current location is secure, they want to expand their business outside of North Texas.

“We’ve been motivated since we were little,” Ivan Urtecho says. “We grew up around Señor Frogs and Carlos’n Charlie's — dreaming like that. We want to keep growing.”

KEEP THE DALLAS OBSERVER FREE... Since we started the Dallas Observer, it has been defined as the free, independent voice of Dallas, and we'd like to keep it that way. With local media under siege, it's more important than ever for us to rally support behind funding our local journalism. You can help by participating in our "I Support" program, allowing us to keep offering readers access to our incisive coverage of local news, food and culture with no paywalls.
Make a one-time donation today for as little as $1.
Gustavo Contreras
Follow:
Twitter: @guscontreras21