The Kahuna burger at the Peak Inn has a slaw, under good crinkle-cut pickles, tossed in a house-made Thousand Island for $7. Nick Rallo
He’s been a bartender in Dallas for 15 years — nearly every bit of it behind the same bar — then Joel Morales found himself delivering burgers to doorsteps in the neighborhood.

It was late in May when the Peak Inn reopened, and he was hunting for every angle possible, any alternative revenue stream during the Great Restaurant Pivot of 2020, to keep money coming into his dive bar in historic East Dallas.

Recently, he did some sobering math — up until a couple of days ago, the Peak Inn was only open about 60 days more than they’ve been closed (since November 2019). The hits keep coming.

“And this is our first eight months!” he blasts. “The ability to open and shut my business without a vote or the banging of a gavel really sucks.”

When beef prices hit $5 a pound, Morales scooted over to the Bass Pro Shop to purchase a meat grinder. He hauled it over to Peak, stuffed brisket and bacon into the grinder and ground it into his burger patties because chuck had gotten so expensive per pound.

“I knew my stubbornness was going to pay off.” – Joel Morales


The 5-ounce patty gets a sear on the blazing griddle — a crust embroiders the ends of the patty — a classic American cheese blanket, chopped lettuce, onion and pickle. Burger grease is a condiment to be wielded, not discardable fodder for an absorbent paper plate.

Peak Inn knows the power of good grease — all of those toppings sit proudly under the smoky patty as beef juices come down like rain from a tin roof. It’s a spectacular burger, and it’s seven bucks.

“I knew my stubbornness was going to pay off,” Morales says with sincerity. “I’m not going to fucking fail.” 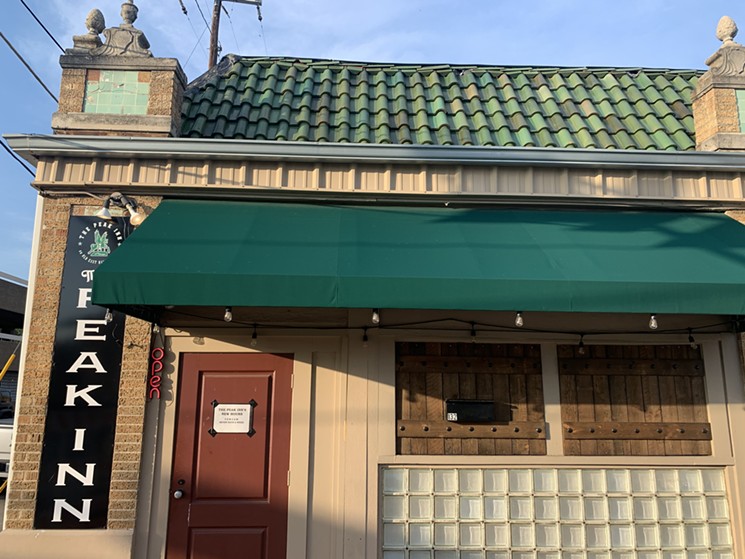 The Peak Inn is open for pick-up and delivery only.
Nick Rallo
In the past months, “the wheel was spinning the hamster.” The ups and downs of the pandemic have rolled him, in other words, spiraling him into uncharted territory.

These days, he feels the “innovation juices” roiling up again. The Peak Inn reopened late May, and, to his knowledge, he can report no one’s gotten sick under his umbrella.

He’s watching the numbers and wearing a mask. He’s sending out blue plate specials — spaghetti and meat sauce with a side salad and garlic toast or a two-taco meal — for the service industry. They hit after-work shifts in waves — 10 p.m. to 2 a.m. is a busy time these days — ordering burgers and cheesesteak-stuffed egg rolls. It keeps the bar moving.

The Li'l Kahuna — the same ground in-house blend with a cooling slice of American cheese and a slaw enriched with in-house Thousand Island dressing and zapping crinkle-cut pickles — is a not-so-hidden gem. It holds up in delivery, and, with some hot, salty tater tots, you can recreate a full diner experience in your living room.

On a recent call, he’s in the lot behind his Deep Ellum original, Adair’s, meeting up with his burger bun contact. They are Signature Baking rolls, soft and chewy bread with a buttery sheen that encapsulates the entire burger.

Buns in hand, he’s headed back to the Peak Inn to open up shop. While he zips around the city, sandwiches and sides for the service staff, the ability to pay his own and turning the lights on are signposts of success right now. There’s no “raking it in” — there is, simply, a chef’s hustle in a time of pandemic and sensational cheeseburgers at the Peak Inn.

Peak Inn, 132 N Peak St. (East Dallas) Open for takeout 5 p.m. to 2 a.m. daily; delivery via Uber Eats. Call 214-377-8828 for takeout.
KEEP THE DALLAS OBSERVER FREE... Since we started the Dallas Observer, it has been defined as the free, independent voice of Dallas, and we'd like to keep it that way. With local media under siege, it's more important than ever for us to rally support behind funding our local journalism. You can help by participating in our "I Support" program, allowing us to keep offering readers access to our incisive coverage of local news, food and culture with no paywalls.
Make a one-time donation today for as little as $1.
Nick Rallo
Contact: Nick Rallo