Take a Look Inside Prohibition Chicken, the Lewisville Chicken Joint With a Speakeasy 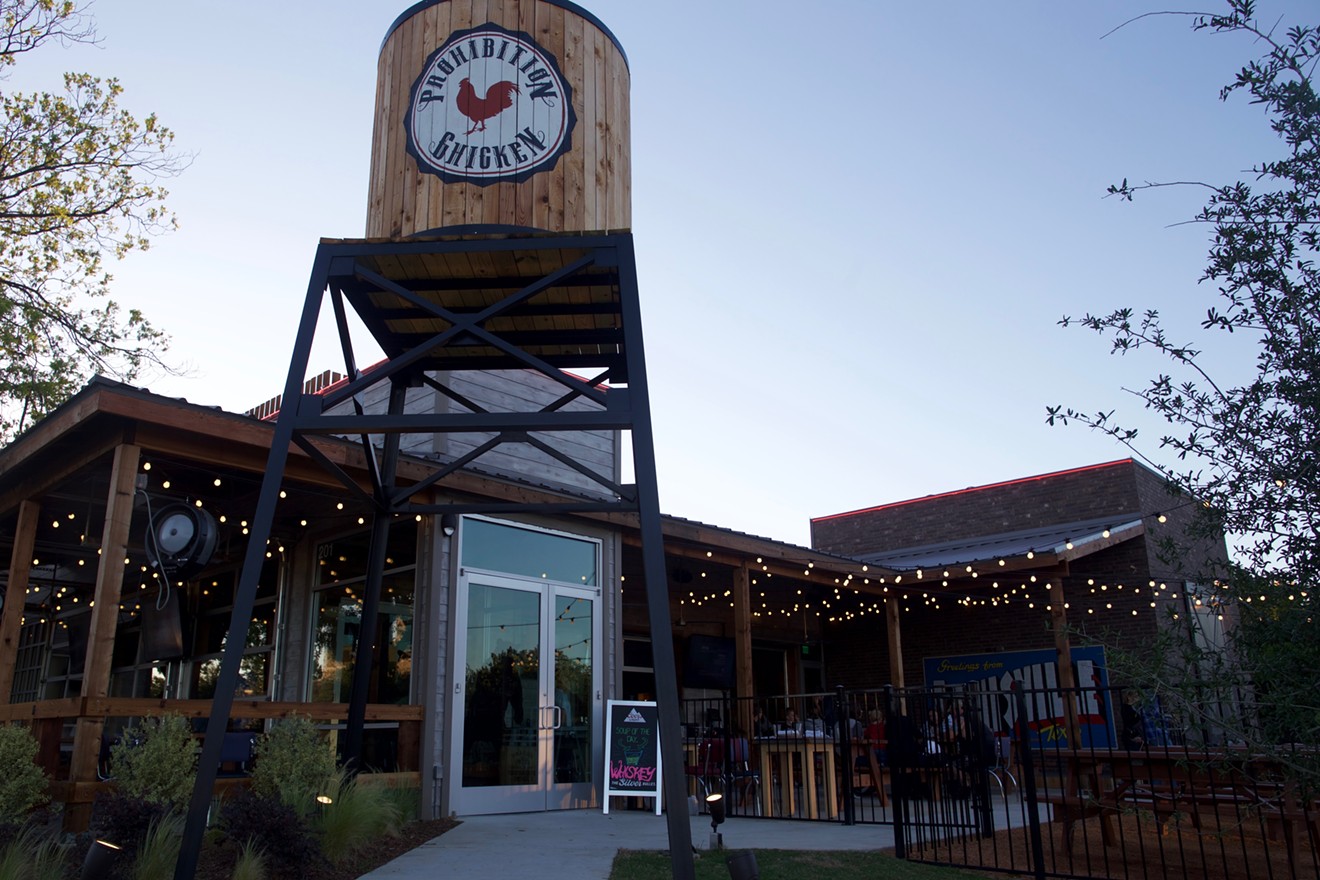 Prohibition Chicken promises live music on the weekends on their spacious patio. Chris Wolfgang
For 13 miserable years, the United States experimented with Prohibition. It shuttered saloons but gave rise to speakeasies, hidden bars that met the demand of those who still wanted an occasional drink.

Chicken four ways.
Chris Wolfgang
While Babe's Chicken sets the pace when it comes to Southern family-style fare in DFW, Prohibition is clearly aiming at the same target. As you walk up to the patio, a sign directs diners to the main entrance "under the water tower" and, once inside, it's evident that owners spent a small fortune on reclaimed barnwood paneling. Keeping with the Southern charm, bluegrass and alt-country covers of rock songs are mixed in with Johnny Cash and Willie Nelson playing overhead.

Prohibition is involved in raising their own fowl in conjunction with Texas-owned Dunbar Hollow Farms, and serves the birds four ways: crispy fried, hot chili fried, "smoke fried" and pecan-smoked. For $19, diners get a half-chicken, and the table must agree on two hot and two cold sides. If chicken isn't your thing, go for a pound of smoked beef tri-tip for $31 or a whole grilled lake trout for $24. You can add a "big salad" for an extra dollar per person, and a basket of four smallish cornbread biscuits will set you back another $3.50. If we're making Babe's comparisons, Prohibition feels a step behind at this point; $13 at Babe's includes all the sides, biscuits and salad, and keeps them coming until you cry uncle.

Don't be like this guy - fill your plate!
Chris Wolfgang
The gap narrows when it comes to the proteins. Naturally, we tried every variation of chicken, and are pleased to report that all are solid choices. The fried options were all juicy and tender, but the smoke-fried was our favorite – the smoke flavor permeated the meat and the batter both and reminded us of the amazing fried chicken at Slow Bone. The pecan-smoked bird was also good, but curiously was served lukewarm; midway through the meal, other pieces of chicken would still be warm on the inside, but the smoked chicken was already cold. The appeal of sneaking into a secret bar via a telephone booth can't be understated.
Chris Wolfgang
We were less impressed when it came to side dishes. Patrons are forced to choose two hot sides and two cold sides for the entire table, a rule that exists for reasons unknown. The mashed potatoes and mac and cheese were unremarkable, although splashing some of the included jalapeño cream gravy spiced up both dishes.  We wanted to try the shaved Brussels sprout, fennel and orange slaw, but it was sold out, so we settled on the original creamy Southern slaw instead, which was drowning in a mayonnaise base. The cucumber, tomato and red onion salad, while simple, was a winner.

Prohibition's speakeasy is a cozy space that will offer over 50 whiskeys and a small bar fare menu.
Chris Wolfgang
Prohibition wins points for offering a full bar. The cocktail menu is expansive, and a whiskey-heavy special cocktail menu will be presented in the speakeasy, which unfortunately wasn't yet open the night of our visit.  We were able to sneak a visit to the speakeasy, however, and the appeal of sneaking into a secret bar via a phone booth is strong. In addition to the over 50 whiskeys, small bites will be served in the speakeasy, but patrons can only stay in the hidden bar for 90 minutes.

Prohibition Chicken has a lot of things going for it. The slight misses on the food front are easily offset by the speakeasy, an impressive cocktail list, the spacious patio, and promises of live entertainment. We're hardly ones to preach temperance, and with Prohibition, there's no need to start now.