These Sno-Balls, Served From the Back of an East Dallas Burrito Spot, Were Touted by ‘Bon Appetit’

Ruby's sno-balls are made with more natural flavors and ingredients than typical fluorescent-colored, saccharine versions. Amanda Albee
As the season of perspiry underarms and scorching steering wheels ramps up, it’s good to know where to find relief. While adults tend to turn to ice cream and frozen margaritas for quick satisfaction, snow cones made with syrups like blue coconut and tiger’s blood are more commonly associated with kids — perhaps because it’s hard to be taken seriously with Blue Man lips, or maybe they’re too sickly-sweet for a grown person’s palate.

But hidden to the side of East Dallas’ best Mexican breakfast restaurant, La Victoria, is a New Orleans-style sno-ball spot named Ruby’s with flavors, not syrups, made in-house by owner Jessica Fultner. A peek behind the walk-up window reveals shelves of produce, teas and coffees, along with a SnoWizard ice-cutting machine named “Brrrnice” that slivers blocks of ice into a texture that could be described as fluffy, almost even creamy.

In a piece titled “Ice is the New Ice Cream,” Ruby’s Sno-balls caught the hard-to-get attention of Bon Appetit in its September 2018 edition for selling authentic sno-balls far outside of New Orleans. The cherry limeade flavor bedecked with maraschino cherries is pictured among a coffee kakig?ri from New York City, a matcha patbingsu from Montreal and a lemonade shave ice from New Jersey — all incredibly alluring and rivaling any ice cream.

Fultner admits she has no idea how the magazine discovered her. She hasn’t paid for any advertising and refrains from posting a sign where those driving down Haskell Avenue can see. She purposefully wants to keep it small, in part because she’s unsure if she would have time to keep making her flavors in the way she presently does.

While Ruby’s has classic syrups like bubblegum for kids and all who remain so on the inside, it’s the specialty flavors that deserve multiple visits. When the Bon Appetit article was published last year, Ruby’s was preparing to close for the season at the end of September. At a time when cold treats begin to give way to thoughts of cider, Fultner was making flavors like spiced honey orange, pomegranate, spiced pear and pumpkin pie. Then, after Old Man Winter has finished with the city, Ruby’s reopens each year on the first day of spring, and for a brief two-week period, there’s honeysuckle picked from Fultner’s own backyard. She finds the flavors lose their potency when frozen, so “everything in here has an expiration date on it,” she says. 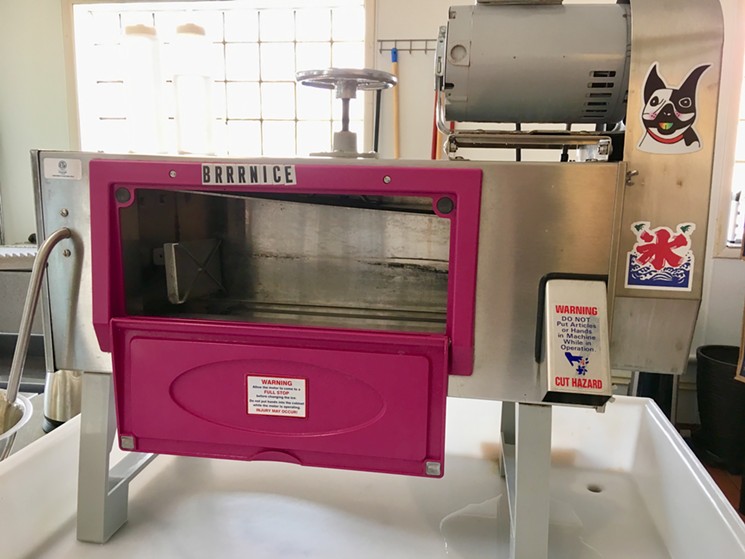 Say hello to Brrrnice, the SnoWizard machine.
Amanda Albee
Fultner’s simple syrup recipe made with a thin amount of pure cane sugar is added to macerated strawberries, strongly-brewed coffees and slushy watermelon that’s been repeatedly strained down to its finest form. Not all flavors are sweet. Right now, there’s a jalapeño flavor that comes recommended with limeade or cantaloupe. There’s mint and cucumber. Sometimes there’s ube, a purple yam popular in Philippine desserts, or Lebanese tea, a black tea, lemon and rosewater blend topped with pine nuts that comes from New Orleans’ Mona’s Cafe. An updated menu is posted on the website every Monday.

During off season, Fultner spends extended time in New Orleans, where her husband, Scott Fultner, is from. It was on a visit with him to the institution known as Hansen’s Sno-Bliz that she became interested in sno-ball making. It originated in the 1930s when Ernest Hansen invented the first motor-driven ice shaving machine, with his wife Mary creating her own syrups at a time when bottles of liquid sugar weren’t a thing. A machine Ernest built in 1939 is still in use today at the shop on the corner of Tchoupitoulas and Bordeaux streets. His machine was granted a patent in 1950, but it’s never been shared outside of the family business, just like Mary’s top-secret recipes that are still being used.

Fultner was so impressed by New Orleans’ sno-ball scene that she asked another shop owner for a job with the purpose of learning how to shave ice — it takes practice and skill, she insists. The owner turned her down, saying it wasn’t possible to have a sno-ball business outside of New Orleans, where some shops still supposedly get their ice from 100-year-old ice houses.

It was George Rubio’s Sno Gourmet, now called Sno, in North Dallas that made her believe it was possible. In 2015, she started serving sno-balls at friends’ parties. She intended to get a cart, but then invited her friend Vicky Zamora of La Victoria to a tasting to ask if she could use her back space for prep. Zamora, whom she got to know from eating lots of Don’s Delight and Zack Attack breakfast burritos, enthusiastically responded, “Yes, you can even serve from the back room!”

Fultner left a miserable job as a maintenance dispatcher in a retail store to open Ruby’s in 2016. The first year, only Fultner shaved the ice she makes from filtered water. She refers to that year as “first pancakes.” Now, after learning the technique and the best location to store ice in the freezer, a couple of employees are entrusted with the task. Still, only Fultner makes the flavors.

Ruby’s is named for the Fultners’ imperfectly marked Boston Terrier who died of Cushing's disease after 11 wonderful years together. She’s painted with a lagging rainbow-colored tongue next to the ever-changing menu at the order window.

“She’s our mascot,” Fultner says. “This was my way of keeping her around.”