The ShackBurger and Chick'n Shack with dill pickles. Nick Rallo
Dallas is, without a doubt, in the ancient Rome phase of cheeseburgers. We are flourishing with beef adorned decadently with curtains of American cheese and Martin's soft potato rolls. We have everything: The Caligula-esque Fatburger, a California chain, will open at least 50 locations in Texas, joining the half-bacon insanity of the Slater 50/50 burger chain, In & Out, Five Guys and Shake Shack. Dallas is mad with beef sandwiches, and all roads lead to burgers. The newest addition is the polished, gleaming coliseum that is the Shake Shack franchise on Preston and Royal.

You will not escape Shake Shack. There is no outrunning it because Shake Shack is good. It has mastered fast food. Trumpets sounded in the air last night, and white smoke rose from from Preston and Royal as Shake Shack had its soft opening. Shake Shack Preston Hollow is a gleaming spike of sleek design, clean walls and sharp, armor-black ceilings. It promises ShackSauce, Chick’n Shacks, frozen custard with Emporium Pies and salty, crinkle-cut fries inside its walls. 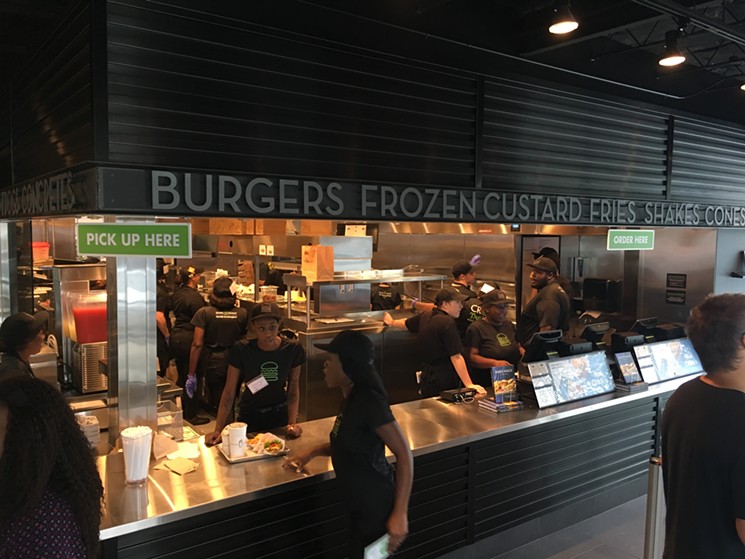 Shake Shack's third location in the city is now open at 6025 Royal Lane.
Nick Rallo
Shuddering in the shadow of its brilliance, I’m going to walk out on a plank and declare that Shake Shack’s fried chicken sandwich, a buttermilk-brined dash of brittle, crunchy chicken with a cooling sauce, just might be the best thing to order at the chain. The Shack Burger with ShackSauce is, of course, all Angus beef, griddle-smashed with joy with Martin’s potato rolls. The chicken sandwich is mountain-peak fast food. No other fast food chicken sandwiches beat it. The frozen custard is evil magic filled with pie.

Inside the new Preston and Royal Shake Shack, just off Royal in a way that’ll make you U-turn like Jason Bourne in a high-octane car chase into its lot, things are clean cut. There’s an open pergola-meets-patio, festooned with greenery in a concrete jungle. There’s enough wood running on the feature walls to bury the stars of Fixer Upper in jealousy. There are flat screens, and there are fries swaddled in cheese sauce.

When my buzzer buzzed, the staff hummed orders along and nearly sang with excitement. I felt like a Shack employee was one step from asking: “Are you not entertained?” I am, Shake Shack. We are. This Shake Shack is also walking distance from TJ’s Seafood, as a general for-your-information. I believe that I squandered the idea of walking across the parking lot to eat oysters like some Edwardian king.

Shake Shack's new patio.
Nick Rallo
The Preston Shake Shack is the third DFW location of the New York-based franchise. We are in the ancient Rome phase of cheeseburgers, and it shall be glorious.