The Armadillo is one of the fried food finalists being served at the Texas State Fair. Danny Gallagher
The Big Tex Choice Awards got to the cream-of-the-crop foods at the State Fair. This year 43 items were entered into the competition and 10 finalists were selected, all of which are literally put "on the map." Fairgoers can (and do) go from spot to spot indulging in the best creations of the year.

When the top 10 finalists were announced, at first we judged them with hungry eyes, based on looks alone. Since the fair has opened, we've attempted, over several trips, to try them all. Eating 10 things at the fair comes with its challenges. We hit most of them. Below are our findings.

It has a very nice flavor for a handheld fair dessert; not too rich or sweet. It's like a cinnamon and brown sugar Pop-Tart made by hand and without the cold, uncaring feelings of a machine that just spits them out by the pound. It's also easy to carry around along with that oversized stuffed Sonic you won at the balloon race tent. This should've gotten the Most Creative award for the presentation alone.

The brisket brittle gets the boot.
Danny Gallagher
One of my initial questions after seeing this item for the first time is if it came with the cowboy boot cup. Yes! It comes with the cup! Bonus!

The brittle is sweet with just the right amount of crunch. It has that satisfying, gooey texture that sticks to your teeth, but you don't mind scraping it off because the taste is so good and that just prolongs the experience. There are chunks of brisket in each piece but they don't really affect the flavor of the brittle much. Of course, putting more brisket in wouldn't really improve it. The Brisket Brittle is good but doesn't taste much different from above-average brittle.

Danny Gallagher
This sounds like a vegetable take on a snack treat you eat by the handful, like Corn Nuts or Bucc-ee's Beaver Nuggets, but it's more like a deep-fried take on a salad — or as close as you can get to one at the fair. The deep-fried corn nuggets are topped with a small but filling helping of delicious pulled pork and pineapple slaw made with a sweet and creamy jalapeño. It's probably the healthiest item you can get out of all the fried food finalists, which is the same as being the Hot Pocket with the most vegetables. However, it's much tastier if you're just looking for a light treat. 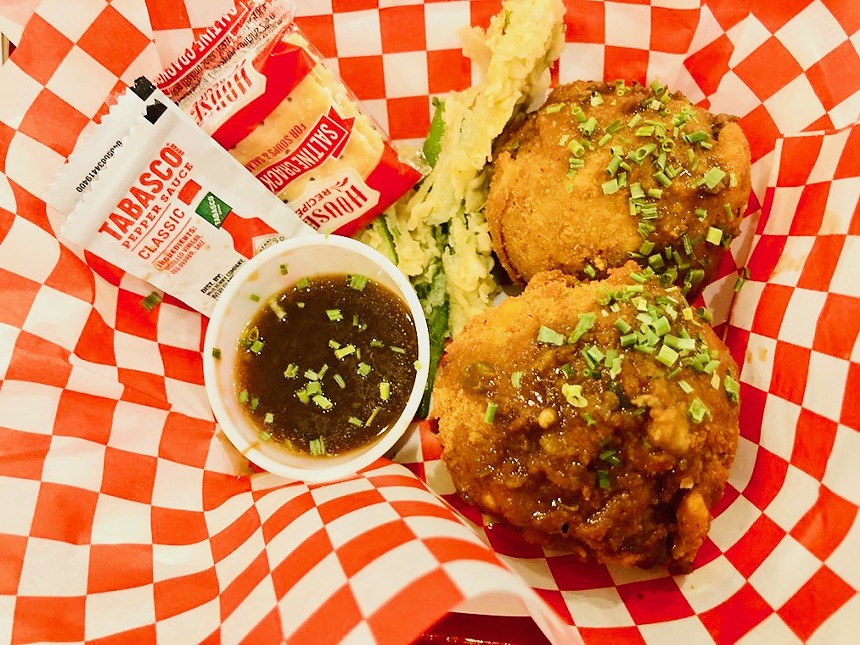 This item isn't just the most expensive item out of the Big Tex finalists, it's one of the most expensive food items at the fair at $25. Something that much for something slightly smaller than an average appetizer should be amazing. It doesn't even come close to that.


Each order comes with two giant fried seafood gumbo balls and a package of saltines and Tabasco sauce, which are a nice touch for Cajun cuisine. Neither can salvage this bewildering item. The fried outer shell gets in the way of whatever flavor is left of the gumbo after it came out of the deep fryer. The "seafood" part of the dish is barely there. Mine had a couple of miniature shrimp, which would probably be treated as a crime if this were the Louisiana State Fair. It has some spice and flavor, but very little. It's like biting into a giant breadcrumb.

Tejza Smith serves up an order of the Lucky Dump Dumplin' at the Texas State Fair.
Danny Gallagher
Eating all or even a majority of the Big Tex Choice Awards food finalists in one day is a tall order unless you've got a Joey Chestnut-esque digestive tract or some kind of death wish. This is the only item that I finished, and that's because it's just so good.

Each double-fried dumpling is filled with juicy cuts of duck, cream cheese and sweet corn and comes with a tangy sweet and sour sauce. The combination is delicious. It's like eating a duck Rangoon that's just a tiny bit thicker. The insides are a complex mix of sweet and savory and may look small but it's very filling and satisfying. This is so well made, it should be on a restaurant menu somewhere outside of Fair Park.

Danny Gallagher
The snootier part of me hoped that I wouldn't like this item. Dishes like these made with zero regard for things like unnecessary nitrates or saturated fat are what make the Texas State Fair famous. They are popular and eye-catching because they make nutrition cower in fear at its very presence.

The taste is so good that it gave my inner Niles Crane a panic attack. Each Pork Bomb is a slice of thick-cut bacon wrapped around a small scoop of baked macaroni and cheese with a small slice of sausage on the bottom. It's like a spring roll for people who don't care anymore, and it's amazing.

The bacon is crispy on the edges and chewy in the middle as the grease explodes with every bite. The macaroni and cheese has the right amount of burnt on the top and the middle is soft, eggy and stuffed with cheese. The sausage flooring is plump and juicy. I didn't finish these but only because I didn't want to erase another month from my lifespan.

Texas Pumpkin Poke Cake
Kathy Tran
This fall-inspired dessert is from the Highland Park Soda Fountain booth in the Tower Building. The cake is dense and warm, with strong, but not overpowering, pumpkin flavor. It is what it says. The caramel drizzled over the top is warm and soaks into the pores of the cake. It's glorious. You'll chase the remnants of the caramel with the last bites of cake. We're about to get a fire hydrant of pumpkin spice flavors, and this is a great way to start off the deluge.
KEEP THE DALLAS OBSERVER FREE... Since we started the Dallas Observer, it has been defined as the free, independent voice of Dallas, and we'd like to keep it that way. With local media under siege, it's more important than ever for us to rally support behind funding our local journalism. You can help by participating in our "I Support" program, allowing us to keep offering readers access to our incisive coverage of local news, food and culture with no paywalls.
Make a one-time donation today for as little as $1.