Tavern-style pizza at DL Macks is thin, but doesn't have the requisite crispiness. Amy Meyer
Chicago is “My Kind of Town.” Public transit that hauls you to any part of the city, a vibrant dining scene, culture galore and a beautiful lakefront. Beyond the hustle and bustle of The Loop, you’ll find neighborhood taverns with Old Style (think Chicago-style Lone Star) signs aglow, serving glorious pizzas made of cracker-thin crust piled high with sausage and cheese to soak up the aftermath of staying out until closing time, 4 a.m. (Yes, 4 a.m.)

DL Mack’s recently opened in the Park Cities, boasting a Chicago-inspired backdrop and offering a taste of the city’s tavern-style cracker crust pizza. The Observer sent a native Chicagoan to report back with not only a first look but an evaluation on the authenticity of the restaurant. 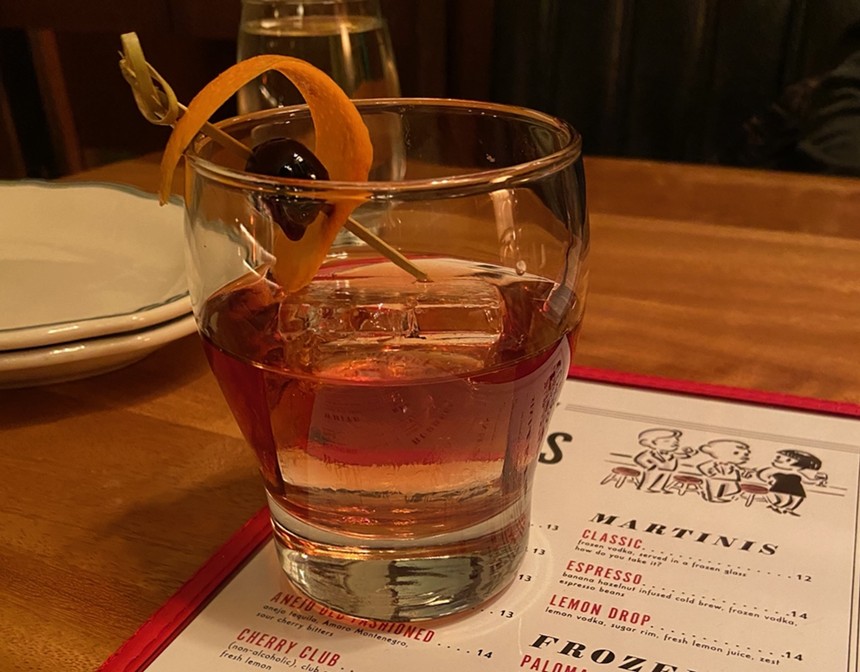 The Añejo Old Fashioned is made with aged tequila.
Amy Meyer
DL Mack’s is the fifth concept from Texas-owned-and-operated Vandelay Hospitality Group, best known for Hudson House and Drake’s Hollywood. The space is small, with 10 dark leather booths, some bar seating and an outdoor garden patio with a retractable roof. Reservations are highly recommended, as there was not an empty table in sight, even on a Tuesday night after the dinner rush. Parking is also extremely limited; there's valet in the back.

At the entrance, nothing jumps out as characteristically “Chicagoan.” Sure, there are pictures of Chicago sports teams on the walls and a big sign that reads “Chicago Fur Storage,” but you wouldn’t know how much work went into creating this theme unless you read the press release about it. When we asked what the history was behind the big fur storage sign, the server had no clue. If you do your homework, you’ll learn they used reclaimed antique brick dating back before the Chicago Fire and the sports memorabilia on the wall is from a collection of vintage works sourced from The Art Institute of Chicago.

Other vintage relics such as a 1960s theater exit sign and laurel tiles pulled from the Chicago Civic Center are really neat in concept, but really hard to appreciate as a diner when none of this information is available within the restaurant. The wooden benches on the garden patio are apparently inspired by the Chicago Transit Authority, and no, not the Peter Cetera fronted kind, but the city’s public transit. The question is, who would even notice this detail if it wasn’t pointed out? We wouldn’t recommend sitting on those benches on the train platforms when visiting the city anyway.

The interior feels more upscale than your neighborhood tavern, reminiscent of something you’d find in the heart of the city as opposed to your corner neighborhood haunt. The menu consists of classic American cuisine with an emphasis on house-made ingredients. We were advised that all the sauces were made in-house, but were unaware that all dishes are prepared from scratch daily.

The menu was simple: appetizers, salads, sandwiches, specialty entrées and the Chicago-style cracker crust pizza. We started with Mack’s fries, mozzarella sticks and chicken wings. Mack’s fries are garlic potato wedges with a trio of dipping sauces, and they were decent, but most of the flavor came from the dipping sauces. 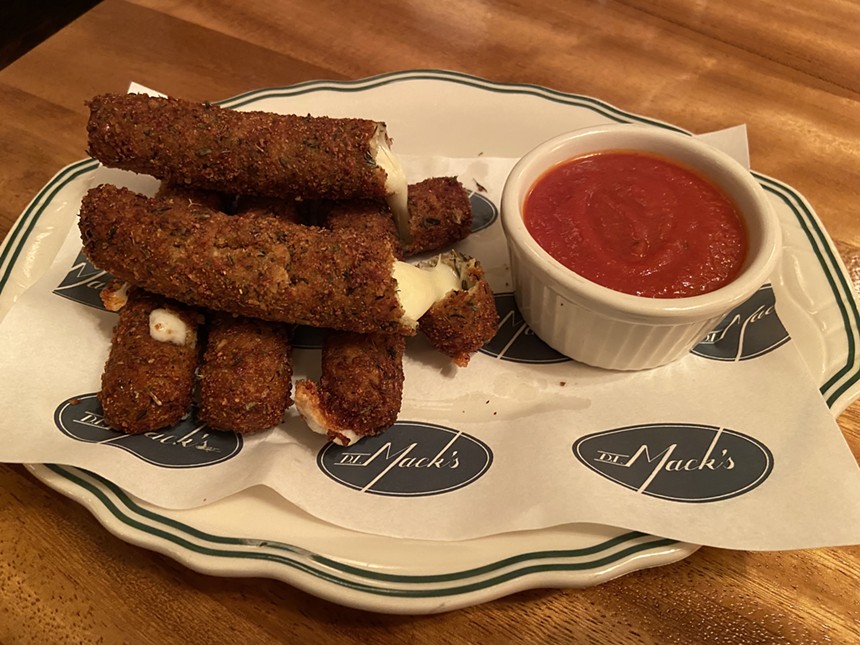 The mozzarella sticks at DL Mack's are highly recommended.
Amy Meyer
On the other hand, the mozzarella sticks came out perfectly ooey-gooey with a delicious Italian spice blend in every bite. The wings are fried and then thrown into the broiler, but instead of the extra step producing a crispy, crunchy skin, it sears them to a hearty char on the outside. They're moist on the inside, but the blackened skin left something to be desired.

The drink menu consists of beverages on the rocks, martinis and frozen cocktails made famous at their sister concept, Hudson House. There's a frozen Vandelay Bellini, advertised with strong amounts of vodka and signature Grand Marnier floater, but we opted for the frozen Paloma with tequila, fresh grapefruit juice, lime, Pamplemousse and agave. This one did not advertise copious amounts of alcohol, but it was loaded up while still going down smooth. The Añejo Old Fashioned, made with añejo tequila, Amaro Montenegro and sour cherry bitters, was a perfect companion to wash down the fried shareables. The Italian Sandwich at DL Mack's
Amy Meyer
For the main course, we had the Italian sandwich, topped with artisan charcuterie and fresh mozzarella, but the cherry pepper spread on top was most impressive. The sandwich is a good size and tasty, but without any sides, the $18 price point is a bit steep.

As for the star of the menu, Chicago cracker crust, tavern-style pizza, we went with the Harry Caray Special, with pepperoni, jalapeños and aji verde swirl, which is a Peruvian green sauce with cilantro, jalapeños, mayo and Parmesan. This pizza was very good, but if you had to rate it based on Chicago authenticity, the crust missed the mark. It was lacking that extra crispy, audible crunch with every bite that tavern-style crust is known for.

DL Mack's, 6501 Hillcrest Ave., 11 a.m. - 9 p.m. Sunday - Wednesday; 11 a.m. - 10 p.m. Thursday; 11 a.m. - 11 p.m. Friday - Saturday
KEEP THE DALLAS OBSERVER FREE... Since we started the Dallas Observer, it has been defined as the free, independent voice of Dallas, and we'd like to keep it that way. With local media under siege, it's more important than ever for us to rally support behind funding our local journalism. You can help by participating in our "I Support" program, allowing us to keep offering readers access to our incisive coverage of local news, food and culture with no paywalls.
Make a one-time donation today for as little as $1.