From Sichuan to Schnitzel, These Are the 8 Spiciest Dishes in Dallas 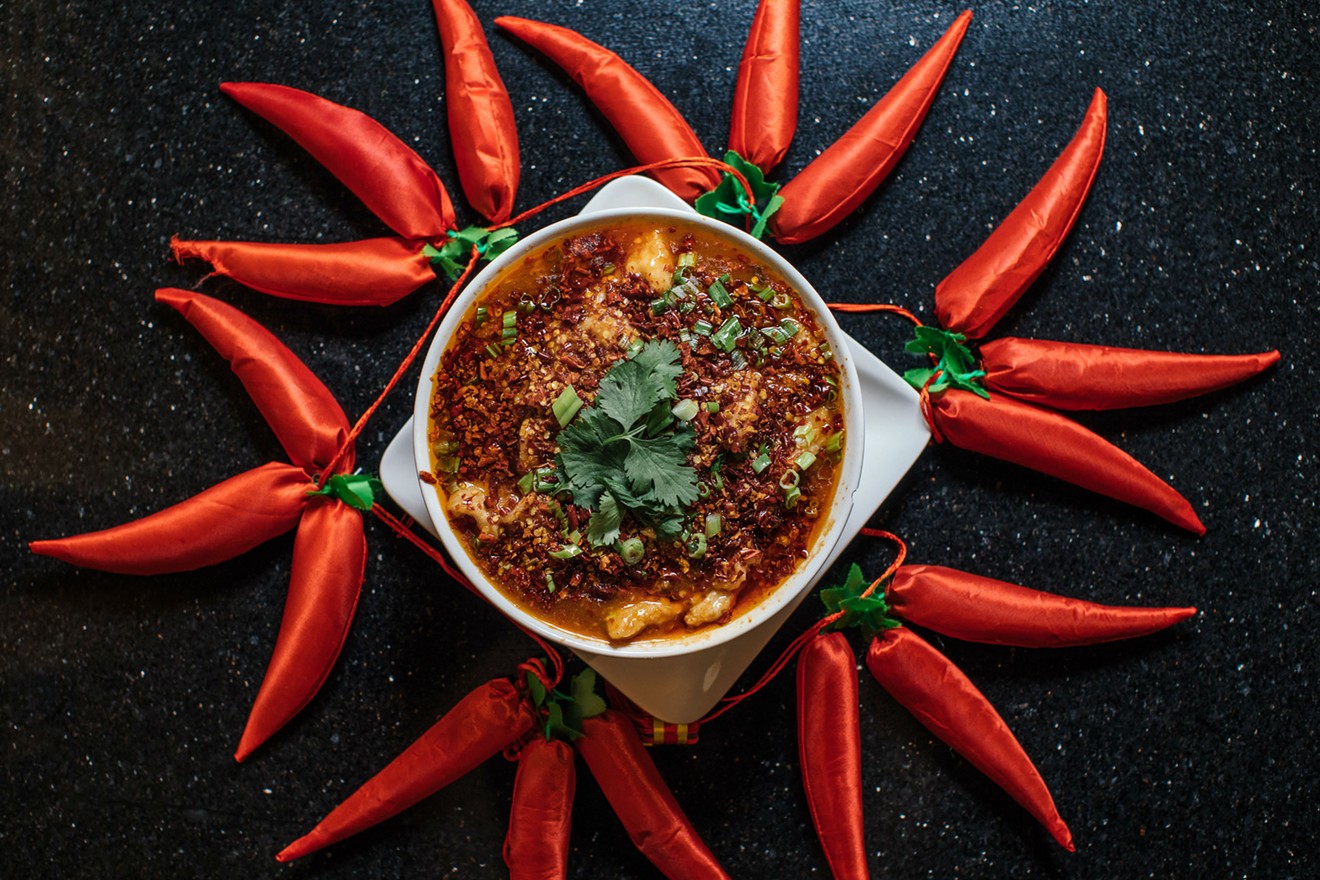 Royal Sichuan's Chongqing Chicken seriously deserves the little red chili icon placed next to the dish on the menu. Kathy Tran
While some might like it hot, some like it insane. There are daredevils out there who seek out dishes that are fearsomely spicy, with a heat that zaps like lightning and kicks like a bull. For those looking to go a few steps past insane in their culinary adventures, these dishes are for you. They're made with some of the hottest ingredients on the planet — by some of the most sadistic chefs in Dallas — and we bit the pepper-tipped bullet to track them down. Whether you occasionally get a little hotheaded or you’re a full-on heat freak, these are Dallas’ hottest dishes that are sure to make you sweat. We recommend a glass of milk and an ounce of bravery before digging in. Oni Ramen's Reaper Ramen (center) is not for the faint of stomach.
Kathy Tran
Reaper Ramen, $13
Oni Ramen, 2822 Elm St., Dallas, and 2801 W. Seventh St., Fort Worth
Fort Worth's Oni Ramen, which opened a new location in Deep Ellum last week, has a bowl and a challenge. Made with a "demon"-spiced miso broth, this ramen is difficult to finish in the best way possible. The ramen is made with tender pork belly, bamboo shoots, Parmesan buttered corn, bean sprouts, leek and, of course, a tender-centered egg. It's tasty, but what sets this ramen apart is the reaper sauce.

With a base of gojujang paste and spiced bean paste, aromatics such as garlic and ginger, Carolina reaper pepper, habanero pepper, Trinidad scorpion pepper and 7 Pot Brain Strain pepper, it’s got a laundry list of pain. While you can add the reaper sauce to whatever dish you’d like, it comes with the Reaper Ramen. The ramen is so hot, in fact, that chef Jesus Garcia offers a challenge: Eat his version of the Reaper, which clocks in about three times as hot, in less than 12 minutes without reaching for water. More than 100 people have tried, he says, and only about three have successfully completed it. Just one drop of DaLat's transcendental sauce will mess you up.
Kathy Tran
Transcendental sauce, free when added to a dish like pho, $9.95
DaLat Vietnamese, 2537 N. Fitzhugh Ave.
DaLat’s transcendental sauce couldn’t be a more apt word for the power it contains. Just one drop of the stuff is enough to send you into a different realm. Made from pure capsaicin, the chemical that makes hot food hot, it is applied to any dish of your choice (typically the flavorful pho) with a toothpick and a steady hand. Owner Khanh Nguyen didn’t like the route of having to add a heavy fistful of peppers to make his pho spicy enough for the insane spice-chasers; he felt it muddled the flavor of the broth. His solution was to use pure capsaicin, almost flavorless and packed with enough heat to burn bare skin. One drop makes a bowl weep with heat without changing the flavor. Nguyen puts it best: “It’s like having the best pho of your life while jumping out of an airplane.” This SpicyZest burger may not look all that tough, but it packs a punch.
Kathy Tran
Sri Lankan Spicy Burger, $6.50
SpicyZest, 13920 Josey Lane, Farmers Branch
Different cultures around the world have different versions of what they deem spicy. Tabasco may be hot to one person and mild to another. There seems to be no limit to a Sri Lankan’s heat preference, and SpicyZest’s burger is testament to that. Made with its house burger patty, pickles, a tangy sauce, two flatbread-style buns and a heaping piling of sautéed veggies and peppers, it’s a creative take on the classic. Tangy banana pepper leads the way, with an eye-watering crushed chili and bird’s eye pepper rings finishing every bite. It’s definitely a good choice to order a Sri Lankan milk tea to help along the way. This spicy sauce will make you see into the great beyond.
Kathy Tran
Afterlife Sauce, free but best with their dumplings, $7.50 each
Monkey King Noodle Co., 2933 Main St., Dallas, and 1309 S. Broadway St., Carrollton
Monkey King Noodle keeps things simple. It doesn’t add vinegar to hot sauce. It doesn’t dump in a truckload of sugar, onion, garlic or anything else, for that matter. It only uses ground peppers and water in its hottest sauce, the Afterlife Sauce. The peppers used are grown by a hot-head organic friend, so it's somewhat off-menu. Made with ghost pepper, Carolina reapers, habaneros, scotch bonnets, brain strain, chocolate bhutlah, jalapeños and apocalypse scorpion, it’s ruthless. Bright orange, pungent, ripping with flavor and off-the-charts hot, this is the kind of sauce that will take you out on a date and not call the next day.

next
KEEP THE DALLAS OBSERVER FREE... Since we started the Dallas Observer, it has been defined as the free, independent voice of Dallas, and we'd like to keep it that way. With local media under siege, it's more important than ever for us to rally support behind funding our local journalism. You can help by participating in our "I Support" program, allowing us to keep offering readers access to our incisive coverage of local news, food and culture with no paywalls.
Make a one-time donation today for as little as $1.
Daniel Rockey
Kathy Tran
Contact: Kathy Tran