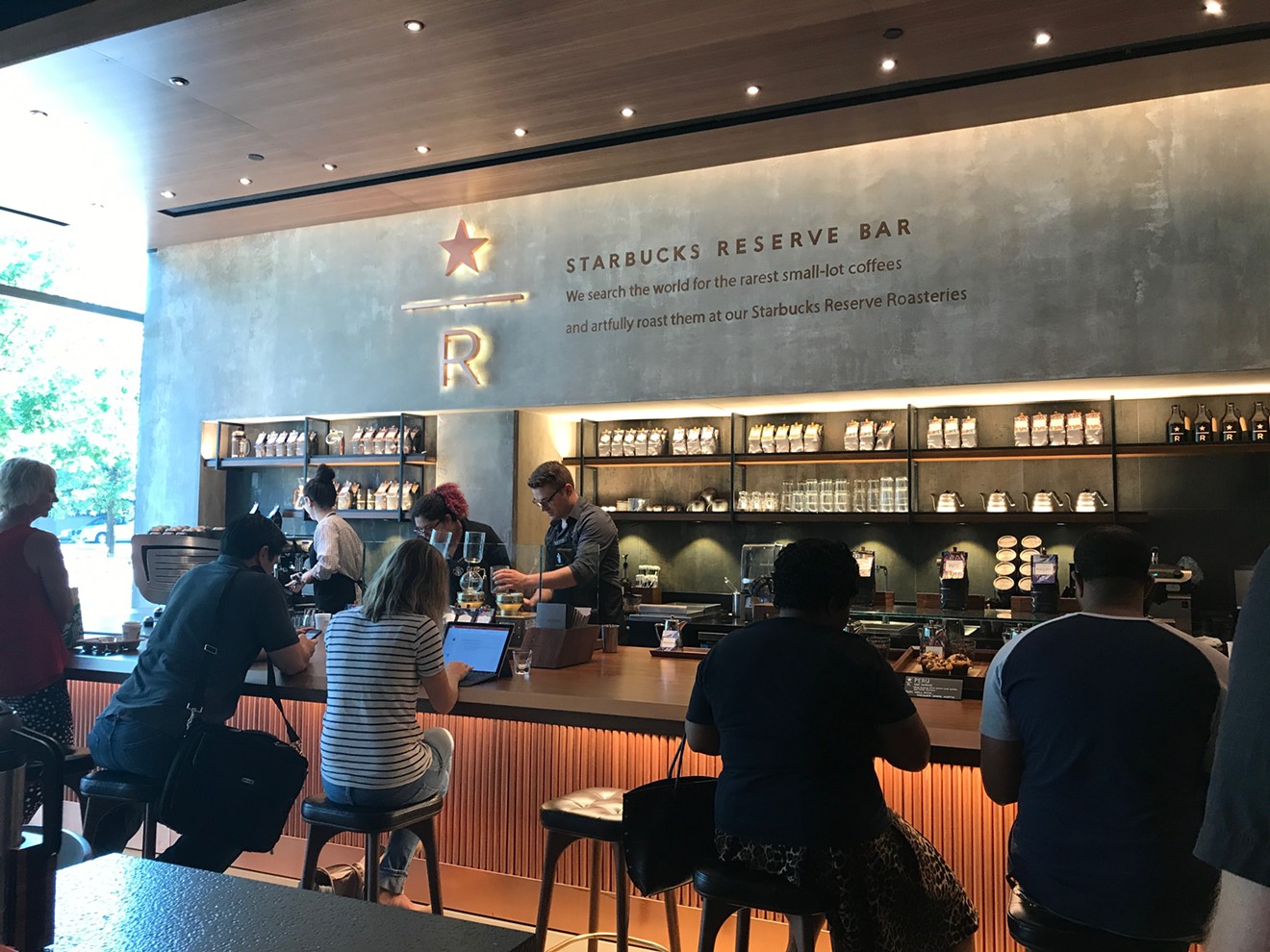 The new Starbucks Reserve Bar is in the McKinney Olive Building in Uptown. Beth Rankin
In 1971, Starbucks began as an independent whole-bean coffee retailer, and in the decades since, the brand has shaped the coffee industry in the United States — and the world — more than perhaps any other industry force. For years, the specialty coffee market grew along with — and because of — the growing footprint of the green giant. Starbucks started the second wave of coffee culture in the U.S., dominated the market with signature drinks like Frappuccinos and Caramel Macchiatos, and made customers see the value in spending $5 on a cup of coffee.

For years, countless other brands have chased in its footprint, trying (and failing) to beat Starbucks at its own game. Go to essentially any suburb, and you’ll find an independent shop or small chain of sterile drive-thrus slinging darkish roasted beans. In the last couple of years, however, the tides have been changing, and the third wave of coffee — comprising a mostly younger generation of quality-focused coffee folk — has steadily been stealing market share. Now, for the first time, we can see Goliath begin to model itself after David. 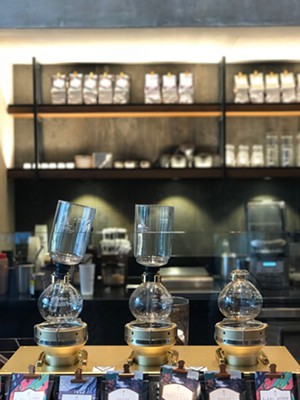 The new Starbucks Reserve in Uptown features brewing methods not available at standard Starbucks stores.
Beth Rankin
Starbucks opened the doors to its behemoth, 10,000-plus-square-foot Starbucks Reserve Roastery in Seattle in 2015. Its Black Eagle and ModBar espresso machines, the latte art and single-origin pour-over bar — plus the fact that its primary service bar looks like it was copied from Sightglass’ Seventh St. San Francisco cafe — made it clear that the company has been taking tips from the underdogs.

Since then, the brand has announced plans to repeat this concept in a couple dozen other locations around the world — including a four-story, 43,000-square-foot iteration in Chicago — and to open 1,000 “Reserve bars” worldwide by the end of 2017. These bars are less “Coffee Disneyland” than the aforementioned café-roasteries, but they still feature high-end equipment, signature drinks and brew methods not available at standard Starbucks stores, and the shops exclusively serve beans roasted under the brand’s Reserve line, which offers more traceable, higher-quality offerings than typical Starbucks beans.

Ultimately, the company plans for these Reserve bars to compose about 20 percent of its total locations, and last week, the newest Reserve location opened its doors Uptown at McKinney Avenue and Olive Street. The moment the door opens, it’s immediately clear that this is something very different from the other DFW Starbucks experiences. The design is modern and refined and feels more like the Ascension coffeehouse across the street than a Starbucks.

The coffees are better than at the average Starbucks, but they’re still a far cry from what you get at Dallas' best specialty coffee shops.

What is less immediately clear is where to order a coffee. On the far back wall is a bar for standard Starbucks offerings, including espressos, frappes, and the variety of lattes, teas and pastries you’d expect. Along the south side of the space is another bar, and this is where things are a little different.

First of all, the service style here is more like an actual bar in that you simply take a stool and let the barista know what you'd like. Single origin espressos, pour-overs and nitro cold-brew — including growler fills — are all on the menu. While you wait for your drink, you can view the beautifully packaged bags of Reserve beans lining the counter, each with a stylish card explaining the details of the specific coffees.

If you find yourself wondering how the various origin countries and processing methods mentioned on these cards affect the flavor of the coffees, flights are available to compare varieties of beans. If you find yourself confused watching the barista fuss with his or her siphon pot and halogen light heating system, brew method comparison flights are available as well. For those wishing to replicate these brew methods at home, educational brewing classes are soon to come. 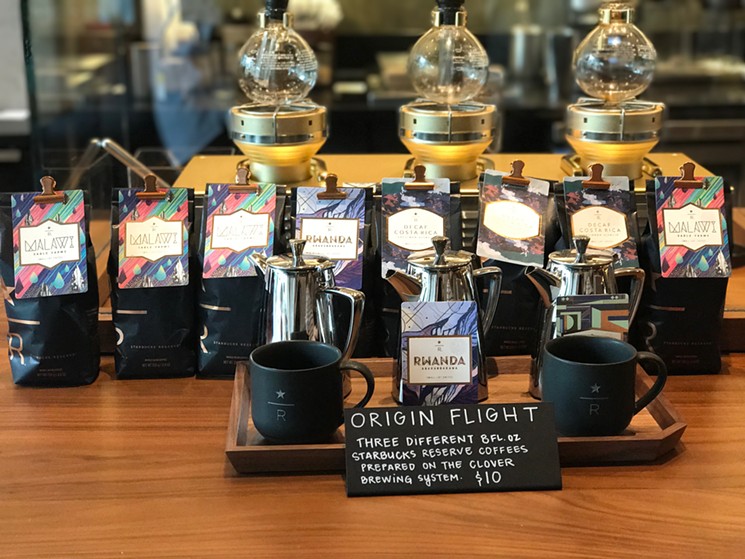 The packaging of the Reserve coffees makes it evident these are not your typical Starbucks coffees.
Beth Rankin
There’s no need to be hesitant to order any of the unfamiliar offerings, either, as the staff here is courteous, professional and free of pretense. During our visit, Wolfgang, the barista working the Reserve bar, thoroughly and accessibly explained the nuances of the different brew methods he was using to prepare a group’s flight of coffees. This level of engagement and customer education can be rare whether in a Starbucks or a high-end café. In general, the joyful attitudes and exceptional hospitality of the staff are standouts of the experience.

The coffees crossing the counter of this Reserve bar may be the least impressive element of the café. The coffees are better than at the average Starbucks, but they’re still a far cry from what you get at Dallas' best specialty coffee shops. The espressos and siphons are dialed in and prepared well — Wolfgang did all the right things preparing his siphon — but despite the terroirs described on the information cards, these coffees taste quite roasty. 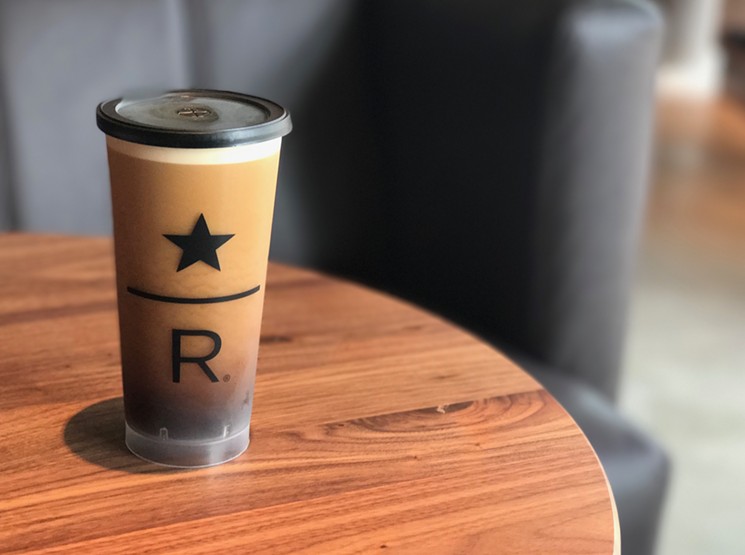 Nitro cold-brew is available on draught or in growlers to go.
Beth Rankin
The Malawi espresso is sweet, chocolatey and slightly earthy; the Rwandan coffee brewed up via the siphon has a creamy body and notes of dark chocolate and anise. They’re reasonably good but “clean” and “complex” are not adjectives that would describe them, and they are fairly bitter. For fans of cold brew, the nitro cold brew is decent, and frozen treats like the cold-brewed coffee malt are delicious ways to beat the summer heat.

That’s OK, though, because this isn’t a café for the coffee aficionado; it’s a café for the Starbucks drinker, and that’s really the best thing about these Reserve cafés. The same way Starbucks blazed a specialty coffee trail decades ago and made customers think about coffee in ways they never had before, it is utilizing its massive reach to elevate coffee for its guests again. The ways which it is doing this aren’t new — they’re things folks have been doing in independent cafés for years — but they are new to many Starbucks loyalists. Furthering the education and exposure to new coffee experiences will undoubtedly generate more interest and drive more consumers into the specialty sector.