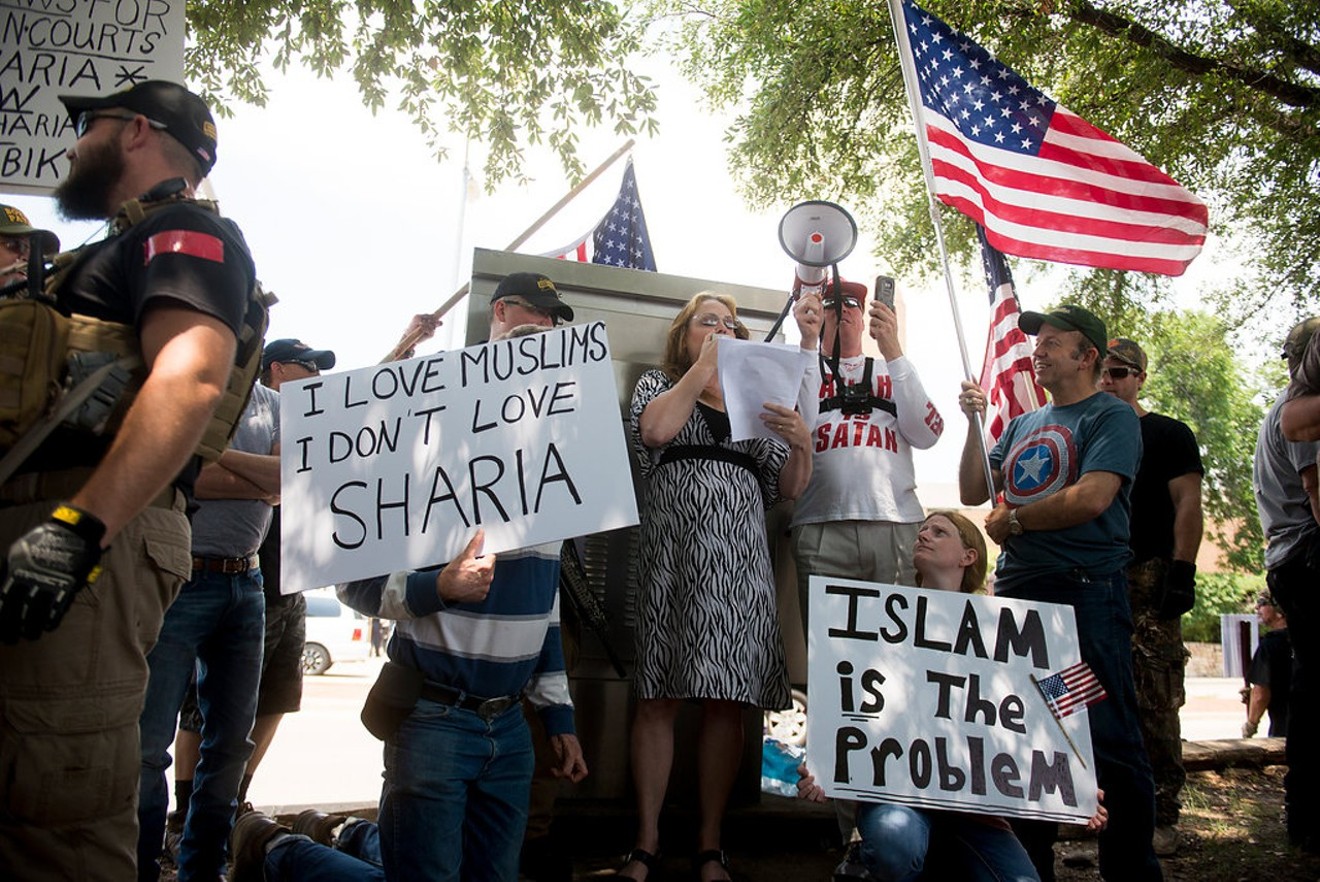 Protestors voiced their disapproval of Sharia – Islamic law – as well as other Islamic practices.  “When you look at the bare bones of how Sharia law is run and the courts are run, it’s trouble,” said Ross Ripy, an observer on the east side of Abrams Road. “Someone with a basic concept of inalienable rights should think like, ‘Oh, this is something I should oppose.’“

Demonstrators held signs in a march against Sharia.
Brian Maschino
The June 10 demonstration, representing the Dallas area, was one of 28 scheduled marches across the country hosted by ACT for America, a nonprofit that describes itself as “the NRA of national security. ” The Southern Poverty Law Center lists ACT as an anti-Muslim hate group.

Although initially organized by ACT, many participants on both sides fell in a wide spectrum of opinions. Some spoke of fighting against radicalized Islamic ideologies but others argue for the removal of all Muslims and Islam in “Christian America.”

Protecting the anti-Sharia protests, and as requested by ACT organizers, armed members of the Oath Keepers stood watch on the streets and alongside Richardson police officers. In addition to the Oath Keepers, members of the III% Security Force Militia – The Three Percenters – stood guard. Both groups are considered radical anti-government groups by SPLC.

Some who visited both sides of the street found varying degrees of misinformation and interpretations of each other’s sides.

“The anti-Muslim people infuriated me, because I think there’s a basic misunderstanding,” said Cecilia Hamilton, standing outside of the Islamic center. “There are passages in the Bible that you can quote and that are very violent, yet these people don’t follow them. It’s the same over here about the Quran.”

Participants conversed amongst themselves and some shouted back and forth across the street. Members of the Islamic center showed up to support and thank those defending their religion.  They also handed out water to those sweating under the midday sun.

Nora Shuaid hands out water to counterprotestors at the anti-Sharia march.
Brian Maschino
“What’s really happening here is very saddening,” said Nora Shuaid, a practicing Muslim who came to hand out water to counter-protestors. “We came to this Earth equal – the same father, the same mother. If we are ignorant and we listen to the devil, we go the other way in life.”

Although moments became tense as protestors visited each other’s sides and engaged in arguments over Islam and Sharia law, both sides left with the same opinions as when they came whether supportive or hostile.

“Just one thing: love thy neighbor,” Hamilton said. “That’s all.”