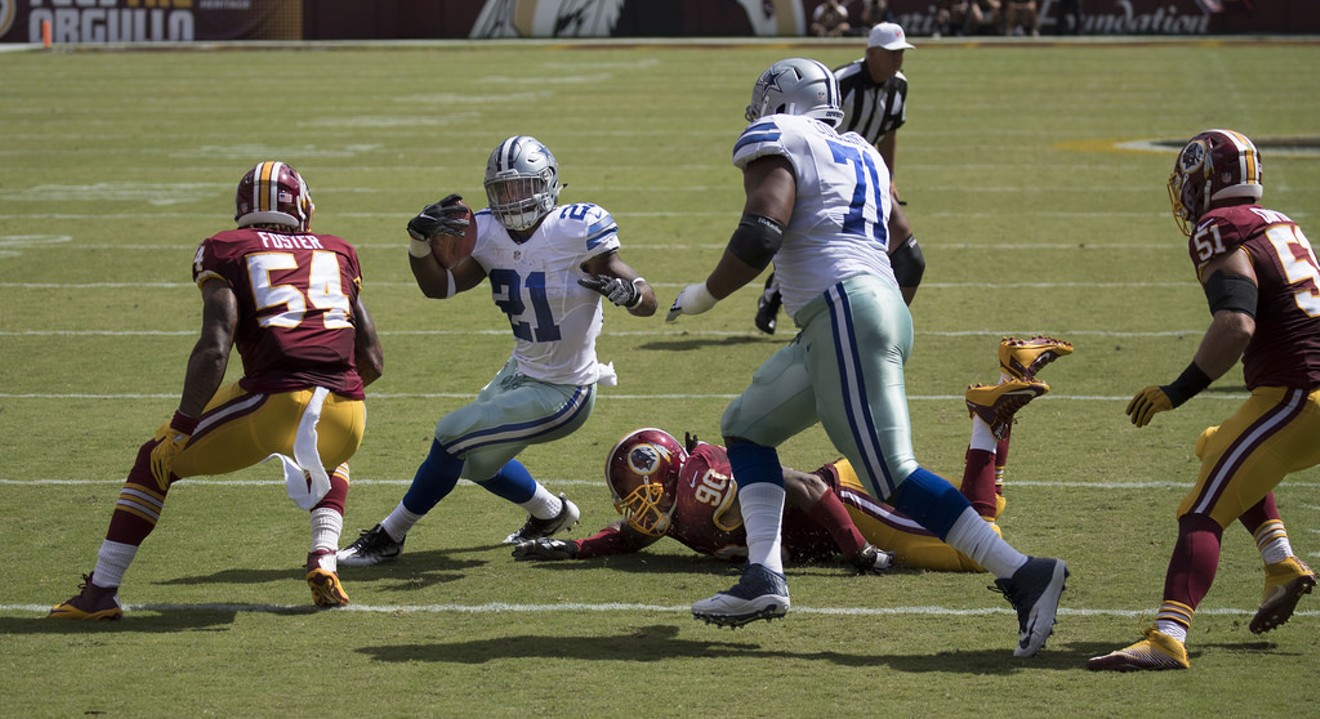 Ezekiel Elliott, the focus of the Redskins defense, is everyone's focus at Cowboys camp. Keith Allison
Barring a successful appeal, Dallas Cowboys running back Ezekiel Elliott is suspended for the first six games of the 2017 NFL season, the league announced Friday morning. Elliott's suspension, according to the league, stems from allegations of domestic violence made by his ex-girlfriend, Tiffany Thompson, in July 2016.

Thompson claims that during the week of July 16, 2016, Elliott physically attacked her multiple times, leaving her with bruises on her neck, legs and arms. The City Attorney's Office in Columbus, Ohio, declined to press charges against Elliott last year, citing conflicting witness statements that included text messages sent by Thompson to a friend asking the woman to lie about Elliott attacking her and information from witnesses who heard Thompson tell Elliott that she would ruin his life. Another witness said Thompson was likely injured in a bar fight, not by Elliott.

For the latest on the Elliott sage, check out our latest post: Here's Everything We Know About the NFL's Decision to Suspend Ezekiel Elliott

Despite the city attorney's decision, the league believes that there is "substantial and persuasive evidence supporting a finding that Elliott engaged in physical violence against Ms. Thompson on multiple occasions during the week of July 16, 2016," according to a letter sent to Elliott by Todd Jones, the NFL's special counsel for conduct.

During an NFL conference call Friday, NFL officials said the league considered both Thompson's allegations and a separate March 2017 incident in which Elliott pulled down a woman's shirt at Dallas'  St. Patrick's Day parade in their investigation.

A six-game suspension is standard for findings of domestic violence. Depending on a player's circumstances, suspensions can be made longer or shorter at the whim of NFL Commissioner Roger Goodell, who has the final say on all league disciplinary factors. Elliott has three days to appeal the decision. If he does, the league will make a decision on the appeal within 10 days after it's filed.

If Elliott serves the entire suspension, he will be eligible to return to the team Oct. 29, when the Cowboys travel to play the Redskins.