Don't bet on it. Mark Graham
Looks like the mayor loses this one. He has been maneuvering to stall the evictions of hundreds of poor families in West Dallas, probably hoping the hard hammer would not fall on these poor souls until after the May 6 City Council elections. But it will fall this week.

Khraish Khraish, proprietor with his father of HMK Ltd., has informed me that all of the remaining 150 families in the 300 houses originally threatened with eviction will be sent eviction notices this week.

Khraish said he and his father were boxed in, left with only two choices after a court hearing last week in which a protective injunction was not extended. He said he could have sold all of his 300 properties to a nonprofit of the mayor’s choosing – an outcome he and his father have vowed to resist from the beginning. Or he was legally compelled to evict all the remaining tenants to avoid penalties in the millions of dollars and possible criminal prosecution for maintaining substandard housing under new, stricter city codes.

In this black cloud over the families there is no silver lining – not even a glimmer – but at least there is this to be said for the evictions coming now instead of after the election: This way the true blame for this tragedy can be fully and publicly aired before the people of West Dallas vote.

In the crosshairs in that debate should be West Dallas City Council member and key mayoral ally Monica Alonzo, who has done nothing – not one thing – to protect her threatened constituents. Thanks to an infusion of cash from the Dallas Citizens Council, the Real Estate Council and high-end apartment developers such as Craig Hall, Alonzo has a huge fundraising edge in the election, but that money is stacked against considerable bitterness on the street for her indifference.

The mayor and the Dallas Citizens Council need Alonzo’s sold-out vote, as they need to get rid of council member Philip Kingston in East Dallas, in order to stave off a revolutionary shift of power on the City Council. That’s what the election is about, so, sadly for the threatened families, that’s what this story is about.

Remember how it started. The mayor called in the Khraishes, who operate a lot of rental property in the path of rapid gentrification in West Dallas. He asked them if they might be interested in selling their land. They said no. 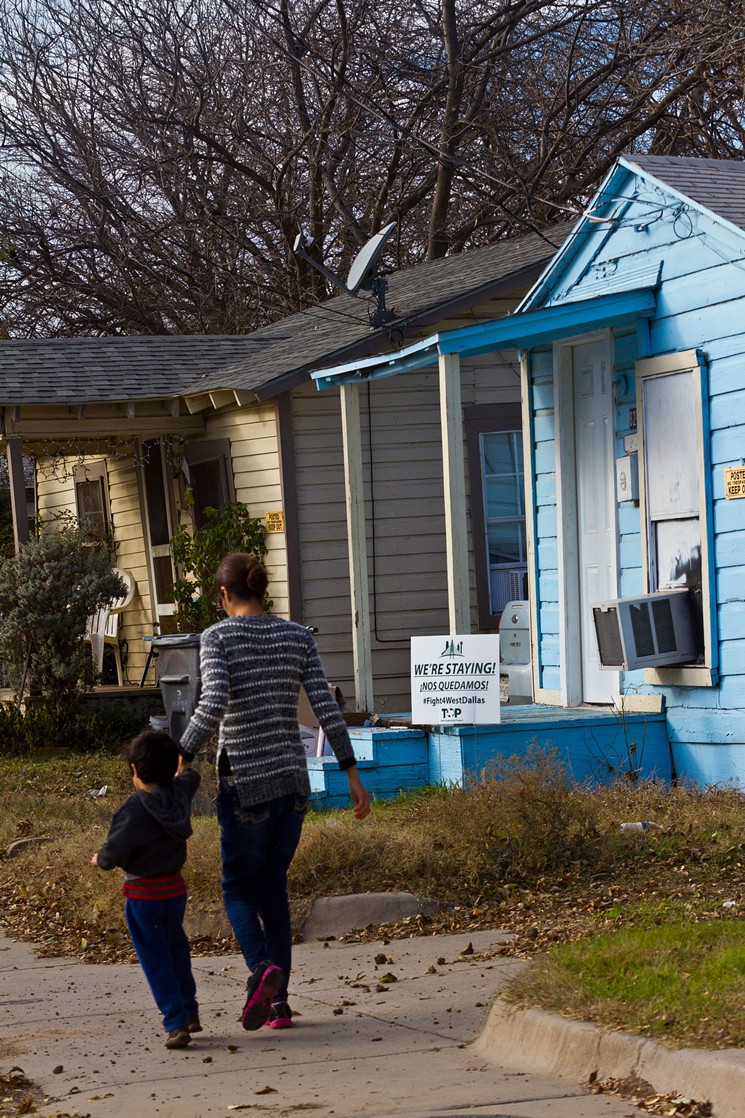 Stricter city codes spelled the end of low-rent houses like this on Nomas Street.
Mark Graham
For a decade HMK had been charging some of the lowest rents in the city for single family residential properties while also maintaining a good history on code violations. That means they kept their properties up to the legal standards.

But the mayor and the council last year voted in a tougher rental ordinance. The Khraishes took a long careful look at the new standards and decided their business model was no longer viable. The Khraishes didn’t want to operate their properties in violation of the new law. The standards demanded a level of investment they didn’t believe they could recoup at the low end of the rental market.

There was another big factor. Under the city’s new law, the Khraishes stood to be fined $300,000 a day and subjected to criminal prosecution if they continued to operate one single day in violation of the standards. They threw in the towel.

But under Texas law, there is a protection for landlords who don’t want to get banged with code violations and other penalties while emptying their properties of tenants. A landlord with a property that doesn’t meet code can declare that he is taking that property off the rental market at the expiration of existing leases. The law gives him six months to either bring the property up to code or demolish it, protecting him from prosecution during that time.

The new Dallas ordinance is much more restrictive. It says the only thing a landlord in the Khraishes’ position can do is sell the property to a nonprofit. From the beginning of the Khraish saga at City Hall, the mayor and the city attorney seem to have been operating on the assumption that the Dallas rule rules.

The Khraishes maintain that City Hall’s legal position is upside down, wrong and not too smart. They say the Dallas ordinance is merely an add-on to state law, which it cannot contradict or overrule. They have a right under state law, they say, to take their nonconforming properties off the rental market, knock down the bad houses and redevelop the land themselves, which they plan to do.

It’s that part – their keeping their own land and redeveloping it themselves – that seems to arouse Mayor Mike Rawlings’ greatest ire. In a recent conversation, he spoke heatedly to me about what he saw as Khraish’s stubborn refusal to even consider selling the 300 small houses that he is attempting to take off the rental market: “Now, I know he wants more than I think they’re worth, but that’s the marketplace talking. I didn’t know he had shut it off and said NFW.”

A view from condominiums going up on Singleton Boulevard in West Dallas.
Mark Graham
NFW is a polite abbreviation. Actually, in the many months I have been talking to Khraish, he has said NFW from the very beginning. He has never indicated that he wanted to sell his land. I have never heard anything but NFW.

I spoke with a person who has experience purchasing large numbers of parcels of land. I was seeking advice on the right way to do this. He spoke to me in exchange for my agreement not to name him. He said the key to buying hundreds of properties from someone like Khraish begins with recognizing that he doesn’t want to sell, never said he wanted to sell and isn’t especially interested in talking about selling. Oh, and also: This is America.

The city is trying to bully the Khraishes into selling, using the new rental standards ordinance as a stick.


He said if he were trying to do it, he would send Khraish a letter saying, “I want to buy a bunch of property from you. The fewest properties I will buy is XX, and the greatest number is XX. The lowest price I will pay per property is XX, and the highest price I will pay is XX. If you will sign a memorandum of understanding with me, I will show you my money. If you like the deal, you and I will go to the title company of your choice, and I will put down earnest money to be negotiated.”

In other words, talk him into it. Instead, the city is trying to bully the Khraishes into selling, using the new rental standards ordinance as a stick. And, if the Khraishes are right, the city has even that wrong.

Robert Caro’s book about New York master-builder Robert Moses was called The Power Broker. If I ever write one about this, I plan to call it The Power Joker.

Rawlings told me he had all kinds of city programs at hand that he could use to bring the threatened 300 properties up to code and also transform the $350 to $450 a month rent-payers, many of whom are not documented citizens, into fully mortgaged homeowners. Two weekends ago many of Khraish’s renters turned up with hope in their eyes at a homeownership fair put on by the city, having been told by someone that Khraish was going to sell their houses to them.

But they had no money. Khraish told me he found the manipulation of his tenants “heartbreaking” and demanded that community activists present at the event stop telling his tenants he was going to sell them his houses.

I asked mayoral spokesman Scott Goldstein a week ago how many home owners were created at the event. I am still waiting for that answer.

In fact, the plight of these 300 families has spawned a feeding frenzy in the local poverty pimp industry. With much fanfare several weeks ago, the mayor announced he was giving $300,000 in taxpayer money to Catholic Charities of Dallas to assist in “relocation.”

Catholic Charities Director David Woodyard has ignored my repeated inquiries as to whether he has relocated a single family or at least plans to give the money back if he doesn’t relocate anybody. I think that’s probably a no and a no, which is pretty good pimpin’.

Right now, the HMK Khraish situation is frozen in abeyance under a court injunction won by the city. To get the injunction, the city had to agree not to bring any enforcement action against HMK in exchange for HMK’s agreement not to evict any tenants before June 3.

Goldstein did tell me that Assistant City Attorney Melissa Miles appeared at a hearing on a possible extension of the injunction last week. Miles, he said, talked to the judge about the city’s desire to see the Khraish properties sold to a nonprofit.

In his email to me, Goldstein said, “At the hearing, [Miles] informed the court of that possibility and the fact that, thus far, HMK has not been receptive to any proposal that does not involve HMK retaining and demolishing all of the remaining houses in West Dallas to further his own redevelopment plans.”

Yes. As he has said from the beginning. And then there is the other thing: This is still America. As of last week, anyway.

The injunction was not extended. That meant one thing and one thing only for Khraish. He either evicts, or on June 3, when the injunction expires, he becomes lethally legally exposed, under both the state and local rules.

He informed me yesterday that he will move this week to evict all 150 of the remaining families in his small West Dallas houses. The other 150 are gone already under their own steam, apparently with no money in their pockets from Catholic Charities.

Between now and May 6, Alonzo can stand before her voters and tell them every single thing she did to protect these families. That should take about six seconds.