A new art and history exhibit from the Smithsonian Institute called Men of Change that celebrates African American men is now open at the African American Museum of Dallas in Fair Park. Danny Gallagher
CORRECTION, July 27: The original version of this story misidentified the artist who created the portrait of Kehinde Wiley and misspelled Wiley's name. Devin Shimoyama painted the image of Wiley. We apologize for the errors.

Artist Patrick Earl Hammie says the opportunity given to him by the Smithsonian Institute to display his portrait of prominent African American artist Romare Bearden wasn't just a chance to showcase his talent in its new touring exhibit. It's also an opportunity to show who he is as a person.

"I really enjoyed how the Smithsonian created a visual platform for artists like myself and the other 25 but also to come together," says Hammie, who's from Champaign, Illinois. "I remember the opening in Cincinnati, nine of us were able to make the first showing, and something I'd like to underline is how magical that was, to come together to celebrate these men and the extended community that celebrated these men."

The African American Museum of Dallas in Fair Park is hosting a new interactive art and history exhibition called Men of Change that celebrates and analyzes the influences and contributions of famous and iconic African American men. The exhibit will run until Sept. 12.


Phillip Collins, the guest curator of the exhibit and the vice-chairman of the Dallas Arts and Culture Advisory Commission, says the Smithsonian conducted a survey to find the most revolutionary and influential African American men who shaped their times through their lives. Choosing the right names for the exhibit was no small task.

"This exhibit is about bringing the African American male out of the darkness and into the light," Collins says. "It is very engaging to see what is happening to us when we get into the light."

Each of the 38 men was paired with an artist to commission a portrait, sculpture or other work of art based on their likeness. Each wing of the exhibit examines these influential men through different facets including storytellers, myth-breakers, fathering, community, imaging and catalysts. The project produced some vivid, moving and thought-provoking pieces that celebrate men's work for change. Among them are comedian and civil rights champion Dick Gregory, NBA star LeBron James and NASA administrator Charles Bolden. The exhibits also include spotlights on men whose personal lives sparked greater awareness of harsh realities such as Emmett Till, a 14-year-old boy lynched in Mississippi in 1955, and Trayvon Martin, an unarmed 17-year-old Floridian shot dead in 2012 by a neighborhood watch member. 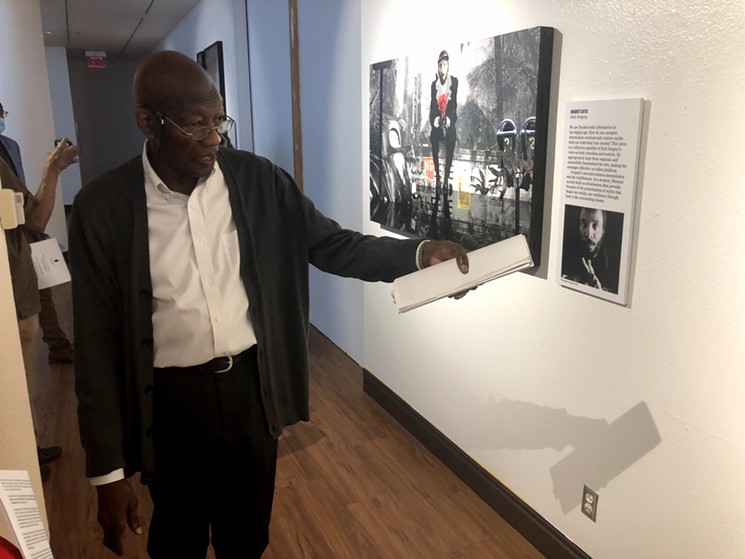 Phillip Collins, the guest curator of the Smithsonian's Men of Change exhibit and the vice-chairman of the Dallas Arts and Culture Advisory Commission, takes guests through the artworks celebrating the influences and changes made by African American Men at the African American Museum of Dallas.
Danny Gallagher
The exhibition not only aimed to bring greater awareness to the influences of these men on visitors' lives but also to the artists painting their portraits.

"The interesting thing about the artists is they were able to select which one they wanted because we wanted them to align themselves with the man who has similar agendas with their art," Collins says.

Hammie's portrait of Bearden, a key contributor to the Harlem Renaissance art movement whose work appeared on the covers of some of the nation's most widely read magazines, is a "visual collage" of the artist's face. It mimics Bearden's art in use of pieces of his life to tell bracing and uncomfortable truths, and Hammie says he saw deep influences in Bearden's work in the others participating in the exhibit.

"I saw very direct lines from [Bearden] to them and other people in the show, and I could see the artistic approach they have is much more similar to him," Hammie says. "I was surprised, but that's an opportunity. It's a less expected direction to find a way of meditating on Bearden."

Hammie says the experience of creating the portraits and seeing people's personal and visceral reactions to them instilled a great sense of hope in him about the exhibit's mission.

"It was rejuvenating," Hammie says. "It felt special. It felt that we were being seen. There's a potential this show has to move through the country and create sparks of new stories to remember."
KEEP THE DALLAS OBSERVER FREE... Since we started the Dallas Observer, it has been defined as the free, independent voice of Dallas, and we'd like to keep it that way. With local media under siege, it's more important than ever for us to rally support behind funding our local journalism. You can help by participating in our "I Support" program, allowing us to keep offering readers access to our incisive coverage of local news, food and culture with no paywalls.
Make a one-time donation today for as little as $1.