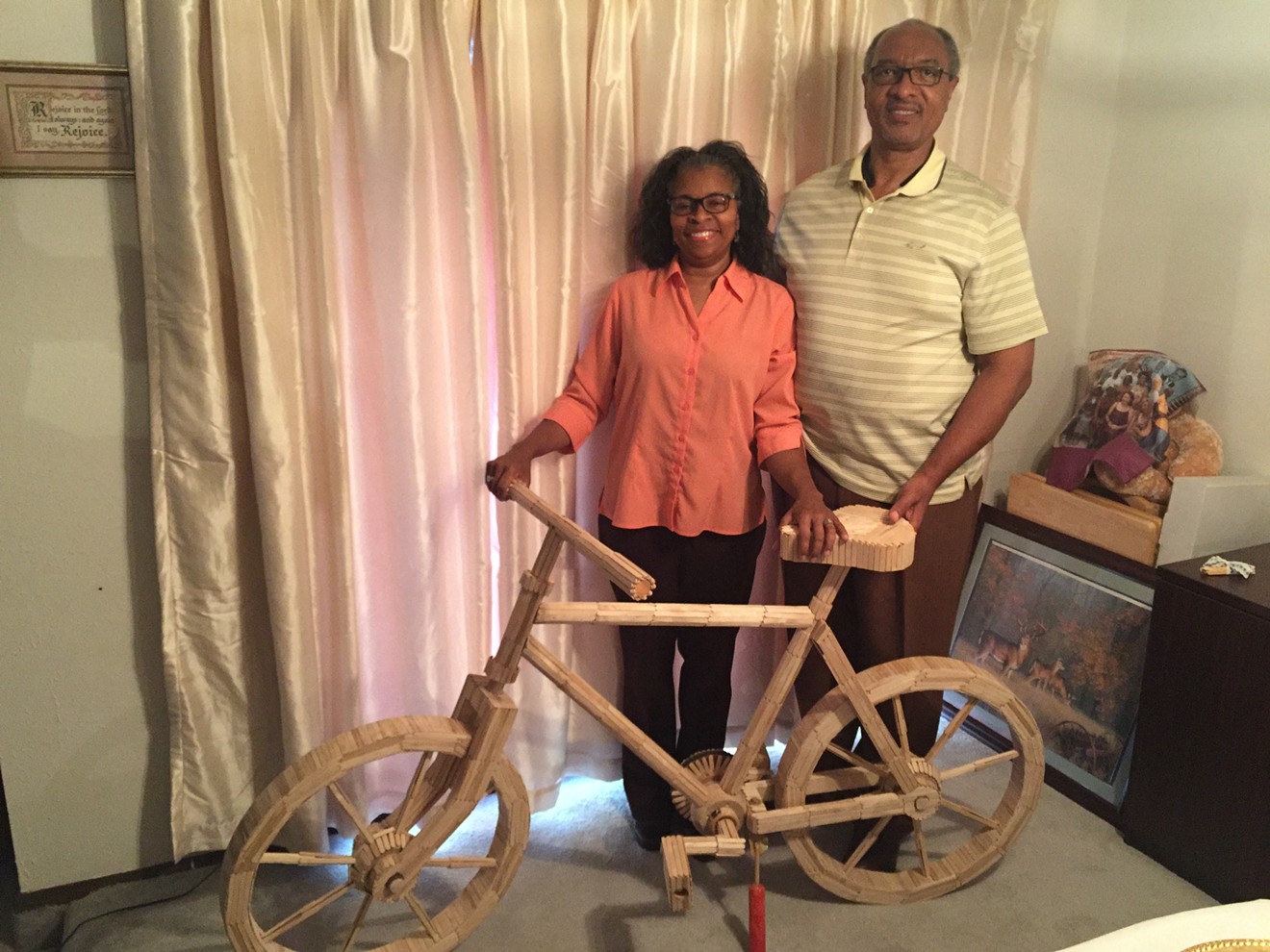 Melinda and Larry Gardner of Carrollton received a bicycle made out of popsicle sticks from talk show host Jimmy Kimmel. Photo by Danny Gallagher

Melinda and Larry Gardner of Carrollton received a bicycle made out of popsicle sticks from talk show host Jimmy Kimmel.
Photo by Danny Gallagher
The internet doesn't just love failure. It craves it. It needs it. Failure is the internet's opioid.

Melinda and Larry Gardner found themselves pinned to the internet's dartboard following their recent appearance on the long-running, wheel-spinning, phrase-guessing game show Wheel of Fortune.

Overall, the couple's game show performance was good, but there was one minor snafu: Melinda blurted out the answer "Popsicle Bike" instead of "Honeysuckle Bush" during an early toss-up round. The puzzle was categorized as a "Living Thing."

After that early flub, the Gardners made short work of the spins and puzzles in front of them, ultimately taking home $17,000 in cash and prizes, including a trip to Disneyland. And the goofy mistake, combined with their bubbly personalities, earned them a pleasant 15-plus minutes of fame to boot.

"In my earlier years, I could not laugh at myself," Melinda, who works as a health benefits counselor, says. "So this was, like, huge. If not, I'd be under a rock."

The Gardners flew to Culver City, California, last August with their daughter Keisha Green and son-in-law Darren to shoot the episode, which aired for the first time last month.

"I don't know what I was saying," Melinda says of the mistake. "Maybe it's because I saw a 'K' at the bottom, but I'm like OK, let's move on. So I didn't think about it, but my daughter's like, 'That's gonna go all over.'"

Keisha was right. A Wheel of Fortune watcher recorded Melinda's bizarre answer and posted it on YouTube.

The clip went viral, alongside other moments from the game show, which has turned contestants into memes like Lolita "Self-Potato" McAuley, Julian "A-chill-is" Batts, and Kevin "A Streetcar Naked Desire" Haas, who was the most recent Wheel of Fortune laughingstock until the Gardners.

The Gardners' journey to Wheel of Fortune started last year when the show's "Wheel Mobile" came to town to audition contestants. Melinda says she went with a friend to try out for the show and received an email from the casting department calling her and her husband back to audition for a special Grandparents Week of episodes.


It can take up to 18 months for contestants to find out if they have been selected for the show, but Larry says they got the call only two weeks after their second audition.

"Oh my gosh, it still didn't seem real," Larry says about learning that he and his wife would be on a show they've recorded and watched every week since they bought their first DVR. "I still didn't believe it was gonna happen."

The episode didn't make it to the airwaves for another eight months and the Gardners couldn't tell anyone the outcome because of  contractual agreements with the show.

The Gardners didn't learn until the following morning that Melinda's moment was blowing up on the internet. Larry says he received a text message that his wife was on The Tonight Show with Jimmy Fallon.

When Melinda jumped on her computer, she saw the clip was also being joked about on Ellen and Good Morning America. Later that day, the Gardners received an email from Sony Pictures, the studio that syndicates Wheel of Fortune, asking if they would like to appear on Jimmy Kimmel Live.

Melinda was surprised to see the moment gaining so much traction.

"A lot of our friends said they didn't even notice it," she says. "If we didn't go to the bonus round, we may have noticed it more."

Kimmel not only interviewed the couple live from their living room, but he also presented them with another prize that Kimmel's sidekick Guillermo wheeled out on stage: a full-size, one-speed bicycle made entirely out of popsicle sticks.

The gift was more than just a funny prop for a late-night gag. The show actually shipped the bike to the Gardners' home in Carrollton, where it sits on display in their dining room.

"I couldn't tell how big it was because Guillmero was so short," Melinda says with a laugh. "I talked to the producers several times after that and they always said, 'We're going to send it to you.'"

The appearance on Jimmy Kimmel's show added more fuel to the viral flame. Afterward the Gardners received several messages and texts from TV and radio stations asking if they've like to be interviewed on various shows, and they even received a tweet from Popsicle with an offer for a palette of Popsicle products.

The massive shipment of frozen treats hasn't arrived yet, but when it does, the Gardners say they plan to donate them to a worthy charity.

The spotlight on the Gardners has dimmed a little since last month, but Larry says they still get recognized and it always sparks an interesting conversation.

"Almost every day, I get hit up by somebody who says, 'Hey, I saw you on Wheel of Fortune or Jimmy Kimmel,'" he says.