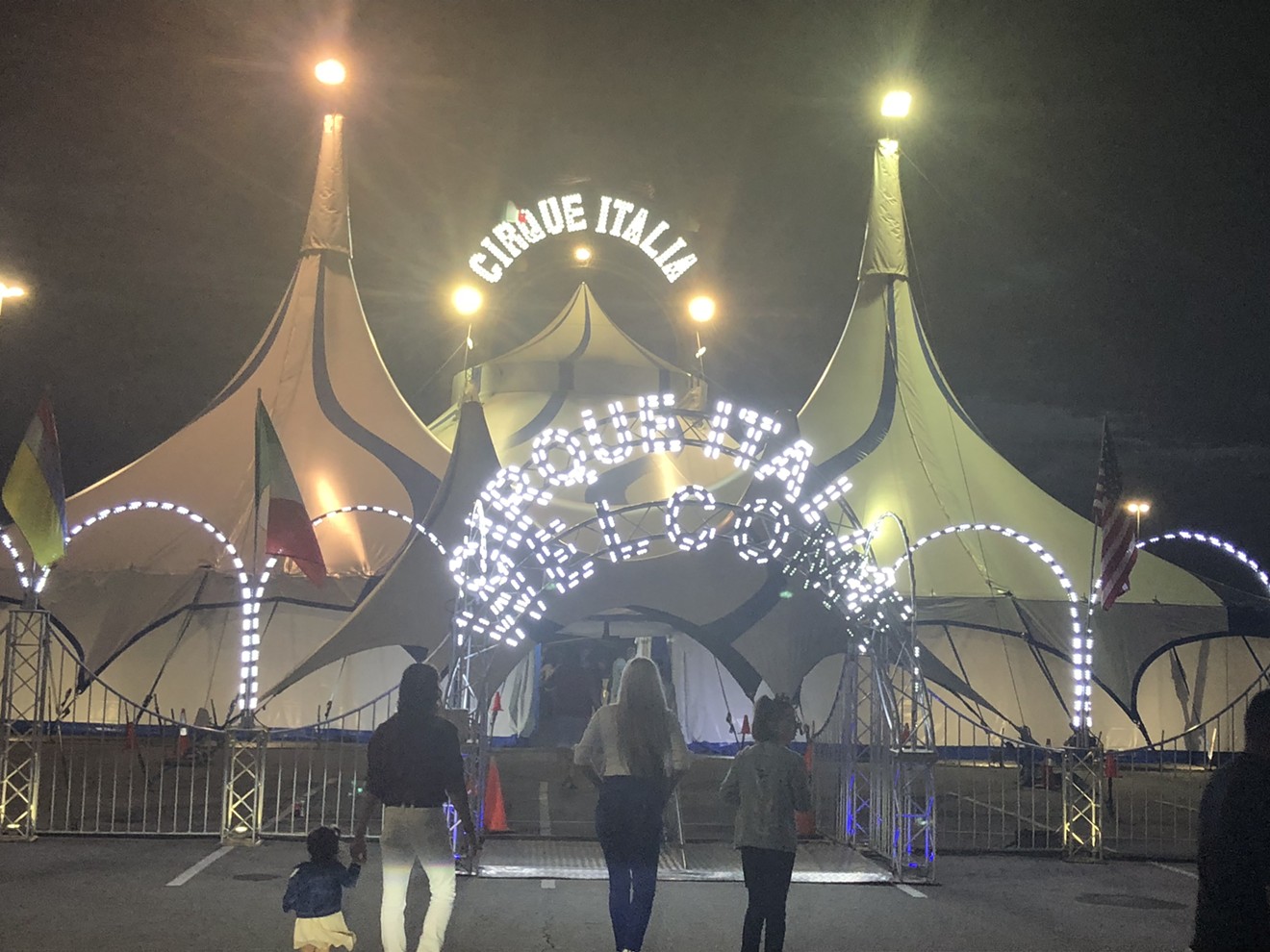 Don't expect water in this mall parking lot. Brad LaCour
When you sit down to watch Cirque Italia’s Water Circus, you can’t help but be filled with questions. What is a water circus? Do the performers act out impossible feats submerged in a tank of water? Can you tame a lion underwater? What would a lion look like with a snorkel in its mouth?

As you politely shake your head at the popcorn vendor and get comfortable in your seat, your eyes rest on a large, circular, dry stage. Of course, that’s completely fine — stages are meant to be dry, and water will inevitably make an appearance. It’s a water circus, after all. The lights dim, everyone in the phone-holding audience ignores announcements forbidding recording and Coco the clown, the master of ceremonies for the evening, runs to the stage.

The clown in any circus is meant to be the entertainment between acts, a palate cleanser designed to keep the audience engaged and distracted while the crew rushes to set up for the next performer. Coco does his job well in this regard, frequently making the crowd laugh as he jumps from seat to seat, playing games with children and adults alike. The fact that Coco draws the focus is a testament to his skill; multiple times, crew members frantically rush to set up complicated rigging directly behind him.

It’s not until about three acts in, when Juliette Carballo, a 17-year-old contortionist, is suspended from the ceiling inside a plexiglass ball that Cirque Italia introduces the water. As the ball rises, a portion of the stage lifts to the top of the tent, revealing a steady waterfall from the platform’s underside. A moat now exists where the stage once was. Two fountains shoot water into the air around the ball as Carballo dangles with no safety. It’s a dangerous stunt with beautiful imagery, and it's essentially all the water you will see in the water circus.

That’s not to say any of Cirque Italia’s show is bad — because it’s not. Throughout the hour and a half, you’ll see bicycle tricks, choreographed aerial performances, an increasingly difficult juggling routine and a high-wire act performed without a net. You will literally hold your breath until Alberto Castillo Parrera finishes his last swing on the aptly named Wheel of Death. The performers are well trained and talented at what they do — their showmanship and skills are worth the price of admission, water or no water.

But the company's name and advertising of a water circus, invites comparisons to Cirque du Soleil and its long-running show “O.” The two shows are not in the same category, nor does it seem like that’s what Cirque Italia is striving to be. Cirque Italia marries the classic tradition of Ringling Bros. and Barnum & Bailey Circus (minus the animal cruelty — no lions with snorkels in sight) with a European artistic sensibility. Also add in funnel cake; if you set up a business in a mall parking lot, you have to sell it.

If what you’re looking for is an aquatic show, SeaWorld is somehow still open. But if you want to see a classic circus with a twist, check out Cirque Italia for its upcoming final weekend in Grapevine.