How to Publish a Book, With Deep Vellum’s Will Evans 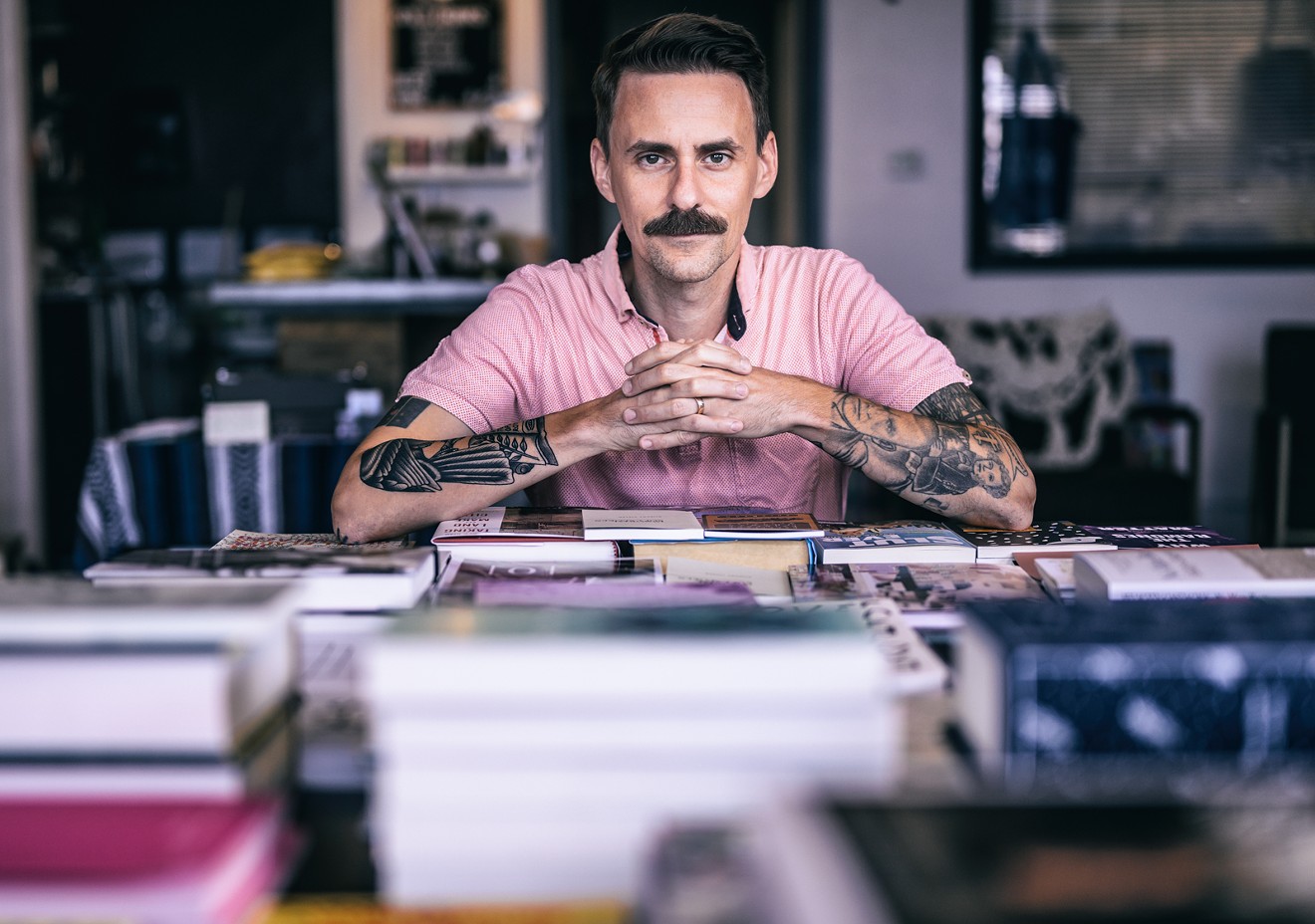 One of those books could be yours one day, if you listen to Will Evans' advice. Mike Brooks
The year was 2015, and America was having a conversation about gender. In Dallas, the emergent press Deep Vellum Publishing partnered with a French author to publish a book all about that very topic. The catch: author Anne Garréta’s book Sphinx first hit shelves in 1986.

“It was kind of a perfect storm,” Deep Vellum director Will Evans says. “The timing was perfect. But the thing I’m most proud of is getting Anne in front of new readers.”

The first thing you notice about Evans is his calm, amicable demeanor — a trait that undoubtedly makes him popular among writers anxious about presenting their work to the masses. Sporting a mustache that looks effortless yet perfectly manicured and boasting a collection of tattoos that give him automatic artist cred, Evans has the allure of a man who is comfortable in a boardroom and a writer’s room.

As the owner of Deep Vellum Books and executive director of Deep Vellum Publishing, Evans is immersed in Dallas literature. For the last six years, he and his publishing team have partnered with international authors to produce English translations and introduce them to American audiences. Yet while his literary collaborations extend across the globe, Evans is deeply invested in local literature.

“There’s an art side to literature and there’s a business side, and not everyone has access to the business side,” he says. “That’s one of the reasons I started a publishing house in Dallas, because there was no one doing literary work here, and I think it’s valuable to have that access in every community.”

Deep Vellum Books frequently spotlights local writers, and Evans’ publishing house is passionate about connecting readers to talented writers in need of an audience. Evans is eager to share his wisdom about how to get published.

“The first thing you have to do is figure out what story you’re telling,” he says. Luckily, Dallas writers are not alone. The publisher points to groups like Writing Workshop Dallas for examples of the local community of writers, and according to Evans, everything from nonfiction to sci-fi is prevalent in Dallas. “Whether you want to write a kid’s book or a cookbook, you have people here ready to help you advance your craft. So before you go anywhere else, decide what you love to write, get your work in front of other writers.”

As a publisher, Evans looks for creative vision. Writers have to be talented and have to have a clear definition of what their work is and where they want to take their craft. At the same time, he harbors no illusions about the realities of publishing.


“If you’re a writer, the artistic side of literature may come naturally to you, but you still have to be able to talk about your work as a product.” — Will Evans

“Just like anything else, literature is an art and a commercial activity,” he says. “If you’re a writer, the artistic side of literature may come naturally to you, but you still have to be able to talk about your work as a product.”

That’s where an agent comes in. Evans emphasizes that the role of an agent can be crucial to a writer’s success, particularly if they hope to land with a major publisher. An agent can help you pitch your work, and be your representative on the front lines as you seek an audience for your creation.

“The bigger the publishing house, the less likely they are to work directly with artists. If I’m at Penguin Random House and I get a manuscript from a writer, it’s probably going in the recycling bin.”

Smaller houses like Deep Vellum have no problem working directly with writers. Writers without an agent can submit directly to smaller presses, and even partner with them to publish their work and gain representation. That is how Evans’ press connected with Garréta. The publisher learned about the French writer through a friend, and the Deep Vellum team, then just two years into their existence, was passionate about introducing Sphinx to an American audience. The book made waves in France upon its late-1980s publication, primarily because of the way it played with gender. French is a gendered language, with rigid gender rules embedded in its grammatical structure. Sphinx turns the typical on its head by depicting an erotic, passionate romance where there are no gender markers between the two principal characters.

“We publish it 29 years after it first comes out, and it becomes part of a much larger conversation about what gender means, what gender pronouns mean and what identity means,” Evans says.

The book was reviewed in The Huffington Post, the London Review of Books, but the most impactful praise came from Pentatonix singer and Arlington native Mitch Grassi. Grassi tweeted about the book, skyrocketing Sphinx into Amazon’s top 100 best-sellers and helping it sell out in its first run.

“After all of that, Anne starts writing again,” Evans says. “She hadn’t written a book in years, and the success of Sphinx recaptures her love of the craft. That’s why we do what we do.”

More recently, Deep Vellum has partnered with Denton author Fozia Karimi, a yet-to-be-published writer they connected with via an agent.

“At the end of the day, we just want to get great books in front of as many people as possible,” Evans says. “And because there are 400,000 books published every year in America, odds are you’re going to have to keep publishing to get where you want to be.” 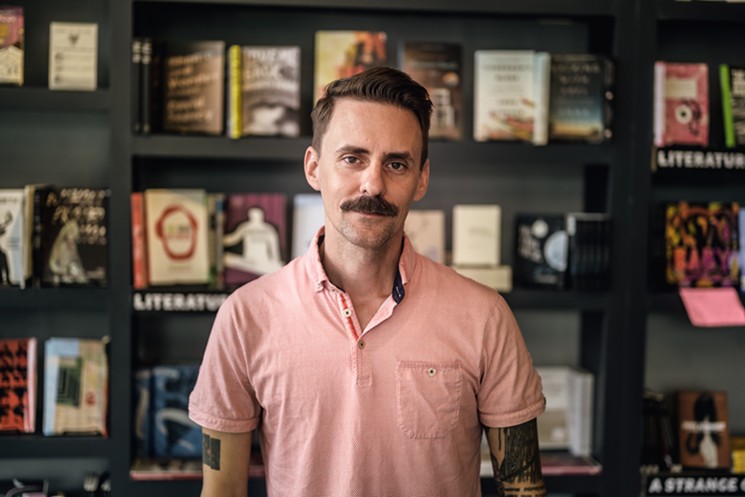 Deep Vellum's Will Evans is a man of letters.
Mike Brooks
KEEP THE DALLAS OBSERVER FREE... Since we started the Dallas Observer, it has been defined as the free, independent voice of Dallas, and we'd like to keep it that way. With local media under siege, it's more important than ever for us to rally support behind funding our local journalism. You can help by participating in our "I Support" program, allowing us to keep offering readers access to our incisive coverage of local news, food and culture with no paywalls.
Make a one-time donation today for as little as $1.