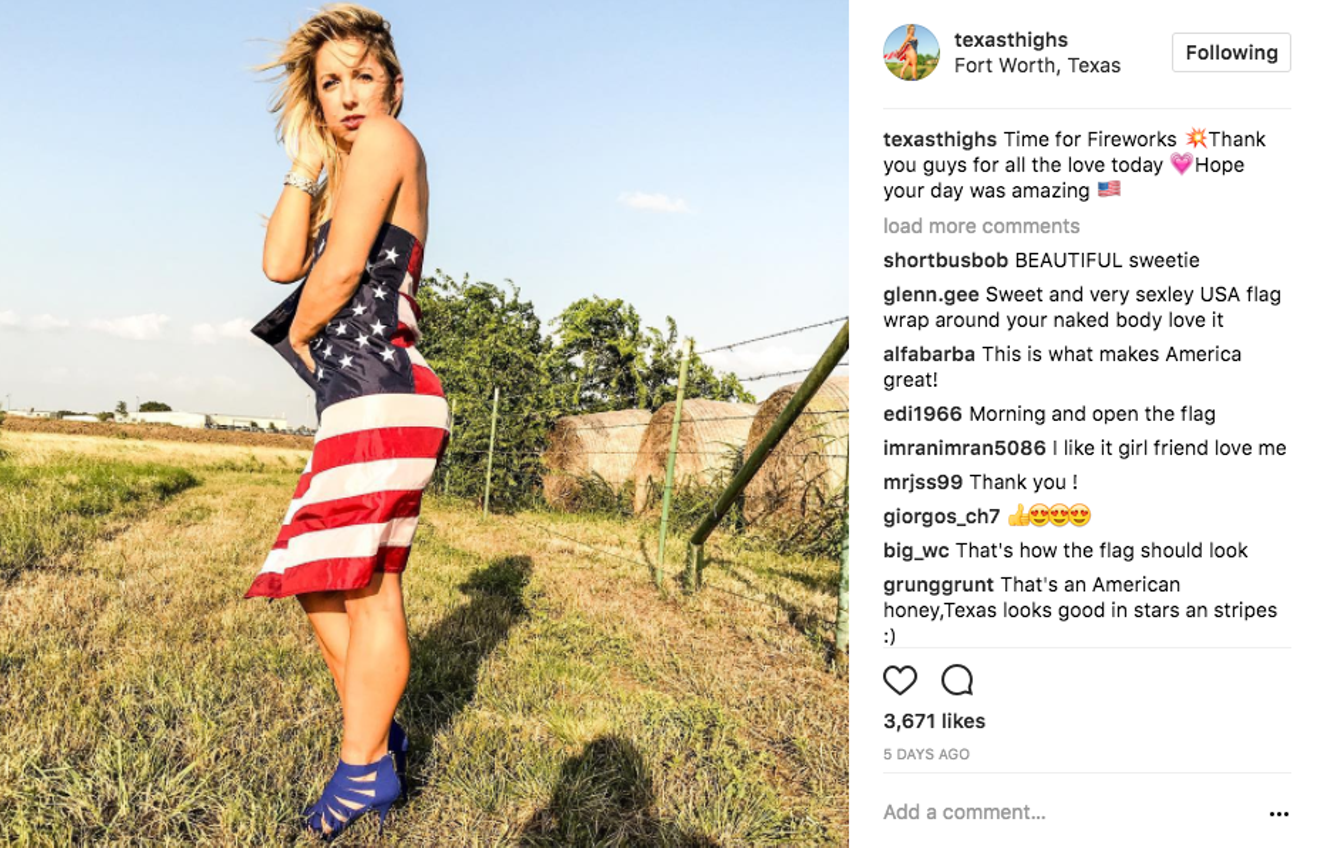 On July 3, Courtney Ann appeared on Instagram Live donning nothing but a Texas Rangers T-shirt. She stood up against the wall in her Fort Worth home, occasionally showing off the side of her butt, and answered questions from her followers.

More than 378,000 people, including several athletes such as Dez Bryant, follow her barely 1-year-old Instagram page, @texasthighs, where Courtney posts images of her bare, sculpted butt.

Courtney, who has never given out her last name, says the account started as something of a dare.

"My husband is always taking pictures of me and saying, ‘You’re so hot,’” she says. “As I've gotten older, I've tried to stay in shape, but with kids and everything, it's kind of crazy.”

She says after putting her 12- and 9-year-old daughters to bed, she stayed up and did squats. That’s when her husband snapped a photo, and together, they put the image online. If fitness models could do it, why couldn’t Courtney?

In the first month, she gained 15,000 followers. By the time she reached 80,000, she says, some family members found out. And they didn’t approve.

"It wasn't meant to be anything sexual or anything,” she says. “It was meant to be fun and positive. I try to keep everything on my page about being happy or positive or grateful or chasing goals, whether it's physical or mental. So it was interesting when I did start getting a lot of, ‘You're a mom; you’re too old to be doing this.’ I would think about famous moms who do sexy stuff or whatever and have fun with embracing their woman inside, so why are they the only ones who get to do it? If you work out and work hard, why can't you embrace yourself too?”

Courtney also owns a housekeeping business, but she's a mother first and says that’s always been her most important role. Her children know about the account and don’t view it as anything different than what they see in the media.


"I did start getting a lot of, 'You're a mom; you're too old to be doing this.' I would think about famous moms who do sexy stuff ... why are they the only ones who get to do it?" – Courtney Ann (@texasthighs)

"It's not any different than stuff we see at the mall,” she says. “There’s a 54th Street Grill right here — it’s a family restaurant, and there's chick pictures everywhere. To them, it's kind of everywhere anyway, so they just kind of see it as, ‘Mom looks pretty.’ And they know how hard I work out. So they just see it as, ‘If others can do it, then mom can do it. Good for her.’”

About a week after one of Courtney's Instagram Live sessions, she strolls into a neighborhood Starbucks in Fort Worth. The mother of two is wearing shorts and a sleeveless shirt, showing off her toned arms. She says she drove for hours last night looking for her family’s dog after he got out.

It’s a slightly different image than the one portrayed on her Instagram. Neither her kids nor her husband make appearances on the page — besides being listed in her bio — and Courtney didn’t even show her face until about a month in.

Courtney says she receives plenty of rude comments asking how she thinks it’s OK to post the pictures, considering she’s a mother and wife. And plenty of people — she suspects people she knows — flag her photos to Instagram, which led Instagram to take down her page for three weeks before restoring it. The company blamed the takedown on a mistake.

Despite it all, she continues to post photos daily and has expanded the page to a small business, offering memberships for $10 per month to anyone who wants to see her private Snapchats, which are pictures at the same risqué level of her public Instagram. She says the members are mainly men but include some women and men who want to be inspired to work out more.

Courtney says she tries not to think about what the men might do with her pictures.

"People like to share all their thoughts about it,” she says. “I don't respond to trolls on Instagram because there's too many of them, but they took it to that different level, like that's not what I'm doing it for. It's fun. I don't judge other people; they can do whatever. It's their business.”

Her husband, Nick, who is behind the Instagram @mr.texasthighs and who usually takes Courtney's pictures, supports her.

Courtney and Nick both say she receives attention for her looks when they are out together, so the online attention doesn't feel much different.

"I don't get jealous of the attention because I've been putting up with it in reality," Nick says. "If we go to a family event, if we go to a bar, if we go places, it's less protected than it is on the internet," he says. "It was something I was already used to — maybe not in such a vulgar manner, but they're just words, so I don't think that much of it. People are very strong in front of their keyboards, so they say things that maybe they shouldn't. But I've seen things in person that have probably made me madder."