A Peek Inside the Peacock Theater, a Small Stage That Hosts Some Larger-Than-Life Performers 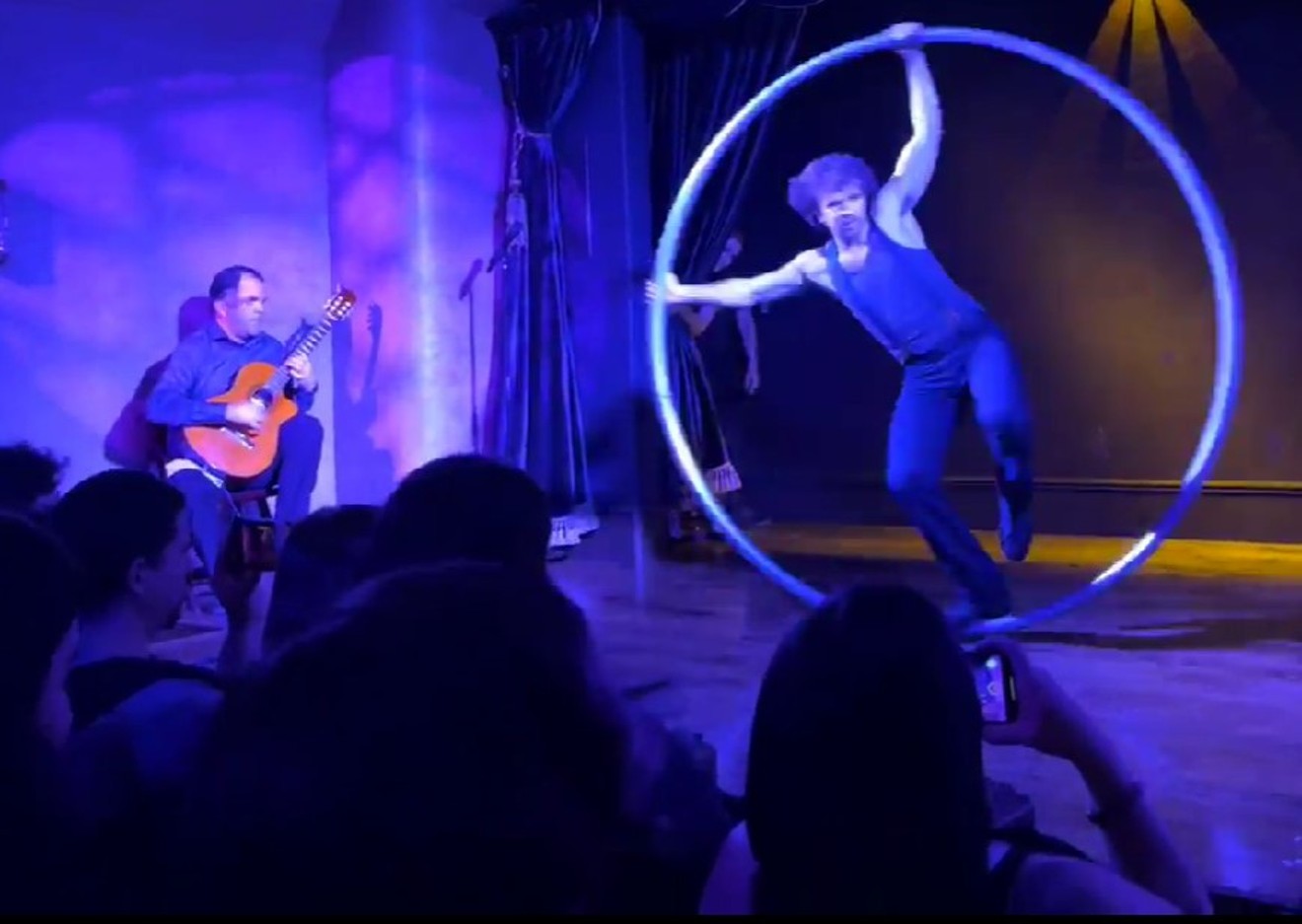 Guitarist Tim Courtney improvises a soundtrack to the movements of David Poznanter as he spins around on a metal ring. Danny Gallagher
If you're lucky enough to get an invitation to the Peacock Theater in Frisco, you'll experience something that even the biggest and grandest stage can't replicate.

The Peacock Theater is a small, 100-seat enclosed theater on the second floor of a castle-themed home owned by Randy and Kristy Pitchford in Frisco. Every month, the theater hosts some huge names in magic, juggling, acrobatics, comedy and music to a small audience in a space that captures their attention because, unlike at other venues, they aren't sitting miles away from the stage ad they aren't there to do anything other than see a show.

"There is an aura of an friendly audience immediately here that you don't get when you perform in big cities," says Las Vegas magician Jacob Jax, who performed at the Peacock Theater last Saturday for the first time. "I live in Las Vegas, and sometimes people go to shows passively not because it's 'God, I want to see a show.' They go, 'Well, I should probably stop gambling for an hour' and then they're not kind of watching ... it.

"Everybody in that audience is like how cool is it that there's live variety entertainment in our city, and I feel instantly comfortable that I can do whatever I want," Jax adds.

Randy Pitchford, the founder of the video game studios Gearbox Software that launched titles like Half-Life and the Borderlands series, started his career as a magician in Hollywood. Later he moved into game development and built the first incarnation of the Peacock Theater 15 years ago in his former house. The people who've graced his stages include big names like Penn & Teller, Piff the Magic Dragon, Lisa Loeb and David Blaine, but it's also a place where magicians, clowns, jugglers, musicians and acrobats from all over the world can showcase their talent or try something new and daring.

"As children, and even if you didn't end up becoming an entertainer, we may have always had that experience where we're like, 'OK, I have an act, Mom and Dad,'" says performer Lindsay Benner, who booked the acts for the Peacock Theater's most recent show. "'Sit on the couch. I'm going to do this thing,' and then they press play on the tape player and you do your little act. I think anytime I can get back to that childhood feeling, it's my favorite thing and that's what these kind of shows provide." 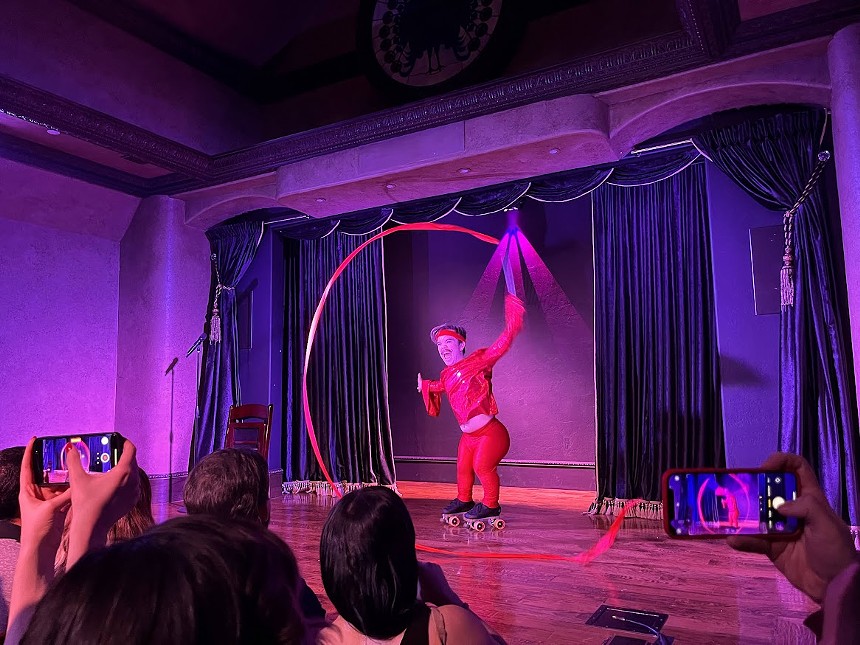 Tyler West skates, skids and slips around on stage to the song "Total Eclipse of the Heart" by Bonnie Tyler at The Peacock Theater in Frisco.
Danny Gallagher

The performances start the minute the theater's guests walk through the big set of medieval-themed doors. Some of the performers scheduled to go up later in the night perform sleight of hand and card magic in the Pitchfords' living room. Guitarist Tim Courtney plays some familiar acoustic guitar covers using a small amp that fills the room.

"There's a generosity of spirit that comes from being outside of a Las Vegas town," says juggler Michael Goudeau. "It's a big night where people get dressed up, they go to dinner and they come to a show, and it's great."

The house itself is one giant magic box with secret passageways and doors. They reveal things like an even smaller theater called the Gallery of Intimate Magic that seats about 30 for close-up magic shows and a "de-materialization chamber" trick with an ending even the steadiest eye could miss.

"My dream is to create a circuit," says Randy Pitchford, "the kind of place I wish existed when I was performing live, and this is sort of a prototype."

Pitchford's current circuit also includes the iconic Magic Castle in Hollywood, which he bought earlier this year, a place he holds in deep reverence for its history and opportunities. It's also where he and Kristy wed in 1997. He says he's looking for another site in Dallas or Los Angeles to open a Peacock Theater that will be open to the public.

"My plan is to do a public venue probably here or in L.A. and use that to create content that I can also share digitally so I can build some reputation for the place," he says. "Then I can build Peacocks in different cities around the country."
click to enlarge

Magician Jordan Gold performs an illusion in the Gallery of Intimate Magic, a small magic theater located behind a hidden wall in the home of Randy and Kristy Pitchford in Frisco.
Danny Gallagher

The present incarnation is a special place not just because of its exclusivity and the cozy relationship it can create between performers and an audience. The Pitchfords lodge the performers in their home around the time of each new show so there’s a more familiar feeling come showtime.

"These are my favorite kind of shows because you can dwell with people,” Benner says. “You get to hear showbiz stories. You can collaborate with people in a way that you can't when you just show up to do a variety show and then go home. You get to hand out and create this little vibe, and it crescendos into the show, and then you chill out and move on. It's these really magic evenings. It's like a bonding moment for the performers who are a part of it."

The experience of watching a show in such a small, cozy space makes it seem bigger. The show can veer from hilarious to heartwarming in a matter of seconds, creating uproarious laughter and sudden silences that feel as delicate and breakable as a thin sheet of glass.

The place can make performers feel like the spotlight is on them even when it's not.

"We're so used to doing gigs where we're either playing in the background at a private event or the center stage at a recital or a concert," says guitarist Tim Courtney, who played an improvised composition to the movements of a breathtaking acrobatic act with performer David Poznanter. "So to come into this where you're part of an overall variety show, and improv is not really something that I do, but when I'm asked to accompany somebody that's spinning around in this wheel at high velocity mere feet from them and realizing I'm just gonna follow the flow of his act and fit to what he's doing.

"Having a moment like that with someone that's not even a musician and is just someone doing something I've never seen before, it's not anything what I expected. I had no idea I was gonna be that big a part of the show."
click to enlarge 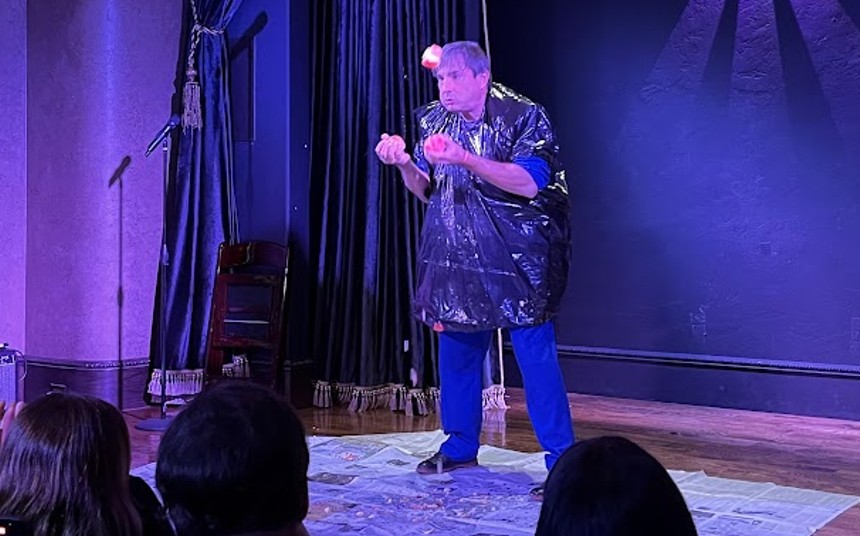 Juggler Michael Goudeau eats and juggles three apples at The Peacock Theater on Saturday.
Danny Gallagher
KEEP THE DALLAS OBSERVER FREE... Since we started the Dallas Observer, it has been defined as the free, independent voice of Dallas, and we'd like to keep it that way. With local media under siege, it's more important than ever for us to rally support behind funding our local journalism. You can help by participating in our "I Support" program, allowing us to keep offering readers access to our incisive coverage of local news, food and culture with no paywalls.
Make a one-time donation today for as little as $1.