Glenn Beck Dressed Up Like a Cowboy at CPAC, But We Know Better 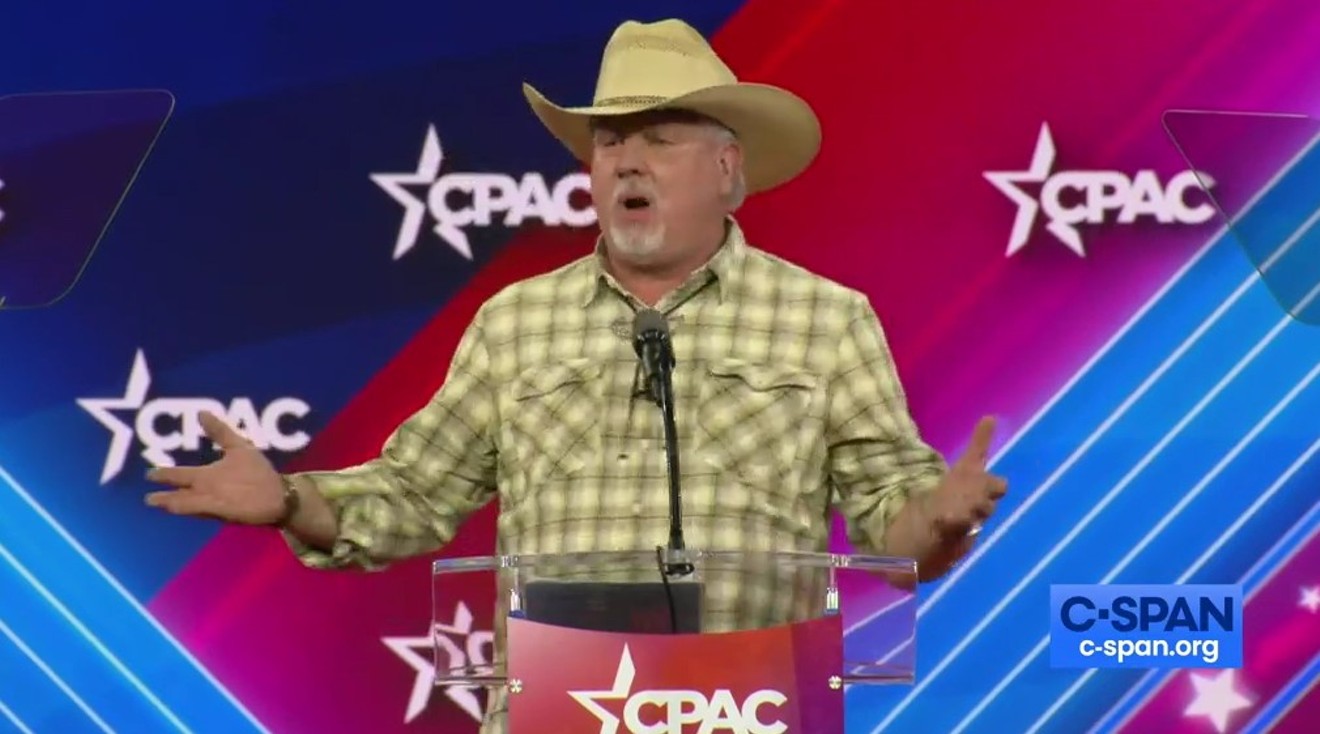 The Blaze founder and banana-flavored Laffy Taffy cosplayer Glenn Beck spoke at CPAC in Dallas on Sunday, Aug. 6. Screenshot from C-SPAN
It's easy to make fun of Glenn Beck. So, let's do that.

This time, we're not going to dive too deeply into Beck's latest attention-grabbing tirade because we pretty much know what's under there. Since he caved and became a singing member of the MAGA chorus, Beck has become a thick layer of rancid caramel that can shapeshift into whatever the members of his base want him to become in the moment.

Beck was one of the featured speakers at the Conservative Political Action Committee conference held in Dallas last weekend, where he walked out to the stage dressed in an outfit that made him look like the Southwest regional manager for Country Time Lemonade.

His outfit was yellow from the top to the middle, so yellow that it somehow made his hair and skin also look yellow just from sheer osmosis. Beck was sporting an off-yellow flannel, a pair of dark blue jeans and a straw cowboy hat as he strutted to a pulpit made of clear glass, which probably had its own Windexing team to clean all the angry spittle that was spewed behind it.

Usually, the hat is a dead giveaway that someone is trying to pretend they're more important than a regular-sized head can convey. The bigger the hat, the faster you notice it. Third-world dictators and despots have employed this literal hat trick throughout recorded history. Case in point: Attila "Big Ol' Hat" the Hun, Benito "Evil Fez" Mussolini, Muammar "All Brim No Brakes" Gaddafi and Kim "Long Hat" Jong-il.

Beck's headwear is a little more understated, but it's not the bow on this poorly wrapped gift he's offering to make attendees think, "By God, he's just like us" — even when he's wearing a hat that looks like something he picked up from a Love Field gift shop on the way to the conference.

The bolo tie Beck was wearing screams, "Please Texas! Love me! What must I do to make you love me?" It's huge, with a huge-r silver eagle medal right in the middle, big enough to hold a slice of American apple pie. And it's not pulled up all the way. Wearing a tie correctly makes you look like a serious stuffed shirt. Beck made sure his eagle was flying just close enough to the ground to make you think he's about to spit and make Marty McFly "dance" with his guns.

It's painfully obvious what image Beck is trying to pull off. He doesn't just walk in his cowboy costume, he talks in it, too.

"I just got off a ranch in Idaho where I've been for the last couple of months," Beck said in the opening moments of his talk, "just being with real people and people who are working hard and wondering what the heck is going on in America."

For starters, what did he mean by "real people?" As opposed to what, cartoons?

That whole statement is filled to the very brim with sus motives. Glenn Beck is a cowboy in the way that Woody from Toy Story is a cowboy. This version of Glenn Beck is what City Slickers 3 would've look like had it been greenlit.

The façade doesn't stop at Beck's inseam, which is a low bar to begin with. Take, for instance, the places where Beck and his family live. Take a guess. A small town where the only things that mosey down Main Street are the occasional tumbleweed? Or perhaps Beck hangs his hat at the end of the day in a quaint, rustic cottage on the outskirts of Hico or Escobares? Maybe he bought the only residential dwelling in Frontierland at Walt Disney World?

Nope. Beck lives in Westlake, a Texas town of 1,500 people on the border of Denton and Tarrant counties where the aggregate (not average) wage is $161,530,000. It's the Westlake where two years ago the schoolkids chanted, “We’re rich, we’re white, we’re Westlake.” It's a super-rich town filled with super-expensive mansions and super-white people.
click to enlarge Beck's former rental in Westlake. Howdy there, real people.
Elite Auctions
Beck has lived in at least two sprawling homes in Westlake, including one rental that belonged to Vanessa Swarovski, the heiress to Austria's crystal empire. The other is a two-story estate situated not on the edge of a rocky cliff or a prairie full of fresh grass for the cows but on "the largest golf course lot in prestigious Vaquero," according to the realty website Trulia.

Neither listing has anything about housing for cows unless you count the tacky Western theme in some of the homes' rooms. Some of them look like what you'd get if Pancho's Mexican Buffet had sex with a Justin Boot Outlet.

It's just sad. Beck was once the king of the crazies during his Fox News stint. His name fell out of the mouths of census haters, doomsday bunker builders and debate screamers with more Nazi similes than a Mel Brooks movie. It feels like Beck's reign barely lasted longer than Morton Downey Jr.'s. He is now a walking cliché, especially after he turned from a "Never-Trumper" to a full-on MAGA head when he used another type of hat — in this case, a red MAGA hat — in 2018 to maintain what little relevance he has left.

Actually, it's an accomplishment to make a MAGA hat look good by comparison.
KEEP THE DALLAS OBSERVER FREE... Since we started the Dallas Observer, it has been defined as the free, independent voice of Dallas, and we'd like to keep it that way. With local media under siege, it's more important than ever for us to rally support behind funding our local journalism. You can help by participating in our "I Support" program, allowing us to keep offering readers access to our incisive coverage of local news, food and culture with no paywalls.
Make a one-time donation today for as little as $1.