Fangoria Magazine Rises from the Dead Thanks to Cinestate 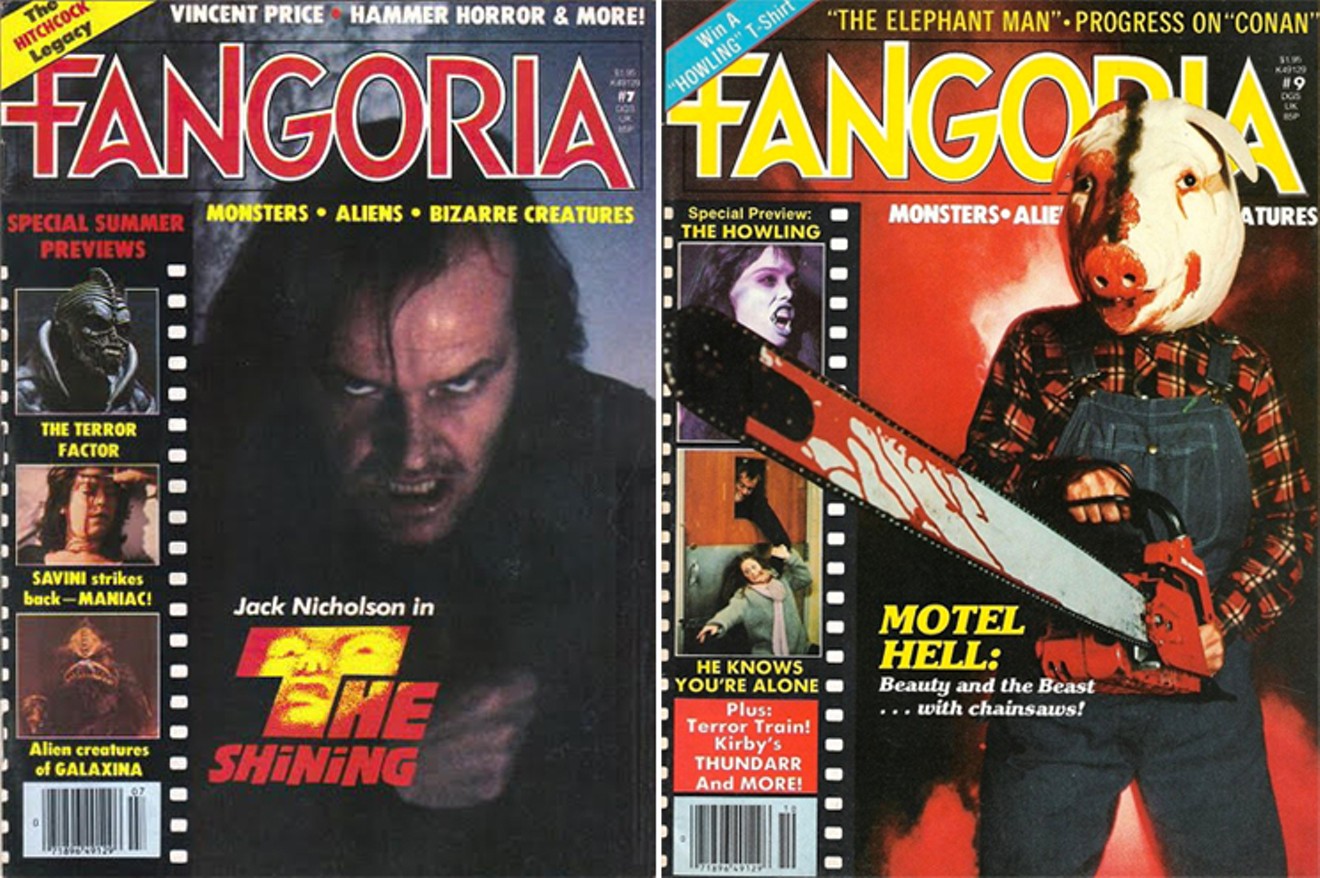 The Dallas movie production studio Cinestate is putting the cult horror magazine back into circulation. Courtesy of Cinestate
Horror fans will finally have an excuse to read something besides the latest Stephen King novel they are legally required to read whether or not it's actually a horror story.

The Dallas-based movie and publishing studio Cinestate announced that it’s reviving the horror movie magazine Fangoria for print and setting up the magazine’s official headquarters in Dallas.

Cinestate CEO Dallas Sonnier acquired the rights to Fangoria from its previous owner The Brooklyn Co. and its previous publisher Thomas DeFeo sometime over the last few months, a move that took more than a year of meetings and rights pursuits. The deal happened thanks in part to a $5 million investment from “a member of a prominent Texas family that wishes to remain anonymous,” according to a statement released by the company.

“I was not interested in resurrecting a print magazine but the granddaddy of horror movie magazines,” Sonnier said. “If you look at the success of high-end art and fashion publications as well as the movie collectible world (i.e. Mondo, Scream Factory), there is a huge market for it that folks want to display with pride on their bookshelves.”

The magazine’s staff lead by its new editor-in-chief Phil Nobile Jr., the former editor-at-large of the Alamo Drafthouse’s movie news website and magazine Birth.Movies. is already working to launch in the first new quarterly issue in almost a year. Sonnier said they also plan to produce new horror movies and novels under the Fangoria moniker.

“I’ve been reading Fangoria since 1985,” Nobile said. “This is an honor and a dream gig. We announced [Thursday] and the overwhelmingly positive response on social media was both encouraging and daunting. Stephen King welcomed us back, for Pete’s sake!”

Fangoria magazine first went into production in 1979 under the independent company Starlog Group Inc. and its publishers Kerry O’Quinn and Norman Jacobs, who published the sci-fi and fantasy magazine Starlog. The plan was to publish a magazine that focused on movie monsters, but a gore-splattered feature on special effects master Tom Savini, best known for his work in movies like Dawn of the Dead and Friday the 13th, shaped the blood-soaked future of the horror magazine for years to come, according to an Entertainment Weekly profile.

Fangoria's gruesome covers showcased lesser-known horror films, and its gory monsters helped shaped and boost some of the genre’s biggest films and franchises, such as the Evil Dead movies directed by Sam Raimi and starring Bruce Campbell. The movie series has been spun off into its own serialized show on Starz. (Fun fact: The magazine made a cameo in Army of Darkness during a montage scene as the film's wisecracking hero scrounges through the trunk of his 1973 Oldsmobile Delta 88 for bombmaking materials to prepare for his final showdown with the ).

The magazine also started one of the first successful fan conventions in the mid-1980s with its Weekend of Horrors with icons such as Vincent Price, Christopher Lee Jack Nicholson, and even its own awards show for horror films in 1992 dubbed The Chainsaw Awards.

The magazine struggled to stay alive in the early 2000s as the internet gave way to a new form of publishing and studios became more reluctant to reveal their films' star monsters on its covers. Fangoria ceased its print operations in February 2017 because of a lack of advertising revenue despite the paid subscriptions they promised to fulfill with their customers.

Nobile said the first step to rebuilding Fangoria’s publishing empire is delivering on those promises. They’ve already offered a free year-long subscription to the quarterly magazine to subscribers who failed to receive a full paid subscription when the print division ended last year, according to an announcement on its official Twitter feed.


“We are exclusively a print magazine,” Sonnier says. “For now, we will not be posting the articles from the magazine anywhere online.”


“Cinestate is coming to Fangoria at a time when the magazine’s name has a suffered a bit of a black eye,” he said. “There were financial problems with the previous owner, distribution issues, people didn’t get what they paid for. We knew we’d have to rebuild the trust readers had in the brand.”

The new Fangoria staff will also have some familiar names and faces on board as part of Nobile’s rebuilding process, among them former Editor-in-Chief Tony Timpone and former managing editor and writer Mike Gingold.

“It tells readers we know quality for starters,” Nobile said. “Tony and Mike were pretty much responsible for the magazine’s golden age. Their involvement also tells readers we’re going to do this correctly. And in a very real sense, it wouldn’t feel like Fangoria without their presence, you know? "

Both Sonnier and Nobile said the main focus of Fangoria will be on producing a full-color, physical, print magazine.

“We are exclusively a print magazine,” Sonnier says. “For now, we will not be posting the articles from the magazine anywhere online.”

Nobile said part of the challenge of recapturing Fangoria’s storied and bloody history starts by putting it first on glossy pages.

“We will obviously have an online component, and hopefully our plans there will engage readers as well, but my Fangoria, the coveted, colorful magazine from the '80s, was something I had to hunt down and then pore over from cover to cover,” Nobile says. “It was tactile, tangible. There was a rush to getting the new Fango and my priority is to recapture that rush for readers.”

The other challenge with a print magazine as beloved as Fangoria is pleasing the fans who see it as something they helped shape and create, Nobile says.

“The challenge with resurrecting something so storied and beloved is not to screw it up,” Nobile said. “As I told Dallas, ‘You might think this is your magazine, but the readers are 100-percent certain this is their magazine.’ We have to respect that sense of ownership and respect the magazine’s history, but at the same time, if we put out an empty nostalgia trip, it’ll be called out immediately. So there’s going to be this constant push/pull of legacy and evolution, and I know there’s a perfect balance to be struck. Figuring that out will be the fun part.”