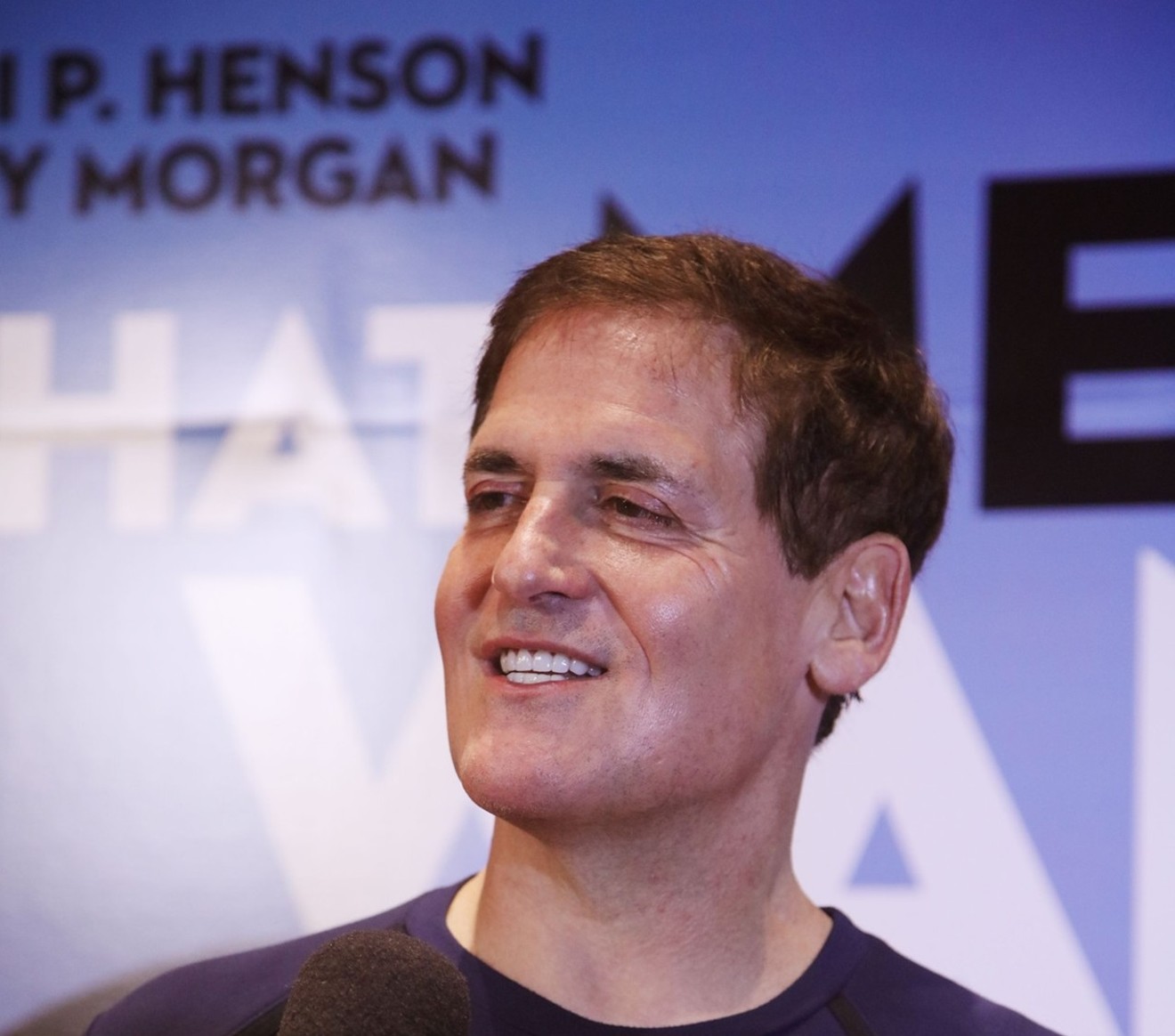 He's not a regular billionaire, he's a cool billionaire. Mark Cuban went high-tech at the Podcast Movement con in Dallas. Peter Larsen
It was a big weekend for podcasts. In Dallas, Friday was the last day of the Podcast Movement convention, "the largest gathering of podcasts," as they call it. And Duchess Meghan Markle's debut episode of Archetypes dethroned Joe Rogan for the No. 1 spot on Spotify's podcast chart.

It's crazy to think back to 2005, when an update added to iTunes suddenly included a section called "Podcasts," back when the majority of people really didn’t know what a podcast was and spent most of their time on iTunes trying to figure out how to get music transferred from the platform onto their iPods. Now, 17 years later, you could walk down the street and ask any random person their favorite podcast and they will have an answer for you. And those who don't have one should know that any time they watch Drink Champs, No Jumper or the Joe Rogan Experience, they are watching a podcast.

Attached to any flourishing industry are conventions that highlight, educate and promote inclusion in the community within that space, and since 2014, Podcast Movement has been doing its part to help push the podcast and independent radio industry forward. Podcast Movement’s convention took place Aug. 23–26 at the Sheraton Downtown Dallas and featured over 100 sessions, panels and keynotes that included Laci Mosley from Scam Goddess, Phoebe Judge from Criminal and Mark Cuban and Falon Fatemi from the podcast platform Fireside.

The next podcast convention will take place in March 2023 in Las Vegas.

The breakout sessions included entry-level education for people looking to start their own podcasts and some for more seasoned podcasters, covering topics such as monetization and finding ways to secure more listeners. One group of panelists included guests from Kenya and Egypt, who discussed the current state and future direction of the podcasting industry in Africa.

One highlight of the convention was no doubt Cuban and Fatemi’s keynote on Fireside, which is the first interactive web3 streaming platform. Cuban and Fatemi are co-founders of the innovative hosting platform, which Fatemi operates as the CEO.

“We believe that the future of media and entertainment is participatory, where you as audience members are not just a part of the show but you can be the co-creator and as a fan even play a really intimate part in the creating of the production process," Fatemi told the attendees. "And then on the other side of it, there are talent, there are brands and organizations out there today that have greater audience reach than these traditional media and entertainment broadcasters. So with the right technology platform, analytics and ownership model, we can basically help accelerate and help you grow.”

Fireside can allow creators to run their own digital network — which would include simultaneous live distribution to multiple platforms like YouTube, Instagram and Facebook. This allows for creators to reach their audiences from whichever platform they choose to stream their content. While on stage, Cuban and Fatemi broadcast the keynote live and gave people who attended virtually and physically a short tutorial on Fireside’s functions.

“Think about that,” Cuban said. “You have a full distribution studio in the palm of your hand. [We’re on] YouTube right now, Fireside right now, on the web right now. Easy, easy peasy.”

Podcasters, according to the Fireside founders, can have their shows distributed to any other podcast platform where they have listeners.

“We want to be able to take the content you create and enable the distribution of that everywhere,” Cuban said.

“We want to be able to take the content you create and enable the distribution of that everywhere." – Mark Cuban


The app, which has attracted big-name creators such as Jay Leno, is pushing a valuation of $125 million.

Another highlight of the convention was the Africa X Podcasting breakout session, where audience members learned about the podcasting landscape on the continent from those on the ground. The panelists projected Africa could become the largest frontier of podcasting because it has so many people with untold stories and ideas that have yet to be broadcast to the rest of the world.

Dan Aceda, CEO of SemaBox, touched on his incubator and podcast production company, which has distributed over 700 episodes from women creators and people who identify as non-binary. SemaBox, he said, helps get their content distributed and most important, helps them get paid for their work.

Podcasts are programs made available in digital format for automatic download over the Internet. But they can also be described as personalized radio on demand for the listener. For example, someone might not like the host of a talk show that is aired on the radio, but a podcaster who covers that same topic or industry might resonate better with the listener. And if you miss the livestream, you can just play it back when you have some free time.

There is a podcast for pretty much any subject you can think of. There are fiction, non-fiction, sports, business, finance, music and even podcasts for kids in the form of fictional audio show series or engaging educational content.

And it makes sense that whenever anything becomes global, Mark Cuban would be there trying to improve it. After Cuban's discounted online pharmacy became a lifesaver to many who could otherwise not afford their overpriced medications, we can only hope he gets into cancer research soon.
KEEP THE DALLAS OBSERVER FREE... Since we started the Dallas Observer, it has been defined as the free, independent voice of Dallas, and we'd like to keep it that way. With local media under siege, it's more important than ever for us to rally support behind funding our local journalism. You can help by participating in our "I Support" program, allowing us to keep offering readers access to our incisive coverage of local news, food and culture with no paywalls.
Make a one-time donation today for as little as $1.