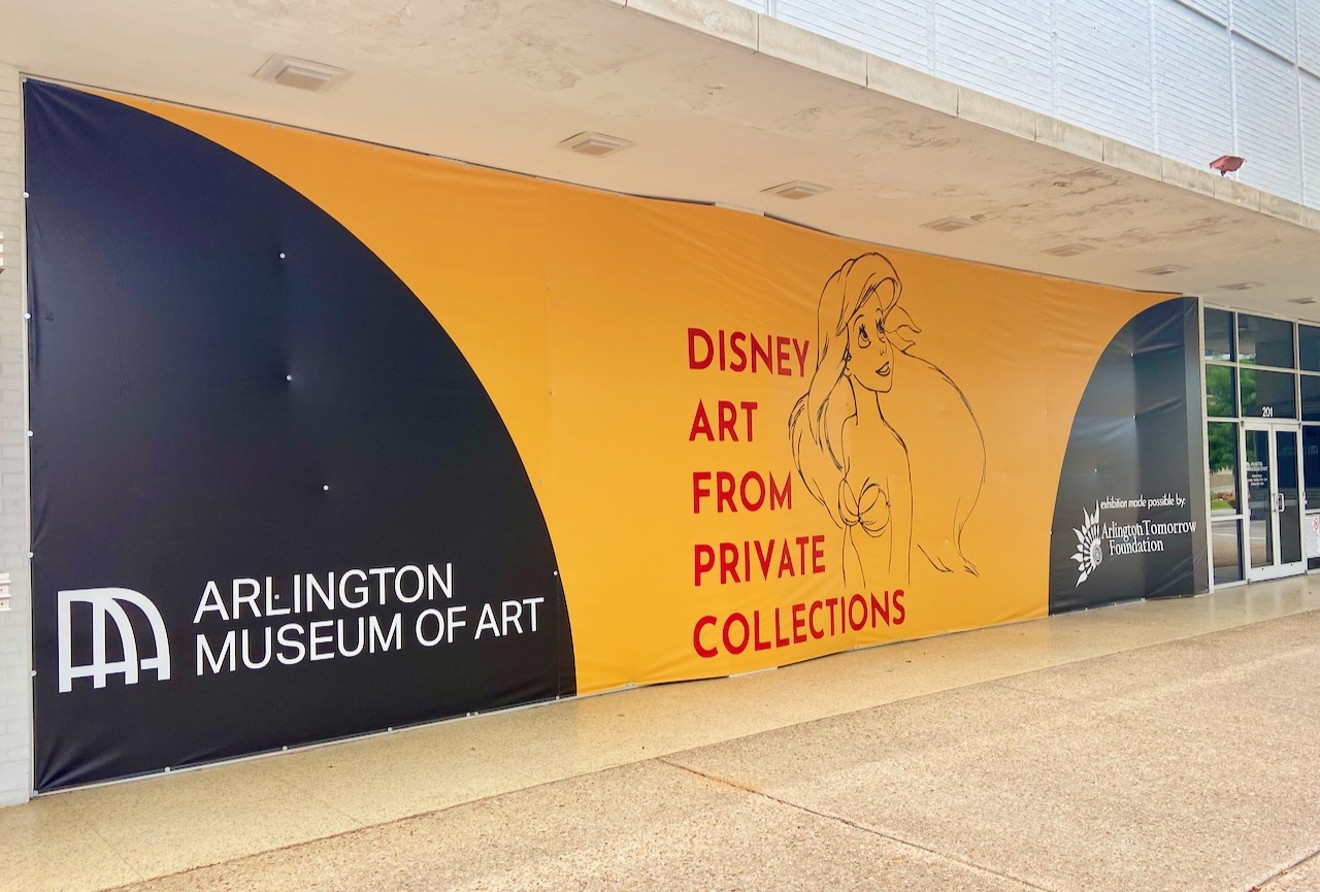 Ariel and other Disney characters are featured in a new art exhibition in Arlington. Tyler Daniels
From Marvel icons to princesses, superheroes, sports idols, villains and sidekicks, Disney has something for everyone. An exhibition in Arlington that opened in June reminds us of just how much the Magic Kingdom has reigned over our lives.

Through Sept. 4, the Arlington Museum of Art is running an exhibition called Disney Art from Private Collections.

The collection comprises over 250 pieces of original work by some of Disney’s greatest creators, and it includes animation sketches, character studies, storyboards and concept drawings.

Disney animation legends Frank Thomas, Ollie Johnston and Andreas Deja all have private works in the exhibition, including some personal pieces from Deja, who worked directly with the AMA.

Deja told Amy Schultz of the AMA, “When the Arlington Museum of Art asked me if I was interested in an exhibition that would feature my work from the Disney Studios, as well as some personal art, I felt flattered and excited,” according to a press release.

The exhibition will feature works that go back 80 years, including drawings from classics such as Snow White and the Seven Dwarfs, Pinocchio, The Little Mermaid, The Lion King, Peter Pan and others.

AMA president Chris Hightower spoke with the Observer on the specialness of these works.

“Not only are they pieces of pop culture history, but they also show the true artistic talent and innovation that the animators possess." – AMA president Chris Hightower


“It's a true honor to be able to show these sketches, casts, production cels and more from Disney films," he says. "Not only are they pieces of pop culture history, but they also show the true artistic talent and innovation that the animators possess. We're thrilled to be able to show the complexities of visual art through animation.”

Hightower says that the exhibition has been a great success so far.

“We've been so excited to welcome kids of all ages since the opening," he says. "The exhibition is on track to become one of the most-attended exhibitions in our history.”

The AMA has also planned special events and programs for children and adults in support of the exhibition. On July 26, as well as Aug. 9 and Aug. 23, you can catch a guided tour of the works, available in both English and Spanish. On July 30, it’s costume day at the museum, and guests are encouraged to wear Disney-inspired attire. On Aug. 18, Academy Award winner John Canemaker, who did animation work on films such as Fantasia, will be on hand to talk about the iconic animations of Disney.

The exhibition began on June 11 and runs through Sept. 4, at Arlington Museum of Art, 201 W. Main St. Purchase advanced tickets online or at the door. Groups of 10 or more will receive special discounts.
KEEP THE DALLAS OBSERVER FREE... Since we started the Dallas Observer, it has been defined as the free, independent voice of Dallas, and we'd like to keep it that way. With local media under siege, it's more important than ever for us to rally support behind funding our local journalism. You can help by participating in our "I Support" program, allowing us to keep offering readers access to our incisive coverage of local news, food and culture with no paywalls.
Make a one-time donation today for as little as $1.