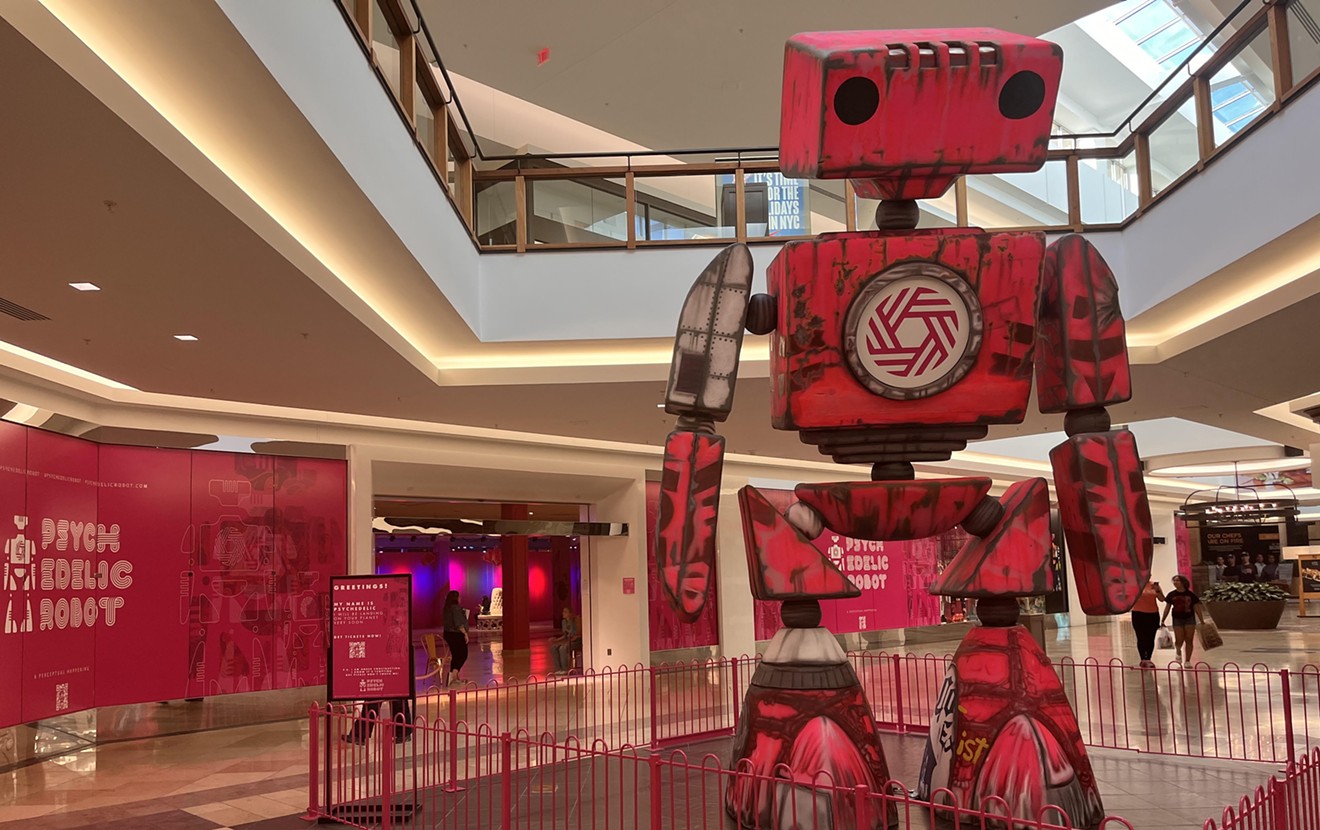 The entrance to the new Psychedelic Robot exhibition at The Shops at Willow Bend is guarded by a life size sculpture of the robot built by local sculptor Johnney Edwards. Danny Gallagher
It's been almost two years since Psychedelic Robot unleashed an artistic collaboration on Dallas. Now, they've summoned the robot for an ambitious project in The Shops at Willow Bend.

Psychedelic Robot's third art experience opened Thursday night in Plano and offers paintings in a number of different styles by eight different artists. These create a cohesive, episodic experience that allows visitors to work through an immersive graphic novel telling a story about the gallery's titular metalhead.

"We're blending art, technology and audio all together and stretching the genre of storytelling," says Psychedelic Robot founder Michael Bivins, who created the art experience with his wife, Karen. "This is like a giant comic book, and I think it's a way that younger people can appreciate art with things they might be interested in."

The gallery has nine surrounding art pieces that roll out the origin story of the Psychedelic Robot in three walled rooms, with every inch of space covered by the artist's vision. These include local names such as Armando Aguirre, Brooklynd Turner and Ryan Stalsby. Graphic designer and graffiti artist Tex Motion created the main "icon room" that lays out portraits of the story's central characters in the middle of the exhibition. Screenwriter Douglas Scott Hessler constructed the story.

The experience, which runs until Sunday, Aug. 28, also includes two immersive art pieces that guests can walk through and with which they can interact, including a "worm hole" that transports them through time during one point in the story and an "epilogue room" where guests can create and control a starry night sky on a projected ceiling.

"It's really unique and extraordinary," Karen Bivins says. "I don't feel anything like this has ever been done before."
click to enlarge Psychedelic Robot co-founder Michael Bivins takes guests through a preview of the paintings that make up the robot’s origin story.
Danny Gallagher
The experience starts just outside the entrance where guests are greeted by a life-size recreation of the Psychedelic Robot built by Dallas sculptor Johnney Edwards. The different rooms organized by numbers roll out the story of the robot's discovery and journey to Earth in the 1960s right in the middle of the Woodstock music festival, whose message of peace and love inspires the robot to give himself a groovy makeover.

Meanwhile, the robot is being pursued by government agents who aren't sure about the hot pink being's motives for visiting Earth. The robot is also being chased by an evil overland named Dravena who discovers Earth while pursuing the robot and sees it as a place that's ripe for conquest.

The entire experience is punctuated with an original soundtrack and a narrative spoken by a benevolent dragon named TERRA-NOVA-X, represented by a sculpture of the giant toothy beast poking out of a wall at the start of the exhibition's story. The dragon serves as the story's narrator and is voiced by acclaimed conductor Peter Manning, best known for his work in London's Royal Opera House and locally as a guest conductor with the Dallas Opera.

The paintings switch between styles such as portraits, minimalism, comics and graffiti to provide a veritable variety of visual mediums.

"We really hand-selected our artists this time," Karen Bivins says. "We had hundreds and hundreds of submissions to be involved and we chose a very small group who we felt contributed most to the vision of this. We wanted to get street artists to depict the vision in different ways and depict characters in their own style. It's the same characters but each are done in a unique style."

Even though the room's paintings are done in different styles, they still merge together to lay out an adventure story about love, peace, war and humanity because "time has no meaning in this story," Michael says.

"At the end of the day, it's really a metaphorical meaning of life of love and kindness," Michael says. "With what's going on in just the last 24 hours, it's time to celebrate life." The Psychedelic Robot’s story is narrated throughout the exhibition by a 10,000 year old dragon named TERRA-NOVA-X voiced by acclaimed orchestral conductor Peter Manning.
Danny Gallagher
KEEP THE DALLAS OBSERVER FREE... Since we started the Dallas Observer, it has been defined as the free, independent voice of Dallas, and we'd like to keep it that way. With local media under siege, it's more important than ever for us to rally support behind funding our local journalism. You can help by participating in our "I Support" program, allowing us to keep offering readers access to our incisive coverage of local news, food and culture with no paywalls.
Make a one-time donation today for as little as $1.