The Old Grey Wolf howled on The Ticket one last time. Radio legend Mike Rhyner announced his retirement on Monday. Mike Brooks
Former Pittsburgh Steelers coach Chuck Noll was a hard-ass. He transformed his team from an NFL punchline into a powerhouse. He was known to chew out players after terrible games and inspired the kind of respect that would lead his team to four Super Bowl wins, two of them against the Cowboys. 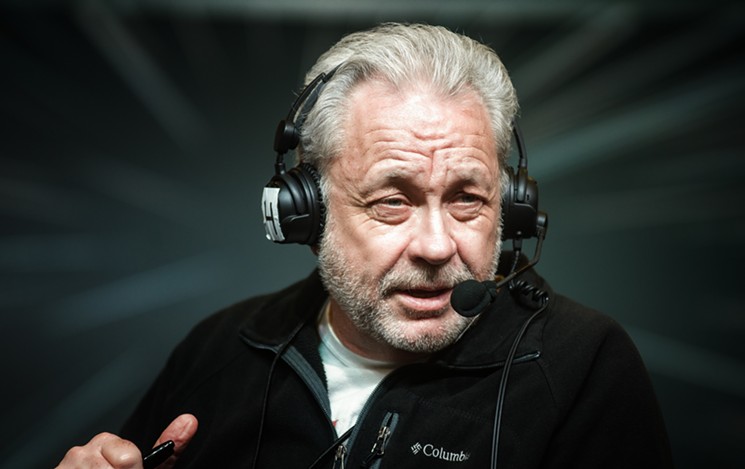 The Old Grey Wolf howled on The Ticket one last time. Radio legend Mike Rhyner announced his retirement on Monday.
Mike Brooks
Noll wasn’t one to mince words. Whenever a player was too old and broken for the game, the Hall of Fame coach would call him into the office and tell him that it was time for him to go find his life's work. It's a story, a legend, really, people in Pittsburgh hold dear to their hearts, much like the image of former Cowboys coach Tom Landry's stoic sideline figure still inspires a legion of older Cowboys fans. It's a tale Texas Radio Hall of Famer Mike Rhyner told in his farewell video to The Ticket fans on Monday.

Rhyner, 69, announced his retirement from The Ticket in a video he posted online and shared on his Twitter account. He leaves behind a 40-year career in sports radio and a legion of disheartened fans.

“I don’t have to find my life’s work,” he said in the video. “This has been it, and I am damn proud of it, and I thank you, The Ticket listener, more than I can tell you.”

Danny Balis, a Dallas musician who's worked with Rhyner since 2000, was as surprised as everyone else when he found out last week. “Mike is a total pro, one of the smartest people I've ever met, and has such an oddball goofy sense of humor,” he tells the Observer. “I knew I was working with a legend, and I never took it for granted.”

A Southwest Oak Cliff native, the "Old Grey Wolf," also known as "The Godfather," Rhyner didn't set out to become “The Ticket’s version of Reggie Jackson” (as he's referred to in the book The Ticket, Full Disclosure by Scott Boyter). He was a drummer in search of a rock ‘n’ roll band.

Rhyner began gigging in bands when he was 15 in the 1960s, jamming at gigs in Abilene, Tyler and Wichita Falls. “My parents thought this was a folly that would pass, but as it happened, I was able to make a little money at it, and they surely liked that idea,” Rhyner recalled in Boyter's book.

After 15 years of jamming, he decided to set aside his drumsticks and return to school for radio broadcasting at the University of Texas at Arlington. When he was a kid, he’d been a fan of the magic Russ Knight, The Weird Beard, who would spin on KLIF.

“I’ve never been able to put my finger on it, but radio was always magical to me,” Rhyner told the Observer in January 2006.


“Mike is a total pro, one of the smartest people I've ever met, and has such an oddball goofy sense of humor. I knew I was working with a legend, and I never took it for granted.” — Danny Balis, on Mike Rhyner

In the late ’70s, he landed a radio gig as a news intern for The Zoo KZEW, but longed to do sports radio. He eventually got his chance at The Zoo and stayed with the station until 1986 when it closed its doors.

Six years would pass before he hatched the idea of an all-sports station with his friend Geoff Dunbar. They were watching the 1992 Duke-Kentucky basketball game when they came up with the idea. It wasn’t an original idea for Dallas. Local icons Brad Sham, Norm Hitzges and Randy Galloway were doing sports talk shows. But no one was operating a 24-hour all sports station.

“Anybody that tells you we weren’t strongly influenced by Howard Stern, well, fold up your notebook and go home, because they’re lying,” Rhyner told the Observer. “We knew we wouldn’t sound like the other guys in the market.”

Or as D Magazine pointed out in a January 2014 profile: “Early listeners found someone more than sports on The Ticket. They stumbled upon a fledgling community of off-the-wall personalities whose stories, bits and observation on everything from football to the trivial frustrations of everyday life struck a chord.”

Like Stern’s popular radio show, Rhyner’s The Hardline program on The Ticket has had its fair share of controversy. His co-host Greg Williams “resigned” in early 2008 after a 13-year relationship with the program. He walked off in mid-syllable and checked into a drug rehab, as the Observer wrote in a July 3, 2008, cover story.

Then 105.3 The Fan tried to steal it away from The Ticket, but Rhyner decided to keep the show on the 1310 AM airwaves in an 11th-hour contract agreement after station owner Cumulus Media presumably forked over more cash.

“It was close, very close,” Rhyner told the Observer in February 2009. “The Fan made a really strong run at us. I mean, really strong.”

Rhyner has won numerous awards over the years as part of The Hardline lineup, including ESPN Sports Radio Personalities of the Year on several occasions. He was able to move on from the loss of Williams with Corby “The Snake” Davidson, a Fort Worth native who received a beating from fans when he first slid into Williams’ still-cooling co-host seat.

In 2014, Rhyner was inducted into the Texas Radio Hall of Fame.

Over the last 30 years, Rhyner had become the "Weird Beard" for The Ticket fans and was called “the voice of the radio station.” His legion of fans — 90,000 followers on Twitter alone — would tune in to hear the Old Grey Wolf howl from 3 to 7 p.m. daily.

When he decided it was time to step away from the mic, Rhyner didn’t pull a page from Jerry Jones’ How to Fire a Coach playbook and drop hints about it in the press or hold a news conference. He simply uploaded a video online where it wasn’t open to interpretation or spin by the media.

“Here you’re getting it straight up from me,” he said in the video. “We’re on vacation right now. Happens every year at this time. January rolls around, and we go back. We attack the new broadcast year. That will be the case this year as well with one difference. And that difference is, I won’t be there. It’s time for me to step away from the gig at The Ticket.”

Tributes to Rhyner poured in from Dallas media, and The Kessler changed its marquee to read: “Stay hard Rhyner. The lil’ Ticket. Hell of a run.”

Fans were quick to post their responses on social media.

“Legions are going to miss the hell out of you,” one fan wrote.

“Been home sick all day. Jump on Facebook to find out a big part of my teenage years, early adulthood and current adulthood is gone,” wrote another fan.

Former Dallas Cowboys quarterback Troy Aikman tweeted, “Listening to @dfwticket and hearing Mike Rhyner make the announcement that he’s moved on to the next phase of his life. Like many, my afternoons of listening to The Hardline won’t be the same. You’ve given us so many years of radio gold. A heartfelt ‘thank you’ to @theoldgreywolf.”

Balis can recall nearly all the pranks they pulled on Hardline, but “Alarmgate” is the one that immediately comes to mind. He and Davidson broke into Rhyner's hotel room and stashed 12 battery-operated alarm clocks around his room. They set the alarms to go off 30 minutes apart starting at 3 a.m.

“We stood outside their room all night and listened to the frantic chaos unfold,” he said. “None of us got any sleep that night, but it was worth it the next day on the air.”

Now that Rhyner is gone, Balis isn't sure what will happen to the show.

“The bench is deep at the station,” he says. “It's gonna be weird for a while, and I have no idea what the brass will ultimately decide. But we'll roll with it and work as hard, or harder than we ever have.”
click to enlarge

The Old Grey Wolf Mike Rhyner, pictured here presenting an award at the 2019 Dallas Observer Music Awards.
Mike Brooks
KEEP THE DALLAS OBSERVER FREE... Since we started the Dallas Observer, it has been defined as the free, independent voice of Dallas, and we'd like to keep it that way. With local media under siege, it's more important than ever for us to rally support behind funding our local journalism. You can help by participating in our "I Support" program, allowing us to keep offering readers access to our incisive coverage of local news, food and culture with no paywalls.
Make a one-time donation today for as little as $1.