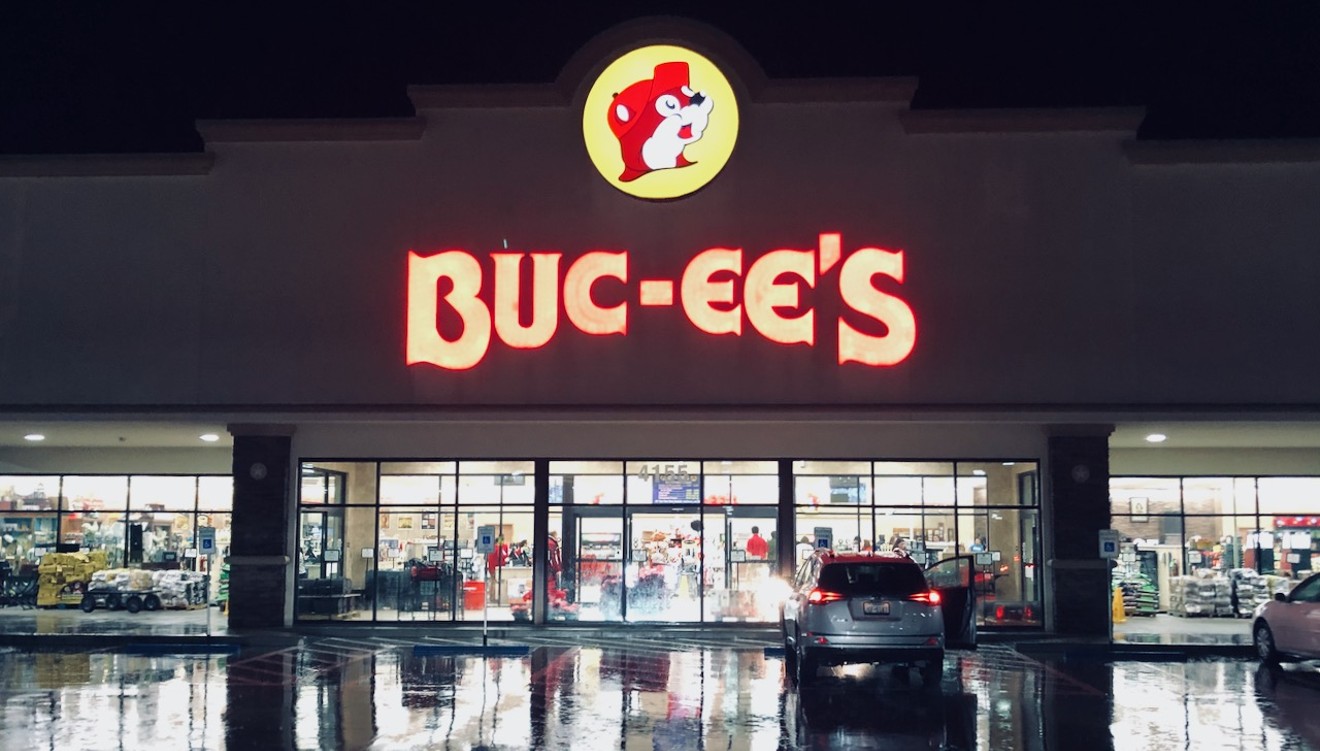 Ashley Muller jokingly mispronounced the name "Buc-ee's" on TikTok, and let's just say the joke didn't land. Lauren Drewes Daniels
TikTok may be a modern-day phenomenon, but some of its users are stuck in the mid-1800s and believe war has been declared on Texas. The opening shot, apparently, was a Nebraska woman who made a TikTok video where she's heard mispronouncing the name “Buc-ee’s.”

On Nov. 23, Ashley Muller, a stay-at-home mom from Omaha, posted a TikTok video from her account, @crazy.life.of.ash, showing her family’s first trip to Buc-ee’s at a location in Fort Worth.

Muller says they were on their way to visit friends in San Antonio and she made several TikToks at different Buc-ee’s along the way. Her first video went viral because Muller is heard twice mispronouncing the name of the gas station chain as “Buseys” (like Gary Busey) instead of “Buck-ees.”

She’s also heard repeatedly referring to the store’s logo and mascot, which is a beaver, as "gophers." Muller also eats a bag of "beaver nuggets" in the video and asks, "Beaver nuggets? Why do they have those in Gopher Land?"

A TikToker named @Kennyblack1987 reposted Muller’s video, followed by his own, where he is seen saying, “No, ma’am. No ma’am.” Both of their videos have gone viral and have disproportionately upset Buc-ee’s’ exceptionally dramatic (who knew?) loyal customers.

Muller says she was joking and deliberately mispronounced the name of the chain, which was founded in Clute, Texas, in 1982 and is a popular stop for travelers. Buc-ee's is known for its enormous locales and for having the self-proclaimed “cleanest restrooms in America.” (Clearly they have never visited my friend Kerica’s mother’s home in Celina, but whatevs.)

“I actually posted three videos at the exact same time, so that was just the one that went viral,” Muller says. “I couldn't decide which one I liked better, so I posted two joking ones and then the serious one and only the first one got out.”

Muller is adamant that even though she lives in a state that has no Buc-ee’s, which would especially justify her lack of familiarity with the correct pronunciation, she was just being sort of ironic. In one of the other videos, she pronounces Buc-ee's correctly and in the other like "Butch-cheese."

Muller has made subsequent videos saying she was being sarcastic, and in others she’s kept the joke going by showing fake Wikipedia entries she made with her husband referring to the Buc-ee’s mascot as a gopher and its proper pronunciation as "Buseys."

The chain actually met Muller's expectations and she didn't mean to diss the company.

“Yeah, I mean it's a nice gas station with lots of food and things,” she says.

“I never expected anyone to take it quite so seriously considering it's just a gas station, but I just meant it to have fun, not to be so serious,” she says.

"That's the part that I don't appreciate. I can handle people taking it serious and taking it out on me, but it seemed a little far to take it out on my kids, but I was just surprised that it was taken so seriously, ‘cause I thought I was very sarcastic in my voice, but I guess not.”

Meanwhile, millions of Americans go around un-ironically mispronouncing common words like "espresso" without consequence. And then again, Texans are known to mispronounce just about any word. Proudly.

“Well, and also it really opened up my eyes that if I was serious, is that how I would be treated, ‘cause it was not very nice,” Muller says. “But I mean, like, that's the only thing that really surprised me, that if it was a complete accident it's not the reaction I would want.”

The main issue among users, she says, is “the majority of them think I'm being disrespectful. To Buc-ee’s. I don't know, I just feel like there's bigger fish to fry than a gas station.”

Muller’s children are aware of their sudden viral fame and "roll their eyes" at her. But Muller says she hasn’t shown them any rude comments.

“They think I’m the cringey mom that everybody thinks I am, which is probably true," she says. "I mean, you’re a parent, it’s part of your job to embarrass them a little bit, right?"
KEEP THE DALLAS OBSERVER FREE... Since we started the Dallas Observer, it has been defined as the free, independent voice of Dallas, and we'd like to keep it that way. With local media under siege, it's more important than ever for us to rally support behind funding our local journalism. You can help by participating in our "I Support" program, allowing us to keep offering readers access to our incisive coverage of local news, food and culture with no paywalls.
Make a one-time donation today for as little as $1.