Billie Joe Armstrong and his bandmates Mike Dirnt and Tre Cool of Green Day delivered a show in Arlington worthy of the Rock and Roll Hall of Fame. Andrew Sherman
Dallas was the first stop for the rescheduled Hella Mega tour led by three of emo’s legendary acts, Green Day, Fall Out Boy and Weezer, all in one show at the Rangers’ swanky new home base, Globe Life Field.

Despite the resurgence of COVID-19 cases in North Texas, the virus seemed to be the furthest thing from everyone’s minds Saturday as fans packed into the stadium for what was likely the largest music event in the country since the pandemic started. People stood shoulder to shoulder in the pit or were packed like sardines from the floor to the nose-bleeds, nary a face mask to be seen.

As pristine as the new stadium is, however, it wasn’t without some issues for a crowd this size. Getting to and from the floor was an absolute nightmare that took nearly 20 minutes each way even if you preferred to wait in the gridlocked line for the porta-potties on the ground level. “I don’t think I’ll come back here for a concert,” one onlooker was overheard lamenting to his companion. Perhaps he had the right idea.

Inconveniences aside, we, like everyone else, were pumped to hear some great music. Unfortunately, the opening act left much to be desired. You might say that Weezer has coasted on their overplayed cover of Toto’s “Africa” for a while now. You might be right. But they’ve released two full albums since then — OK Human and Van Weezer, the 14th and 15th studio albums of their decades-long career — proving they can still crank out fun original music too.

Rivers Cuomo and Weezer took their 'too cool for school' shtick too far at an otherwise white-hot Hella Mega tour stop in Arlington.
Andrew Sherman
The California natives are known for their laid-back, nerdy-but-cool vibe, and we were really hoping they’d turn on their quirky charm for us with their first live performance in over a year. Weezer seemed to hit the ground running, performing the Green Album’s smash hit “Hash Pipe” and their catchy single “All the Good Ones” from Van Weezer right out of the gate, but frontman Rivers Cuomo and the rest of his band gave us halfway-through-the-tour energy, rather than first-stop-of-the-tour energy.


“All the Good Ones” seamlessly transitioned into a half-hearted rendition of “Beverly Hills,” a track the seasoned musicians should have been able to use to win the crowd back, but instead it fell disappointingly flat. The high point of their hourlong set, believe it or not, was the band’s first-ever live performance of their newest track, “All My Favorite Songs.” Before belting out that number, Cuomo declared “This is the biggest concert in a year-and-a-half in the world. This is the way to debut a song,” one of the very few times he spoke to the audience at all. The claim is actually false, though, as New Zealand hosted a crowd of 50,000 at Eden Park Stadium in April.

They dutifully ran through a handful of their other hits, including “My Name is Jonas,” “The Sweater Song,” “Say It Ain’t So,” “Buddy Holly” and even throwback deep cut “El Scorcho,” to which their many dedicated fans in the audience screamed along, surpassing the band’s own enthusiasm tenfold.

Yes, they did play “Africa.” In fact, Cuomo fumbled over the lyrics in the first verse, but credit must be given for his endearing reaction, locking eyes with bassist Scott Shriner before both of them casually laughed it off. The show must go on, after all. We couldn’t help but wonder if their utter lack of stage presence was part of their “too-cool-for-school” shtick or if they actually just didn’t care.

After a shockingly brief set changeover, fans were treated to the big band energy we had been waiting over a year to experience. From the moment Fall Out Boy appeared on the stage, they clearly meant business. The business of high-production rock and roll, that is. Coming out with flaming pyrotechnics in the first two songs, emo kings Pete Wentz and Patrick Stump, who showed his support for the headliners by sporting a Green Day cap, were all over the stage with animated kicks and spins, eliciting ear-piercing shrieks from throngs of adoring fans. The stage was fitted with a dope virtual backdrop showcasing scenes like a stunning mountain vista, a post-apocalyptic cityscape, molten lava and flaming trees as they blazed through their stacked setlist.

Things slowed down for a fleeting moment as Stump sang the a cappella intro to “Grand Theft Autumn/Where Is Your Boy” from their debut album Take This to Your Grave before the rest of the band joined back in for one of the most impassioned performances we heard all night. Take This to Your Grave along with the Chicagoans’ sophomore album From Under the Cork Tree have paved the way for countless pop-punk bands since the early-aughts, and it was delightful to hear a few favorites from each during their set. Fall Out Boy performed these songs with just as much gusto as they have for the last 18 years, so it’s no wonder this band has cemented their place among the greats, including the Rock and Roll Hall of Famers who would later take the stage.

“Imagine what a mind fuck it is to think we’re on a fucking stadium tour with them (Green Day),” Wentz exclaimed as if reading our minds. “I say that to mean, fucking dream big.”

Stump and Wentz, along with guitarist Joe Trohman and drummer Andy Hurley continued to command the stage with unending charisma and an equally fiery production. One of the biggest “wow” moments came toward the end of the set during their performance of mega-hit “Centuries,” when fireworks were abruptly detonated. 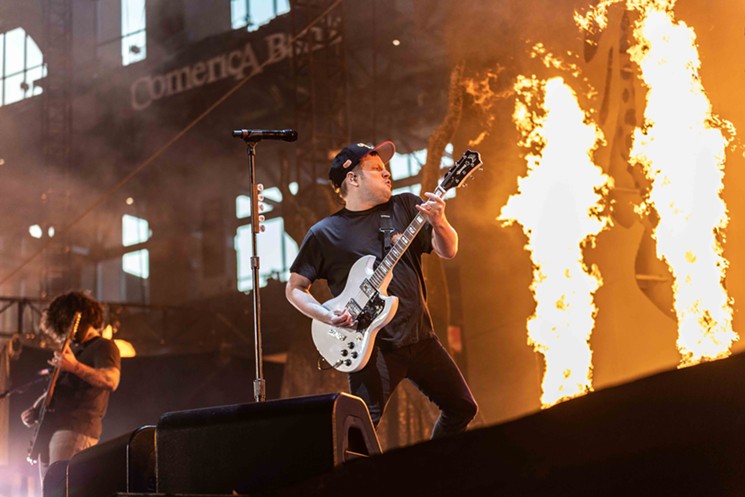 Fallout Boy's Patrick Stump brought more heat to Globe Life Field than the Rangers' pitching roster.
Andrew Sherman
If anyone in the crowd had somehow managed to doze off, they were certainly jolted back awake with that explosive, nerve-wracking display. Fall Out Boy followed that up with a no-frills performance of “Saturday,” another track from their debut album, to close out their set. Interesting choice, but we were here for it, unlike the hordes of people who started to make a beeline for the bathrooms. Wentz won their affections back with ease as he disrobed, revealing a Texas Rangers jersey underneath his hoodie, and made his way into the pit to the pleasure of a handsy crowd for the last few bars of the song.

Green Day is undoubtedly one of the most influential rock bands of our time. Albums like Dookie and Nimrod catapulted a genre that was once relegated to the shadowy underground scene into the mainstream. Billie Joe Armstrong, bassist Mike Dirnt and drummer Tre Cool have managed to harness that rebellious, spirited, I-don’t-give-a-fuck attitude to connect with audiences from all walks of life. That prowess was on full display as they took the stage and made the 40,000-seat arena feel more like an intimate, smoky club.

“We’ve been waiting two fucking years to go crazy,” Armstrong shouted during their opening number. “This is the Hella-fucking-Mega tour!” We lost count of the number of times he yelled “let’s go crazy” over the course of the night, but it was a lot. The punk rockers delivered hit after hit from their massive catalog, including “American Idiot,” “Holiday,” “Know Your Enemy,” “Minority,” “Basket Case” and “Welcome to Paradise,” which were punctuated by bursts of flames and fireworks.

“Take a look around,” Armstrong said. “This is human contact.” The enigmatic frontman pulled two fortunate fans up onto the stage with him during their set. The first fan was treated to the crowd surf experience of a lifetime when he was invited to dive into the pit back to the arms of his receptive comrades. A short time later, Armstrong trolled the pit again, this time in search of someone who could play guitar and was also fully vaccinated. It was unclear which parameter was more difficult to meet, but eventually, one lucky son of a bitch got up there and shredded alongside the band for a few bars before being told he could keep the guitar. 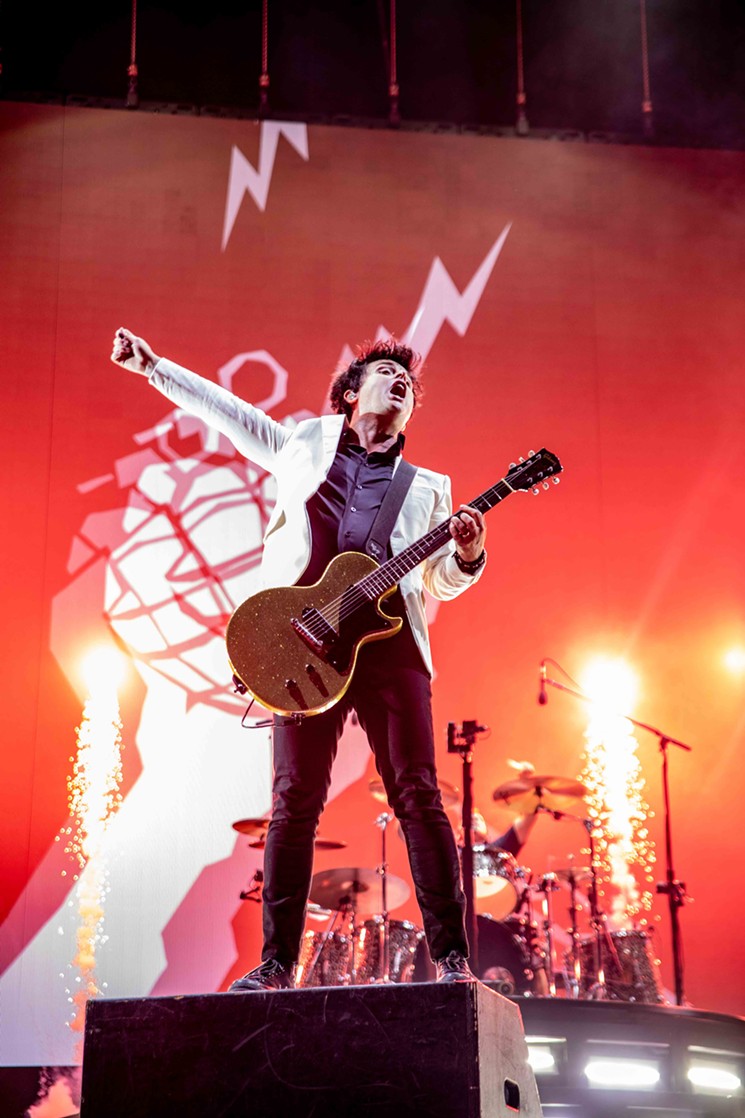 Green Day was the perfect starter for a new day as rock tours return to the road.
Andrew Sherman
It was apparent that the band members were having the absolute time of their lives, which made the show all the more enjoyable. After a flawless performance of “Brainstew,” we found ourselves wishing we had made the drive up to Tulsa last week to witness their impromptu warm-up show at the 1,800-capacity Cain’s Ballroom.

“I’m gonna remember this night for the rest of my life because this is pure joy and pure friendship, and everyone is so happy right now,” Armstrong gushed before leaving us with an acoustic performance of “Good Riddance.” On the last strum of that nostalgic track, the rest of the band came out to take their bows in a blaze of glory as fireworks spewed from either end of the stage. This show was one for the books; here’s to many more like it as we continue to enjoy live music’s comeback.
KEEP THE DALLAS OBSERVER FREE... Since we started the Dallas Observer, it has been defined as the free, independent voice of Dallas, and we'd like to keep it that way. With local media under siege, it's more important than ever for us to rally support behind funding our local journalism. You can help by participating in our "I Support" program, allowing us to keep offering readers access to our incisive coverage of local news, food and culture with no paywalls.
Make a one-time donation today for as little as $1.