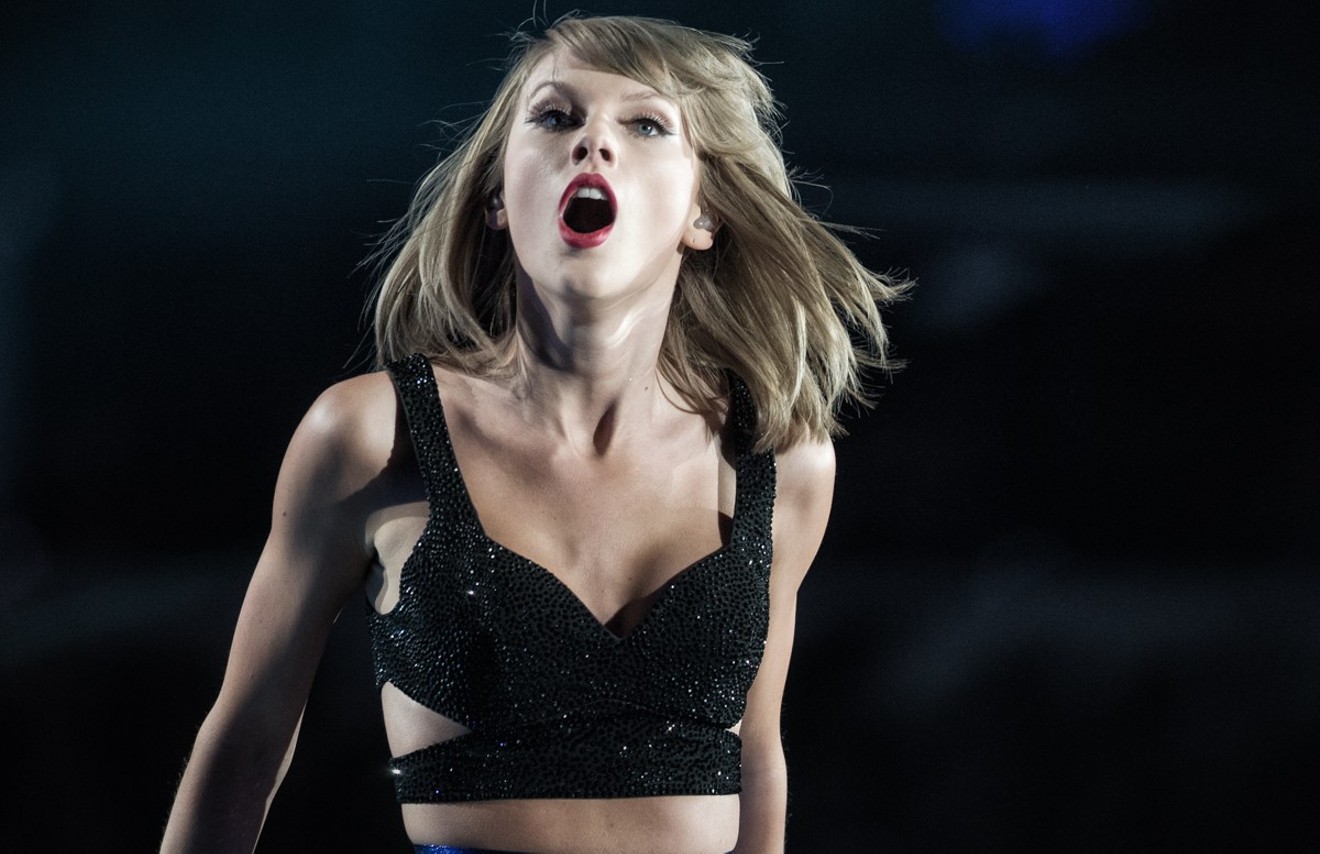 We can't wait to see which musical direction Taylor Swift will be taking next. Our guess is indie sleaze. Mike Brooks
It's no big secret that Ticketmaster sucks. Music fans have endured its bloated prices and unnecessary fees for years. Some bands have even tried to go around it. They failed. The problem just grew like a cancerous mass.

The ticket behemoth continues to gouge patrons with unthinkable prices for shows and allow scalpers and brokers to buy up spots and charge even more for seats in the nosebleeds. Now the company has finally pissed off the wrong group of people: Taylor Swift fans.

The singer's army of fans — also known as Swifties — are loyal to their leader. Ticketmaster didn't just poke the bear once too many times. It put a hornet's nest on the poking stick and gave each Swiftie hornet an even tinier poking stick.

Like Wu Tang, Swifties ain't nothing to fuck with, and if the two got into a bare-knuckle brawl, Vegas bookies would still give 9/2 odds on the Swifties turning the Wu Tang Clan into sausage meat.

The response to Tay-Tay's first concert in four years collapsed the Ticketmaster web page and made the already exorbitant prices reach Scrooge McDuck levels of wealth. The seats for Swift's show next April at AT&T Stadium start at around $450 and just get more and more ridiculous when you get to within squinting distance of the main stage.

This got us thinking. What would one person living in Dallas have to sacrifice for a night of hearing Swift retelling the history of her Match.com dating profile in musical form? That's got to be a lot considering we're living in the middle of one of the most expensive times in the city's history, just when it comes to basic stuff like rent. So we pulled some numbers from the U.S. Bureau of Labor Statistics, compared them to the average ticket prices for the show and did the math for ourselves.

Screw Klondike bars. What would you do for a Taylor Swift ticket? Let's find out.

Very Back of the Upper Concourse: $448
This is what you'll need just as a starting point. It's the place where the Cowboys staff stick their ex-wives on game days. You can have either one of these seats or 26 days of covered grocery bills.

The Winner: Taylor Swift
Eating and drinking just prolongs your problems, even if it makes them seem like they are years away when you're full and wasted. It's better to be able to say you were there when Taylor went back on tour than to eat and drink so much that you can't remember whether you went or not.

Mezzanine: $621
These are the highest points of the stadium's stands on each of its four corners. They'll give you a good bird's-eye view of the concert, which is great if you're an owl. A seat in this section will cost you a month's worth of insurance premiums for your car, health care, house/apartment and any other coverage you have to pay for so insurance companies can hire lawyers to help them weasel out of their responsibilities when you actually need a payout.

The Winner: Taylor Swift
No contest. It's worth the risk. There's no way the state is going to do anything about insurance scams anytime soon, and all you'll give yourself is headaches when you try to do something as brazen as file a claim. If something is gonna make you cry, it's better if it's from listening to Taylor sing "Bigger Than the Whole Sky."

Front of the Upper Concourse: $927
These seats put you a little closer to the action, but you're still gonna have to shell out a considerable amount of money even if you're just going by yourself. You can either have one concert ticket or transportation (including car payment, gas and parking, or public transit, cabs or riding-sharing services) for an entire month.

The Winner: Taylor Swift
You can still get around on your own. If our ancestors could travel on foot through a desert, so can we. Plus, the health benefits of exercise will come in handy when you're fighting your way to the front of a ticket line or cramming yourself into one of those tiny folding seats. After plaid shirt days and nights when she made us our own, you can mail back your things and walk home alone.

Club Mezzanine: $1,125
These are some of the best seats in the whole joint before you start reaching black market, sell-a-body-part prices. Ironically, this one will cost you a little more than what you spend in two and a half months of going out and doing stuff for fun. That includes things like movies, video games, non-civic minded sports and other shows and concerts.

The Winner: Taylor Swift
The fact that you even had to ask which way this clock would wind is a little insulting. One epic, once-in-a-lifetime concert is worth not knowing how the next thousandth Marvel movie franchise ends. Nor are you gonna sit your grandchildren on your knee and tell them about the first time you saw Are You There God? It's Me, Margaret.

Back of the Main Floor: $1,373
We've finally reached sea level, which means we're within shrieking distance of the stage. This one will cost you just over two month's worth of new clothes and shoes.

The Winner: Taylor Swift
Man, this is a real toughie. You gotta have clean clothes or risk being nicknamed "Stinky" at work or getting a charge that puts you on the sex offender registry. Either way, you'll be sad and need an excuse to just listen to Midnights on repeat.

Front of the Main Floor: $1,487
Now things are starting to get a little heavy budget-wise. You're really gonna have to make some sacrifice if you want a seat here, maybe even a Satanic one. A seat in this section will cost you three and a half months of health care costs.

The Winner: Taylor Swift
Medicine may be able to treat your irritable bowel syndrome, acid reflux and fibrodysplasia ossificans progressiva, but only Dr. Swift can treat your broken heart. Also, alcohol helps, and it makes house calls.

Main Field: $5,464
OK, no more fooling around. It's time to really test your mettle for Tay-Tay. It's time to put on your prom dress or hang it up in the back of the closet. You can either have a single seat right in the heart of the action or three and a quarter months worth of rent.

The Winner: The Rent
Have you seen rent prices in Dallas lately? A Taylor Swift concert might be worth being starving, bored, sober and even sick, but not homeless. You can't actually live in your memories of a great concert. Unless you're a Grateful Dead fan.
KEEP THE DALLAS OBSERVER FREE... Since we started the Dallas Observer, it has been defined as the free, independent voice of Dallas, and we'd like to keep it that way. With local media under siege, it's more important than ever for us to rally support behind funding our local journalism. You can help by participating in our "I Support" program, allowing us to keep offering readers access to our incisive coverage of local news, food and culture with no paywalls.
Make a one-time donation today for as little as $1.