Ed Steele
Sixteen months after Dentonites showed up to mourn the loss of one of their most beloved music venues, J&J's Pizza's basement music venue is again open for shows.

"Hey Y'all!! The Ol' Dirty Basement is back!!!" a post to J&J's Facebook page last night read. The first show will be a free pop-up comedy event Friday featuring Josh Johnson and a secret headliner.

In June 2016, J&J's said it was closing the basement for four months to expand its capacity from 49 to 100 and add a new sound system, bathroom, green room and improved air conditioning.

Fans of the venue, which had hosted live music since '94 when it was a Gatti's Pizza, were excited about the upgrades. In its 15 years as the ODB, it established itself as a critical DIY space for Denton, where new bands and young musicians were welcome to play for free pizza and Schlitz beer.

“J&J's is a rite of passage for Denton music,” Matt Battaglia, the founder of Oaktopia fest, said at the time. “If you haven't played J&J's, it's hard to say you're truly a Denton band. It's so awesome that they're renovating one of the most legendary spaces in Texas."

But just two months later, the plans to renovate were quashed. J&J's owners, Jaime and Jessie Ham, revealed that their landlord had a change of heart and was turning the basement into a new business.

“What was meant to serve as the last show before the newly renovated basement opened, will now be the final show to take place in that hallowed underground space,” Jessie Ham said. The space was packed for the Aug. 13 show by Dallas' Triangulum, assumed to be the venue's swan song.

Then, this summer, a rumor arose that J&J's Pizza was preparing to reopen the Ol' Dirty Basement after all. "I haven't heard anything about that," an employee told the Observer in August when we called to investigate. The person took our number, but no one called back.

Now we know the rumor was true.

"Wait whaaattt?!?!?!?! This is amazing," Josh Cinquemani commented on J&J's post, echoing the reactions of many Dentonites who've followed the roller coaster.

What's still unknown is whether any of the renovations to the Ol' Dirty Basement have been carried out or if it is reopening as it was. 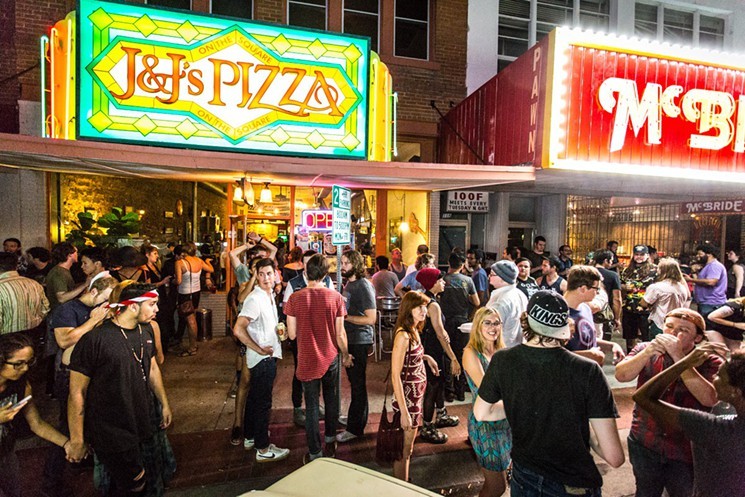 Ed Steele
KEEP THE DALLAS OBSERVER FREE... Since we started the Dallas Observer, it has been defined as the free, independent voice of Dallas, and we'd like to keep it that way. With local media under siege, it's more important than ever for us to rally support behind funding our local journalism. You can help by participating in our "I Support" program, allowing us to keep offering readers access to our incisive coverage of local news, food and culture with no paywalls.
Make a one-time donation today for as little as $1.